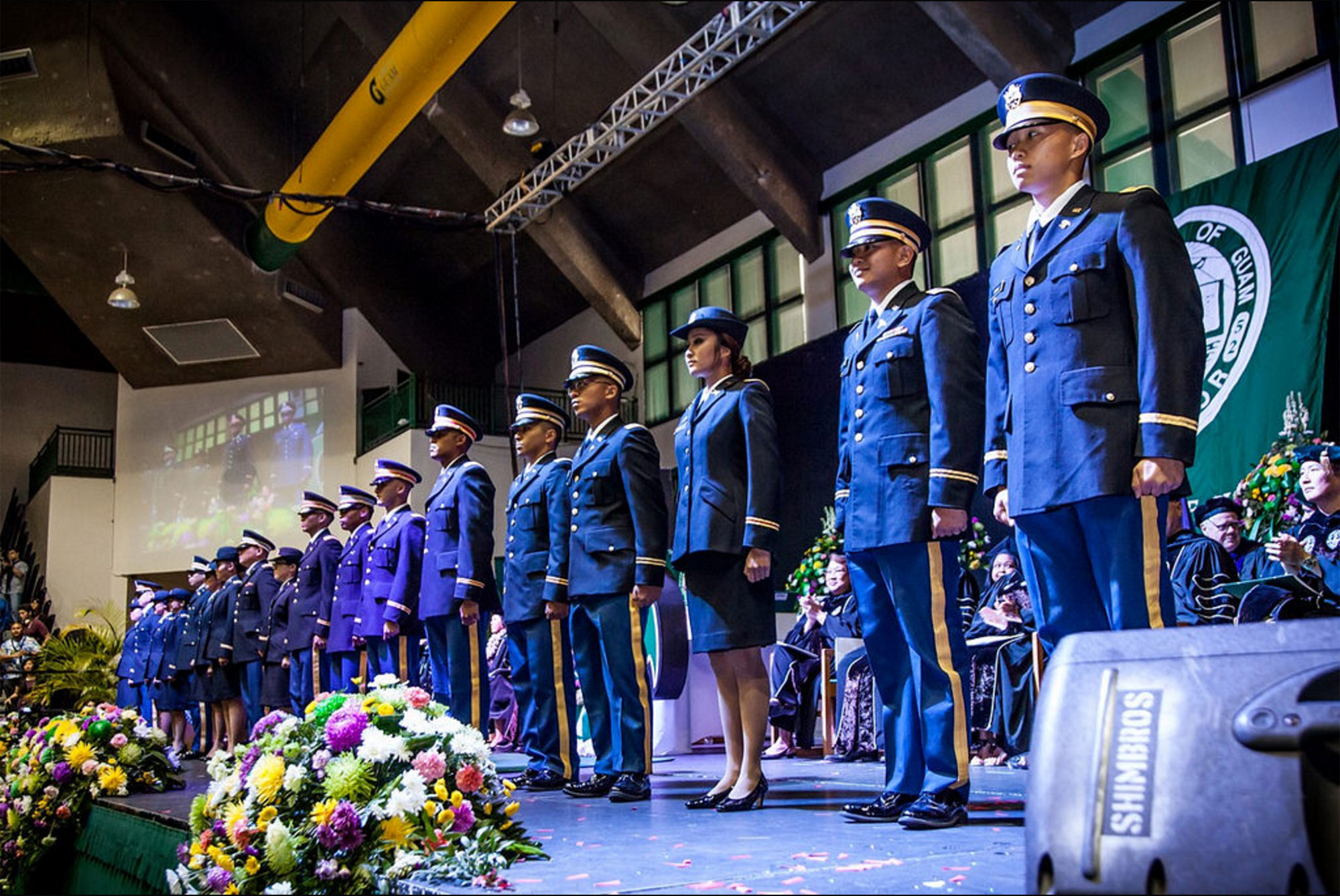 The Army ROTC program was established at the University of Guam on 19 October 1979. Originally christened the Gold Warrior Battalion, the ROTC program’s first military science classes were taught to 44 initial level and 25 secondary level cadets in the Fall of 1980. Enthusiastic participation from the Cadets, top-notch instructions from the Cadre, and great preparation between the University and its Military Science Department quickly forged an ROTC program that was recognized both nationally and locally for the excellence.

In May 1994, the ROTC program was renamed the “Triton Warrior Battalion.” The new name truly conveyed the strength of the ROTC Cadets and Cadre as they continued to achieve fantastic success through the years.

In 2002 the University of Guam was the Department of the Army’s top U.S. Army ROTC program, beating 270 other schools in the nation.

As of 2022, there are more than 400 Triton Warriors finding success in every branch of the U.S. Army Officer Corps and 110 cadets proudly enrolled and learning to lead in the University of Guam’s Army ROTC - The Triton Warrior Battalion.

What is ROTC?
ROTC stands for Reserve Officers’ Training Corps.

History of ROTC
ROTC had its beginnings in the early 19th century, when a handful of colleges offered military instruction to students. By the time the Civil War began, everyone could see the need to develop a source of military leaders and the college campus was a logical place to find those who could quality.

In 1862, the Land Grant Act was passed authorizing grants of public land to state colleges that offered military training for all able-bodied male students. As a result of the legislation, 105 colleges and universities were offering military instruction by the early 1900s. But as our nation became increasingly involved in international affairs, the need for a reserve corps of training military officers was even more apparent.

In 1916, Congress recognized the need for an expanded military reserve to supplement the National Guard, and it passed the National Defense Act.

Consequently, when World War II broke out, ROTC was able to provide the necessary military leadership required for the Army to mobilize.

Later, in Korea and Vietnam, Army ROTC graduates reaffirmed our National commitment to a defense force, led in a large part by citizen Soldiers who had been prepared for leadership campuses for our colleges and universities.

Because of the critical role played by Army ROTC during these periods of conflict, Congress added additional strength to the program with the passage of the ROTC Vitalization Act of 1964

The act provided for the establishment of Army ROTC scholarships, the creation of the two-year program, and the increase in the amount of money ROTC students receive. These additional incentives stimulated enrollment in the program and introduced the rewards of military life to thousand of qualified young students.

Today, Army ROTC opportunities are available across the country in over 270 host units, as well as hundreds of extension centers and cross-enrolled schools.

Inherent in this mission are the following objectives:

Intellectual: To supplement the University’s traditional education with the subjects of value to the student in civil or military pursuits; to teach each Cadet to communicate effectively both orally and in writing; and to motivate Cadets to become leaders throughout their lives.

Moral: To develop in each Cadet a high sense of duty and the attributes of character inherent in leadership which emphasize integrity, discipline, and motivation to succeed in the profession of arms. Ethical leadership is the foundation upon which the service leadership development through the Army ROTC program rests.

Physical: To develop in each Cadet the stamina and fitness essential to a physically demanding career as an Army Officer. Physical fitness is a way of life. Physical fitness improves individual performance through the reduction of stress and improved mental and physical well being.

Military: To provide Cadets with the broad-based military science and military leadership education required as a prerequisite of commissioning. The traditional purposes and ideals are to unite in closer relationship the military departments of American universities and colleges; to preserve and develop the essential qualities of good efficient officers; to prepare ourselves as educated men and women to take a more active part and have greater influence in military affairs of the communities in which we may reside; and above all to spread intelligent, accurate information concerning the military requirements of our country.