Throughout her years at the University of Guam, people would ask Monaliza De Chavez why she worked so hard.

A merit scholar who finished her undergraduate career in three-and-a-half years while double-majoring in Criminal Justice and Public Administration, De Chavez even wonders how she made time for it all.

“At the end of every day I’d ask myself how I got through it,” she said.

But the secret to her success—besides her exceptional organizational skills, the Post-it notes she carries with her, and the calendar on her smart phone—is a principle she’s taken to heart since a very young age.

“My mom who’s Filipina would say, ‘You got to go to school. I didn’t come to Guam for you to not take it seriously,’” she said. “Coming from a home where education was very important, I just couldn’t see myself doing anything else.”
Because of her determination and will to learn, De Chavez finished at the top of her class and was named valedictorian for the University’s Fall 2015 Commencement Ceremonies.

Alongside 261 other Tritons, De Chavez walked across the big stage on Sunday, December 20 in the newly renovated Calvo Field House to receive her diploma.

Nervous, she noted in her speech that although she’d given many presentations in her Criminal Justice and Public Administration classes, “this was by far the most difficult speech I ever had to prepare for out of all the research papers and presentations I have done.”

But it was nothing compared to the hours and effort De Chavez poured not only into her schoolwork and extra curriculars, but her family as well.

A mother of three children, ages six, one-and-a-half and four months, De Chavez said her children are her greatest inspiration.

“My children are my greatest motivators,” she said. “I want to be able to work and have time with my kids.” 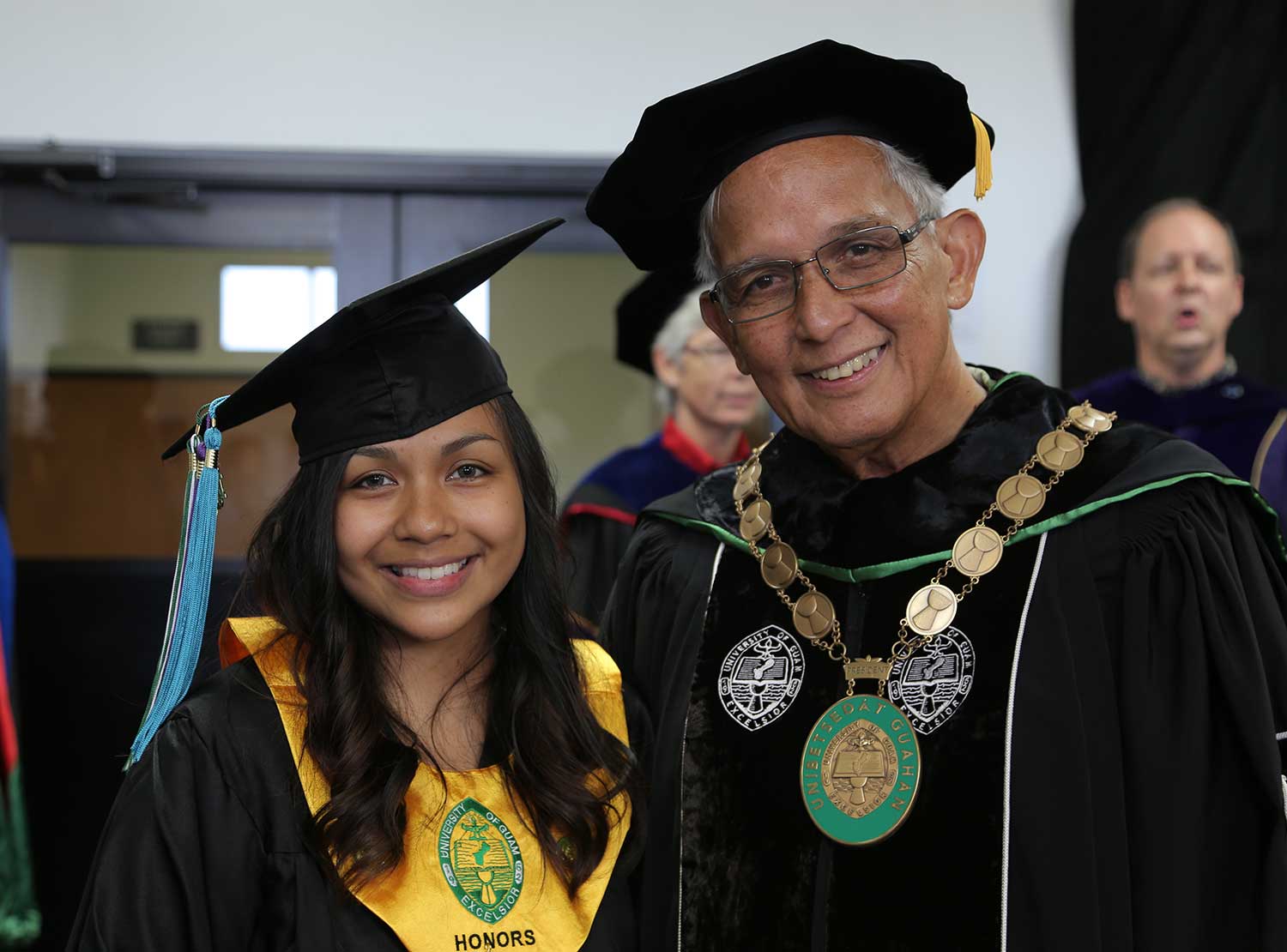 De Chavez said since the seventh grade, she has wanted to join law enforcement in some capacity.

“I really like law,” she said. “I like the field work, the action, the adrenaline. I grew up around it. Throughout my entire life, being exposed to someone in law enforcement—my stepdad—I felt that was my calling.”

Answering that call meant joining the Public Administration and Legal Studies Society, earning the grade point average for acceptance into Lambda Psi, the criminal justice honor society, and participating in the Justice Corps Program of AmeriCorps at the Judiciary of Guam.

But in the future, De Chavez hopes to move beyond the paperwork to more gritty work—investigations, interrogations, and cold cases.

“I want to help people,” she said. “I want to bring people to justice.”

She also hopes to attend graduate school with the possibility of studying sociology and social behaviors, but because of her family, she’d like to stay as close to home as possible. Surrounding herself with that kind of love and support was what helped her through her undergraduate years.

“Honestly, there’s really no place like home,” she said. “I think I would have lost my mind somewhere else. I wouldn’t be where I am today without them and the support of my professors at UOG.”