From Introvert to Emerging Leader 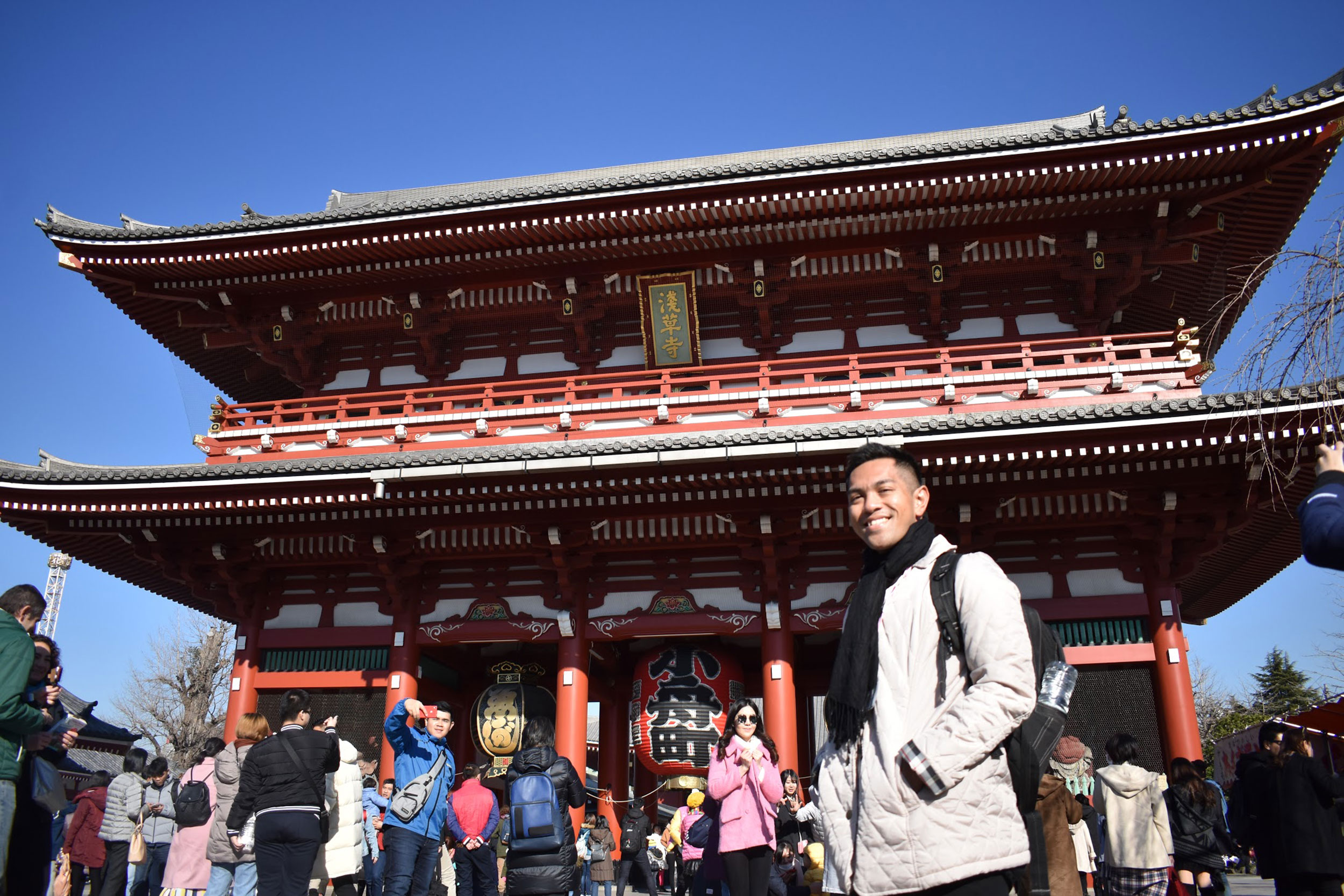 Second Lieutenant (2LT) Jhon Michael Delfin, credits his experience at the University of Guam as a springboard for a service-oriented career in the health and military sector.

Delfin graduated from the UOG-School of Health (SOH) with a Bachelor of Science (BS) Health Science degree with a concentration in Pre-Physical Therapy in Fanuchånan (Fall) 2017.

At the time of his graduation, the self-described introvert was also recognized as an ROTC Distinguished Military Graduate. Recipients of the award are in the top 15 percent of all ROTC graduates all over the nation.

While at the University, Delfin juggled his time as a member of the Army ROTC Triton Warrior Battalion and as a student in the UOG-SOH program. Both disciplines provided him with opportunities to serve the community in different capacities.

Following graduation, Delfin participated in a Medical Services Basic Officer Leader Course (BOLC) from January 6 until March 16 in preparation for his first assignment to a Combat Support Hospital in South Korea. He describes his first assignment as a convergence of his interest in health and military service. 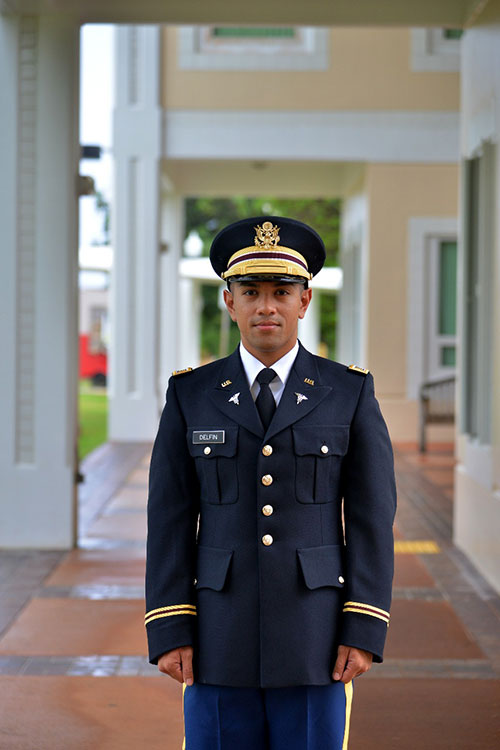 Delfin joined the UOG Army ROTC program during his freshman year in Fañomnåkan 2013. He went through the progressive route, starting as a freshman at the MS1 level, then working his way up to MS4 and MS5 levels.

“One thing that made me different from a UOG student is ROTC. With the program, you are living two lives. You have your UOG side, where you are finishing your degree in your respective field. On top of that,  you also have your ROTC experience,” he said.

His hard work paid off with a recognition as an ROTC Distinguished Military Graduate. According to Delfin, he competed with individuals from nearly 300 schools all over the U.S. They were evaluated based on their ROTC performance, overall academic performance, leadership abilities, and community involvement.

ROTC program cadets are no stranger to volunteer work.  The cadets often participate in beach clean-ups as part of their mentorship program. During the University’s Charter Day and other events,  the cadets are often tasked to perform as color guards and to conduct tactical demonstrations for the community,

“I was not the most outgoing. I was not the most active when I came into the program. In a way ROTC helped me achieve what I wanted --- in terms of physical fitness, being more socially active, and just developing my interpersonal skills,” he said.

Lt. Col. Christopher Rivers, UOG Professor of Military Science said the UOG Army ROTC program encourages students to strive to become a scholars, athletes, and leaders.  “2LT Delfin in his performance exceeded all three of these areas at UOG and within the ROTC program,” he said.

Giving Back to the Community

Delfin’s interest in the health sciences deepened as he progressed through the Pre-Physical Therapy program.

During his last semester as a UOG-SOH senior, Delfin participated in the Kakehashi program, which was coordinated by the Japanese American Citizens League (JACL) and the Japan International Cooperation Center (JICE).

Kakeshi, which means “bridge” in Japanese, sought to immerse participants from other nations in the local culture, economics, history, society, and politics of Japan. The activities were a mix of educational tours, cultural activities, lectures, and workshops.

According to Delfin, he was part of the first group of participants from Guam. Their group stayed in Japan from December 18 to 26. “We were exposed to things that people who go to Japan won't be able to see. The homestay experience, participating in a lot of ceremonial events,” he said.

During the trip, Delfin saw Japan outside its urban context by spending several days living in a rural farming community in Kamogawa, Chiba prefecture. 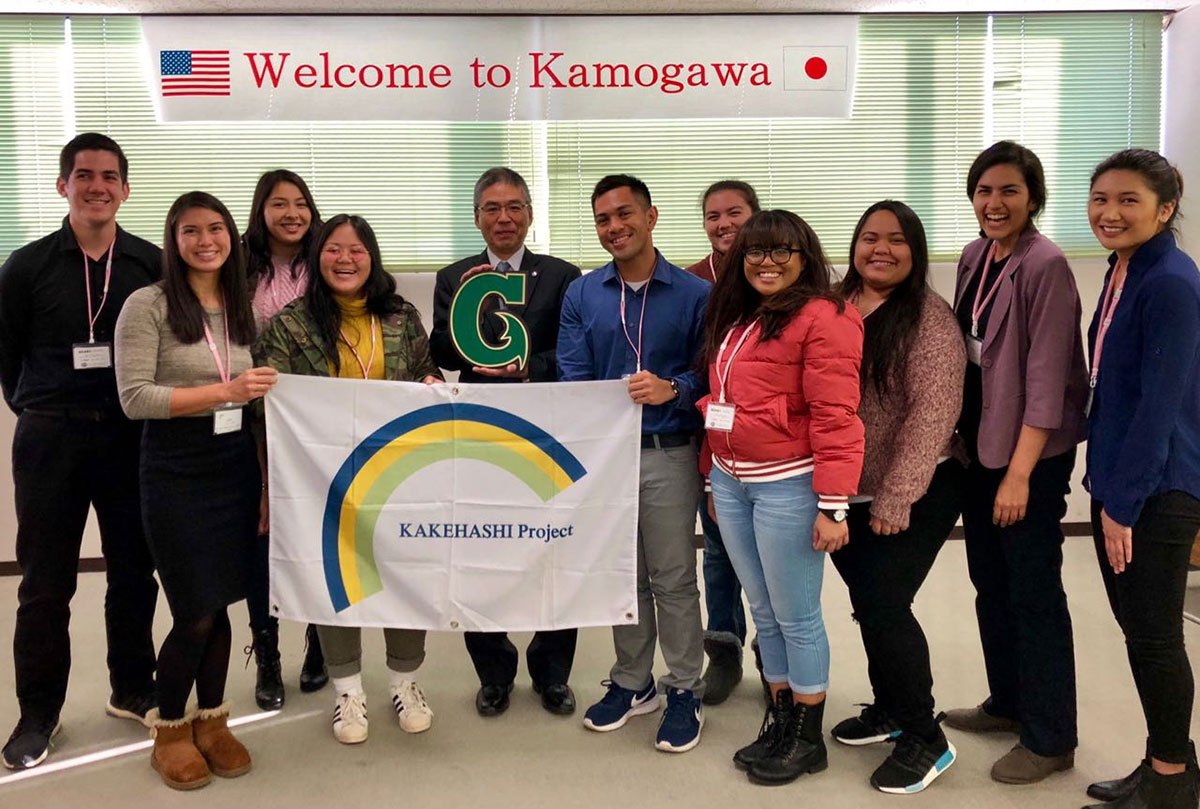 “We learned things that were not available through social media, through the internet, or through the web. We homestay with one of the local farmers in the community. We learned about the ordinary lives of the farmers in Japan,” he said.

During his last semester at the University, Delfin also volunteered for two weeks at Catholic Social Services, a faith-based nonprofit that assists vulnerable members of the community.

Through the mentorship of UOG-SOH Dean Margaret Hattori-Uchima, Delfin participated as a lecturer in a series of dementia care training conducted by the UOG-SOH team for CSS's senior services division.

“I was fortunate to work directly with Delfin when he volunteered to assist in teaching family members and caregivers of the elderly in our community,” Hattori-Uchima said, adding “I was impressed with his enthusiasm and willingness to share his knowledge.”

As a pre-physical therapy major, Delfin lectures focused on introducing exercise activities for people living with dementia. Loved ones and staff who serve as caretakers are taught how to facilitate these activities.

“I would like to eventually come back (to Guam) because there is a really high demand for any type of therapists on Guam. I would like to serve, give back to my community in that way,” Delfin said.

“That is just one component of physical therapy. From that workshop, it helped me to effectively communicate, effectively interact with them (people living with dementia).  I enjoyed my time volunteering and helping out,” he said.

According to Hattori-Uchima, Delfin went above the course requirements by volunteering to assist even after meeting his minimum internship hours.

Through the experience, Delfin personally saw the need to fill a gap in physical therapy programs for seniors and other sectors. For this reason, he wants to apply for admission to the Physical Therapy program at Baylor University, a military-sponsored school in Texas in the future.

After completing the program, he plans to go back and serve the island community.

“I would like to eventually come back (to Guam) because there is a really high demand for any type of therapists on Guam. I would like to serve, give back to my community in that way,” Delfin said.

For Hattori-Uchima, Delfin exemplifies the Triton spirit.  “I know he will be a success in his future endeavors,” she said.