Home » MARC » Board of Advisors 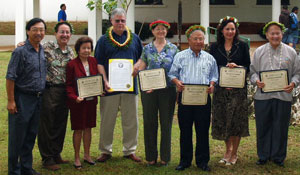 Dr. Hiro Kurashina is the Emeritus Director of MARC, appointed by the Board of Regents and the President of the University of Guam in 2004. Dr. Kurashina served as the Director of MARC for 12 years from 1991 to 2003. Initially employed by UOG in 1980, he was a full-time faculty member until he took on the administrative position at MARC. Dr. Kurashina earned his Ph.D., M.A. and B.A. in Anthropology at the University of California at Berkeley with an emphasis in Old World Archaeology. He graduated with honors both in general scholarship and Anthropology. He was inducted to the Alpha Chapter of Phi Beta Kappa of California upon graduation. As a graduate student, Dr. Kurashina was a member of an Archaeology Field School in the Levant in the Near East under the auspices of the Smithsonian Institution. With financial support from the National Science Foundation, he spent several field seasons conducting paleo-anthropological research as a member of the UC Berkeley Expedition to the Afar Rift under the direction of Dr. J. Desmond Clark. The research in East Africa resulted in two co-authored publications in the British Scientific Journal Nature. Dr. Hiro Kurashina received a grant from the National Geographic Society to direct an archaeological research and student training project at Tarague Beach in northern Guam from 1980 to 1984. From the mid to the late 1980s, Dr. Kurashina and Dr. Rebecca A. Stephenson in collaboration with Dr. Yosi Sinoto of the Bernice P. Bishop Museum directed an Earthwatch Project in the Cook Islands with funding from the Center for Field Research and the South Pacific Commission. At the invitation of the Bernice P. Bishop Museum in Hawaii, Dr. Kurashina was a Visiting Scholar there in the mid 1980s. More recently, Dr. Kurashina has served as an Adjunct Affiliate Member of the Balinese Project co-directed by Dr. Agustin Fuentes of the University of Notre Dame and Dr. Rebecca A. Stephenson. Recent writings of Dr. Kurashina include chapters in books published by the Cambridge University Press, Gadja Mada University Press, Academic Press, Mayfield Publishing, Co. and others. He has recently served as a Consultant for the National Endowment for the Humanities in Washington, D.C. He was a Charter Member of the Guam Preservation Trust and he has continually served on the CNMI Historic Preservation Review Board since its inception in 1983. He is a recipient of the CNMI Governor’s Lifetime Achievement Award through the NMI Council for the Humanities, the Japanese Foreign Minister’s Award, a Guam Legislative Resolution, and a Congressional Record Citation in the U.S. House of Representatives. He now co-chairs the MARC Advisory Council with Dr. Lorraine Yamashita. He is an honorary member of the Board of Directors of the Chinese Chamber of Commerce of Guam, and a member of the Research Committee of the Guam Visitors Bureau.

Other Pertinent Comments: Married to Simon Sanchez, mother of 2, grandmother of 5.

Other Pertinent Comments:   Married to Antonio Yamashita, mother of 2, grandmother of 3.

Her strength in developing strategic and tactical direction, visionary and proven leadership, team building, and her aggressive passion and commitment to the Guam Visitors Bureau, its membership and the people of Guam have been the foundation of her continuing success. In addition to accomplishments promoting and branding Guam as a premier travel destination, Pilar also provides leadership support to the national and state tourism offices of the Micronesia island nations. Pilar is currently Chairperson the Pacific Asia Travel Association (PATA), Micronesia Chapter.

Andrew T. Laguaña is part of the first generation of island-born architects, and the first Chamorro elevated to Fellow status of the American Institute of Architects. He is the first Guam architect to chair a region (Region 6) of the National Council of Architectural Registration Boards.
Also a past member of the University of Guam's Board of Regents.
Former member and chair of the Guam Historic Preservation Review Board and the Guam Preservation Trust.

He was previously affiliated with the San Francisco Office of Hellmuth, Obata & Kassabaum Architects for 14 years, serving as Vice President and Senior Project Designer. In 2006, the architectural firm of Laguaña + Cristobal was selected to design the permanent home for the Guam Museum. Laguaña is currently the Principal of his firm, Architects Laguaña, LLC.

In 2012 he was presented with the Governor’s Award in recognition of his dedicated service to the people of Guam and positive contributions to the island community.