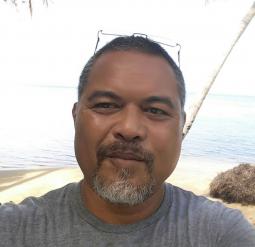 Larry Raigetalinstallment in its seminar series, featuring a lecture by Larry Raigetal. Born on the island of Lamotrek in the Central Caroline Islands, he left home in his mid-teens for formal education in the United States. He earned his undergraduate degree from the University of San Francisco and a graduate degree in International Relations from the University of Oxford.

Raigetal is also the founder of Waa'gey, where he has worked with his elders for nearly ten years to transfer canoe-building skills to the young people of Yap. Through his father and others from the carving school "line of the rats," he earned the title "selap," Yapese for master canoe carver. Through his grandfather and after making a voyage to Guam for FESTPAC 2016, he was initiated in a "Pwo" ceremony as a master navigator under the mast of Weriyeng.

Event at a glance
MARC Seminar Series featuring:
Pwo Larry Raigetal - “Looking for alternate solutions.”
Tuesday, December 12, 2017
Doors open at 6 p.m. Lecture begins promptly at 6:30 p.m.
College of Liberal Arts and Social Sciences (CLASS) Lecture Hall on the UOG campus.
The lectures are open to the public, free of charge and held on Tuesdays of every month beginning at 6:30 p.m. The lectures will be prerecorded and edited by Rlene“Live” Productions and aired on YouTube and PBS Guam.
MARC Seminar Series began in the 1970s as a way to promote the Micronesian Studies Program and encourage interest in the people, culture, history, and language in this region.  MARC is considered a world-class research facility for social sciences and humanities studies of the people of the Marianas and Micronesia.
News Categories