Home » News & Announcements » Down in history: UOG memorializes the builders of the Calvo Field House 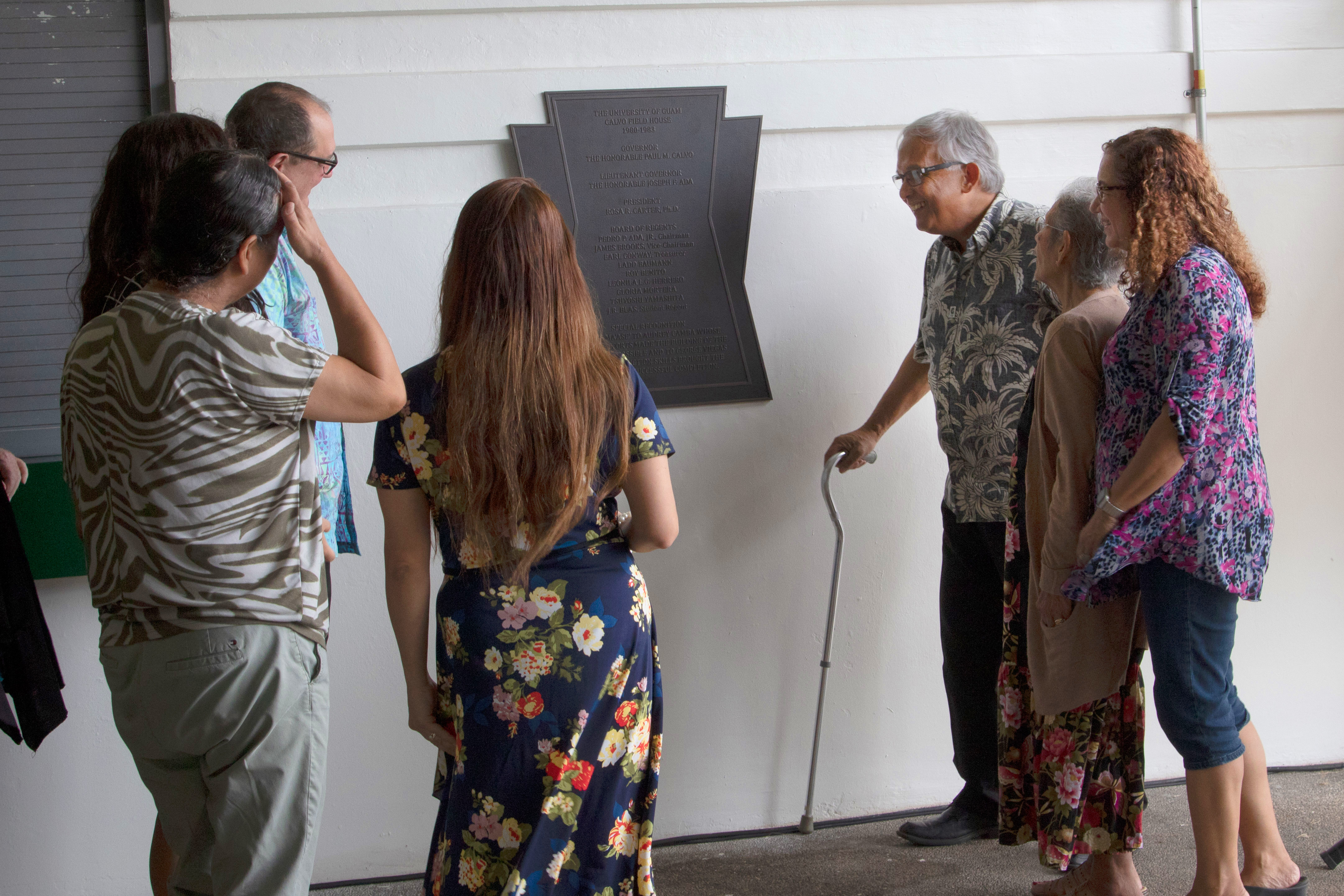 The families of Audrey Camba and George Viegas view the plaque installed at the Calvo Field House in honor of Camba's and Viegas's efforts getting the field house built. 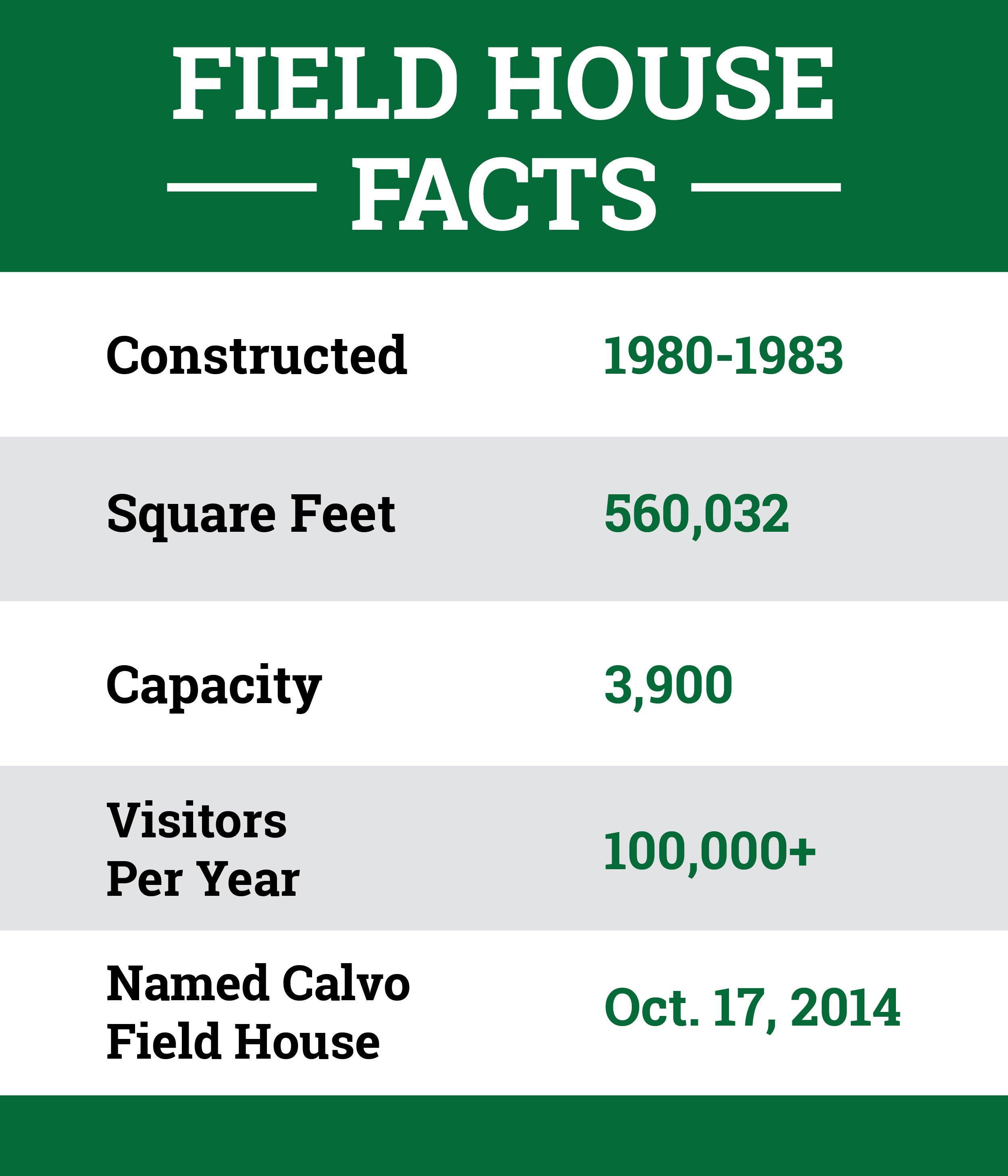 “So many times, people think history began just before they showed up,” Dr. Robert Underwood, outgoing President of the University of Guam, told an intimate crowd at the Calvo Field House on Aug. 3, 2018. “But there’s a whole lot that happened before we showed up,” he continued, alluding to the many people in prior years who navigated uncharted paths, made difficult decisions, and ultimately established what the community has today.

A few of those people in the University of Guam’s history were Audrey Camba and George Viegas — two individuals who were vital in the funding and construction from 1980–1983 of the Calvo Field House, a building that has been well-utilized and enjoyed for community and University events the past 35 years. Underwood, in one of his last projects as President of UOG, wanted to memorialize the builders of the Field House — Camba, Viegas, and the Board of Regents and president at the time, Rosa R. Carter — with a plaque at the building’s entrance in their honor.

Camba, who moved to Guam as a young woman from England in the 1950s and married into the Bordallo family, was detailed to the Calvo Field House project when she was working for the Chairman of the Guam Legislature’s Committee on
Education, Sen. Frank Santos.

“She was an excellent writer,” her daughter, Renata Bordallo, recalled. “She was a grant writer before the job existed.”

Her primary job on the project was to secure funding. “And she did,” Underwood said, though that was only half of the battle. The other half, he said, was an even more challenging feat: protecting the money she brought in from being used for other purposes, which she managed to
do as well.

Bordallo said of her mother, who passed away in 1985, “Guam gave a lot to my mother, and she, in turn, gave a lot to Guam. When [the project] was all done, she was so proud.”

Viegas was the facilities manager for the University at the time the Field House was just getting underway. He was organized, knowledgeable, and committed, Underwood said. So when the contractor was not performing well, and it was clear the project was going to collapse or be awarded to another contractor, “George stepped in, and he personally oversaw the project to its conclusion,” Underwood said.

Viegas’s daughter, Laura-Lynn V. Dacanay, said taking the lead on the project was true to his character. “It wasn’t his job as plant manager to look over this project,
but he took the initiative,” she said, “and now we have a Field House to enjoy.”

The building, with 560,000 square feet and a cone-shaped roof to assist air ventilation, is specifically designed to host large crowds. It has been used over the years to host sporting events, graduations, concerts, charity events, beauty pageants, job fairs, and political debates.

“This building holds a special place in the hearts of anyone who has been associated with the University in the past 35 years,” Underwood said.

A large bronze plaque at the main entrance was unveiled before family members of Camba and Viegas on Aug. 3. It will remain there as a reminder of the people whose skills and dedication brought it into being.

“Every building has a back story — it has unsung heroes whose names don’t appear on plaques,” Underwood said. “But we will put their names up there so that people who use this facility understand the heart and soul of the building of the UOG Calvo Field House. … This building has come a long way, and it has a long way to go.”