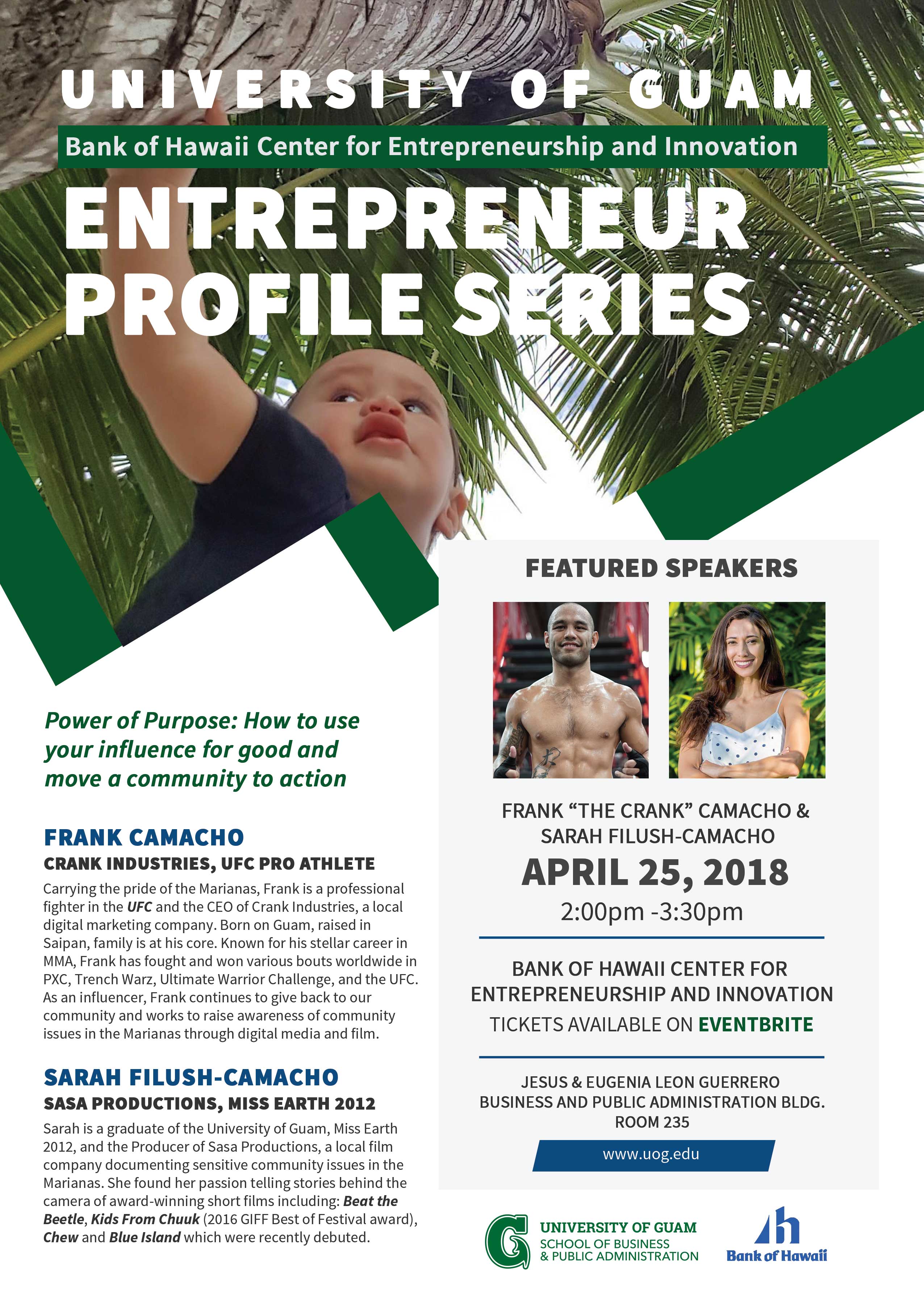 Power of Purpose: How to use your influence for good and move a community to action

The University of Guam Bank of Hawaii Center for Entrepreneurship and Innovation (C4EI) invites you to join us in welcoming Frank "The Crank" Camacho and Sarah Filush-Camacho. Frank is a professional MMA fighter in the UFC and the CEO of Crank Industries, and Sarah is a graduate of the University of Guam, Miss Earth 2012, and the Producer of Sasa Productions. Each month, C4EI highlights stories of local entrepreneurs to share their experiences of risk, reward, success and challenges in their budding small businesses.

Carrying the pride of the Marianas, Frank is a professional fighter in the UFC and the CEO of Crank Industries, a local digital marketing company. Born on Guam, raised in Saipan, family is at his core. At the age of 5, he fell in love with golf and 10 years later began training in Mixed Martial Arts (MMA). Known for his stellar career in MMA, Frank has fought and won various bouts worldwide in PXC, Trench Warz, Ultimate Warrior Challenge, and the UFC. In 2015 he spearheaded “Crank’s Relief Effort” rallying the community to action collecting emergency supplies for Saipan residents effected by Typhoon Soudelor. In 2017, he mentored at-risk youth in a three-day anti-bullying campaign in Guam. As an influencer, Frank continues to give back to our community and works to raise awareness of community issues in the Marianas through digital media and film.

Sarah is a graduate of the University of Guam, Miss Earth 2012, and the Producer of Sasa Productions, a local film company documenting sensitive community issues in the Marianas. Sarah is the Producer for Beat the Beetle, a 2015 short documentary to spread awareness of the rhino beetle epidemic in Guam. In 2016, she produced Kids From Chuuk, a short film focused on a local musical group of students from Simon Sanchez High School, which won the 2016 GIFF Best of Festival award. She also produced two documentaries, Chew and Blue Island, which focused on regional health conditions such as Oral Cancer and Autism, both growing health epidemics in the Marianas.

This event is FREE and open to students, faculty, business professionals, and entrepreneurial enthusiasts. If you're curious of the journey of this tight knit husband and wife duo, and how they achieve work-life balance by staying true to their core values, this is a networking session you won't want to miss. Sign up and save your seat today!