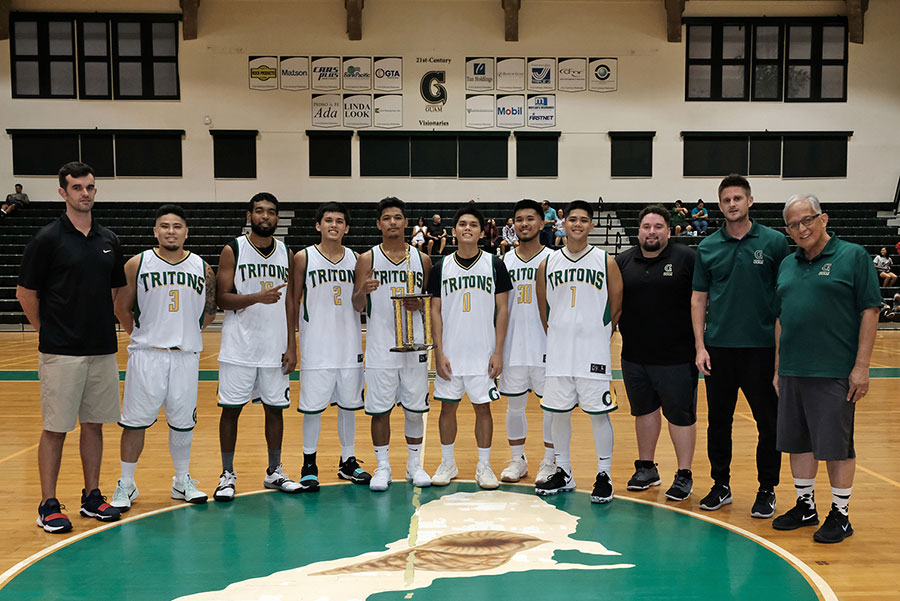 The University of Guam Men's Basketball Team won the Guam Men's College Basketball League on Saturday afternoon in the UOG Calvo Field House as they defeated the UOG Recreation Program Trident Men's Basketball Club 92-74 and finished the 2017-18 academic year with a 30-0 record.

The Tritons won the GMCBL for the 2nd straight year with a 10-0 record and it was their 3rd victory over the Tridents for this season, the Tridents are the University's Club Team which finished 2nd in the league for the 2nd year as well with a 6-4 record.

The Tritons started slow, while the Tridents had a good start to the game and led by as many as 12 points early in the game. But the Tritons came back and tied it at 30-30 and were tied at 32-32 but the Tritons never gave up the lead from there, going into half-time with a 43-38 lead and expanding the lead in the 2nd half.

Ryan Naugauta led the Tritons with 34 points, scoring 21 points in the 2nd half. Geno Anderson added 21 points for the Tritons while A.J. Carlos scored 16 and Raffy Sablan added 14. The Trident MBC was led by Jude Martines with 28 points and Elias David scored 13 points.

The UOG Tritons for the year, won the Guam Basketball Challenge (8-0), the Triton League (12-0) and GMCBL (10-0) for their 30-0 record. Most considered the Tritons the best men's basketball team on the island in the fall, when they had their full roster of 13 players. The Tritons finished with 7 players on the final day of their season.