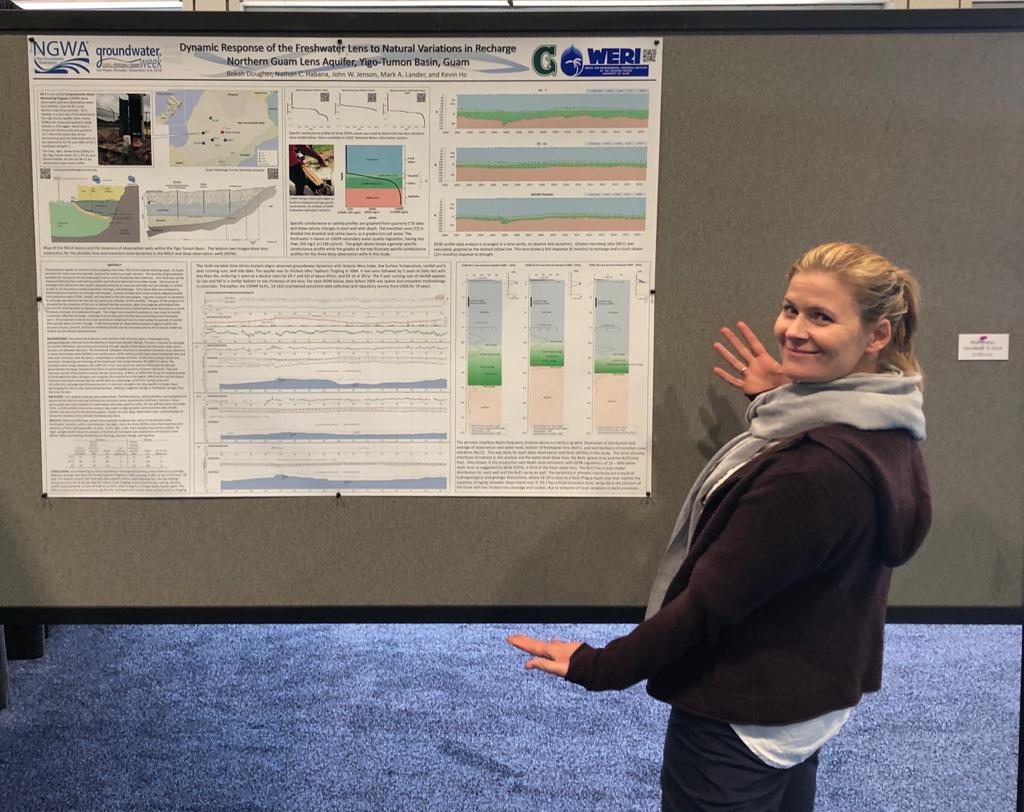 Bekah Dougher, a graduate student in the University of Guam’s Master of Environmental Science program, displays her poster presentation at the National Groundwater Association’s Groundwater Week conference held in December in Las Vegas. She won the Farvolden Scholarship Award for her presentation.

The latest annual Groundwater Week conference held by the National Groundwater Association in December in Las Vegas brought opportunities and rewards for the University of Guam. Two faculty and three graduate students were selected to give poster presentations on their research, and environmental science graduate student Bekah Dougher came away with the Farvolden Scholarship Award for her presentation on how storms and droughts affect the water supply in Guam’s aquifer.

“Getting this award was such an honor because we’ve worked really hard on this project, and it meant that what we are doing here on Guam is also of interest to others around the U.S.,” Dougher said.

"Bekah’s research is the first to take advantage of the nearly 40-year record that WERI and the U.S. Geological Survey have been collecting from seven deep observation wells first installed in 1982." - Dr. John Jenson

“Bekah’s research is the first to take advantage of the nearly 40-year record that WERI and the U.S. Geological Survey have been collecting from seven deep observation wells first installed in 1982,” said John Jenson, director of WERI, or UOG’s Water & Environmental Research Institute of the Western Pacific, “and it provides the first answers to these kinds of questions based on a comprehensive study of a long-term historical record.”

He said her findings will serve as a benchmark reference for local aquifer managers and engineers, but the findings are also of general scientific interest as “the first historical study of its kind to capitalize on a high-quality multi-decadal record.”

Dougher will present her research in its entirety in April when she defends her thesis for her Master of Environmental Science degree.

“We got a ton of positive feedback about the poster and this project,” Dougher said. “People were really interested in looking at lens history and dynamics as a way to possibly predict lens behavior in the future. This project is another piece in the development of sustainable management policies.”

The groundwater conference was attended by professionals and scientists from more than 30 countries.

They also attended workshops and seminars on topics of value to Guam and WERI’s work in Guam, including groundwater remediation, karst hydrology, and contaminants.

“The conference was a great opportunity to introduce current water issues in Guam and to learn about major water issues in the United States and other countries,” Jenson said. The Water & Environmental Research Institute of the Western Pacific is one of 54 institutes established by U.S. Congressional legislation at each land-grant university in the United States and is one of the top-ranked National Institutes for Water Resources. It is the only research center of its type in this geographic area, where it facilitates and conducts research to address water problems and improve efficiency associated with freshwater resources in Guam and the Western Pacific.