Home » News & Announcements » Rise Above: How a UOG alumnus found his voice for the big stage 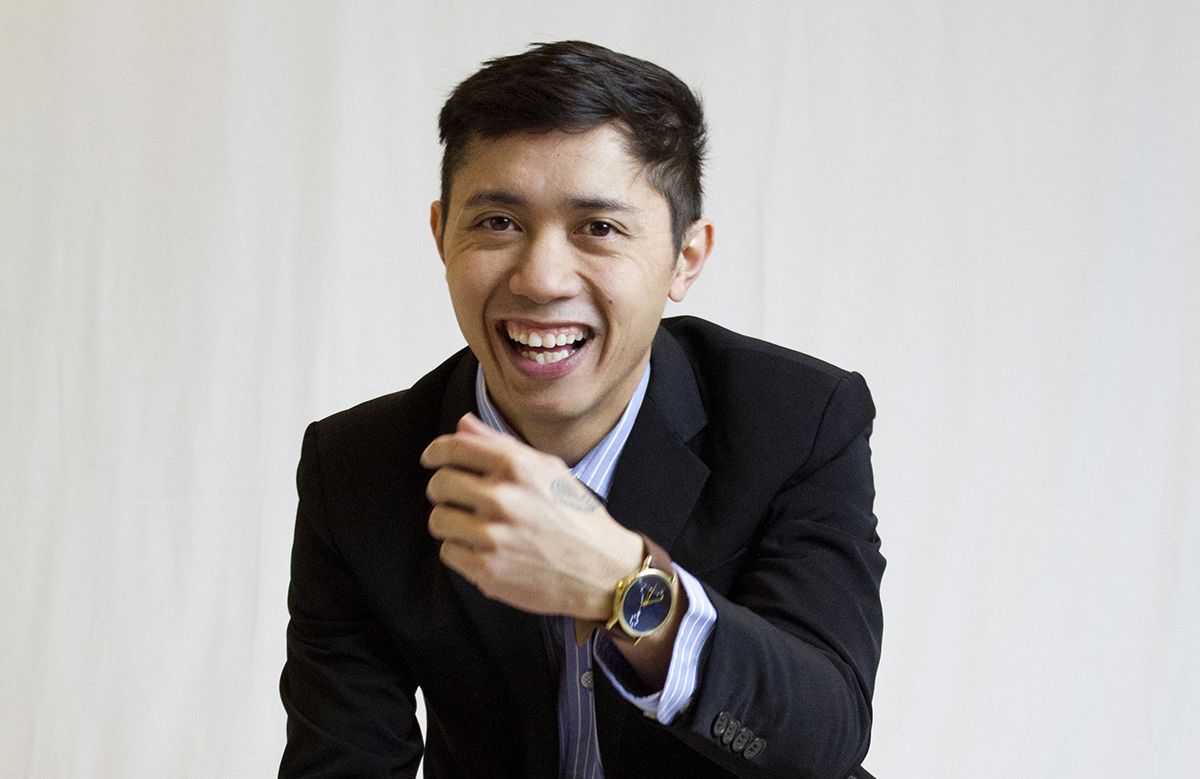 “One of the first things I learned in Kindergarten was that you couldn’t find Guam on a globe without using a magnifying glass… Imagine a half-grown child standing on shore staring at the expansive horizon and realizing a single grain of sand is bigger than his home on a map.”

Proudly and prominently wearing a sinahi necklace, Meta Sarmiento stood on stage, all eyes of a packed Denver auditorium on him — a shorter than average man from a smaller than average island. But he didn’t need stature to captivate the audience. His choice of words and artistic intonation were met with intrigue as he gave a 10-minute TEDx Talk on how a small kid from a small island found strength and purpose in a much larger world.

From classrooms to world-class theaters, the world after graduating from the University of Guam has been a stage for Sarmiento. In addition to the TEDx event in 2017, he has performed and won awards at spoken word poetry and rap competitions in Guam, Indonesia, France, and the United States. He has been a headline or keynote speaker at various festivals, produced the Guam International Film Festival award-winning film “You Deserve Tomorrow,” released two hip-hop albums, and become an educator for youth and adults alike.

With his message often one of overcoming and persevering, Sarmiento has become a role model for students who dream big.

“Smallness is a state of mind that breeds feelings of weakness and inadequacy,” he told the TEDx audience. “… [But] size is not the final measurement. True strength is defined by the depth of our character and of our potential.”

From passion to performance 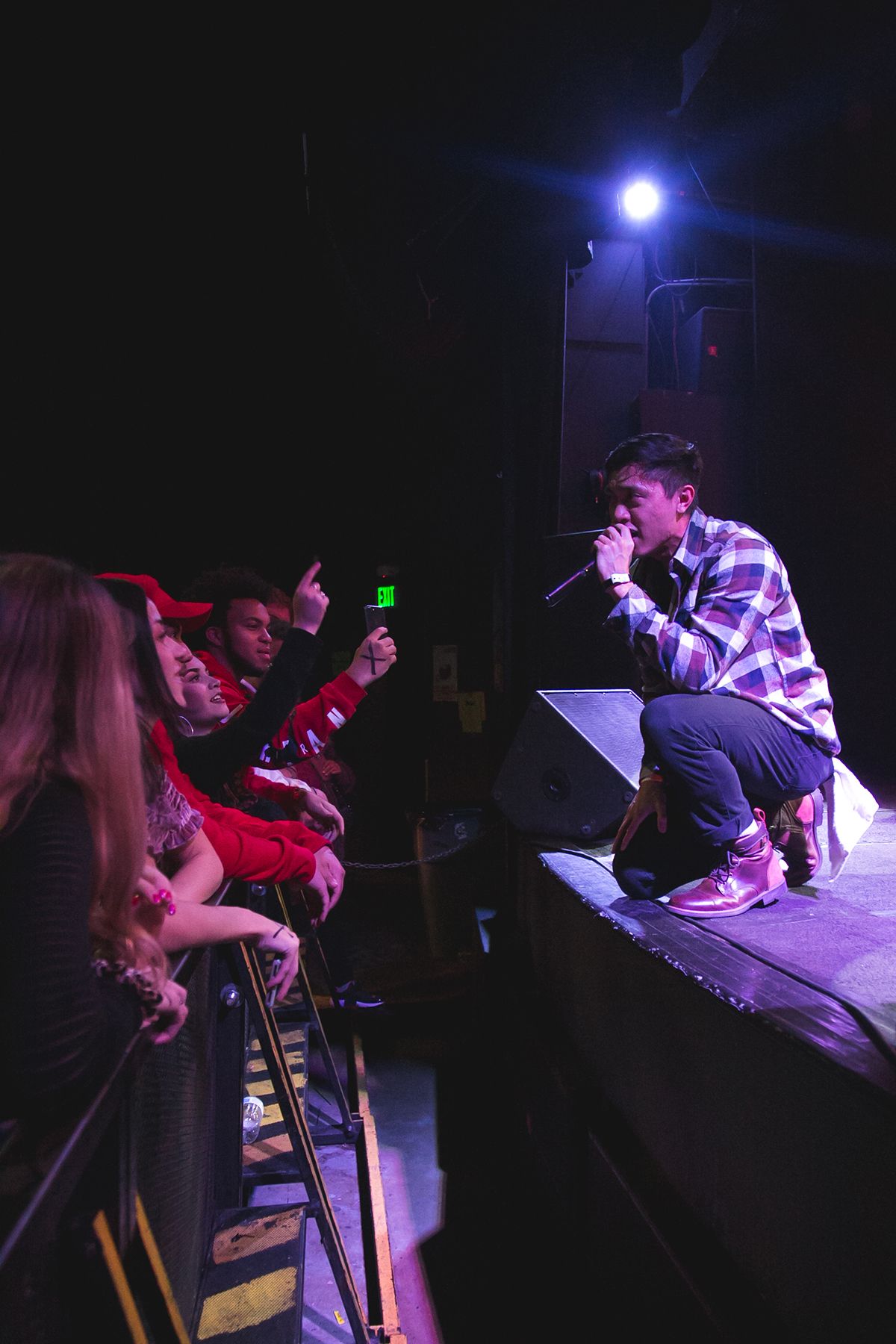 Sarmiento found his passion for writing at an early age. In sixth grade, his language arts teacher, Minda Reglos, said he wrote beautifully and told him that if he kept working hard, he could be “somebody” one day.

Throughout high school, Sarmiento began to take his writing more seriously. He was introduced to the art of spoken word and found several mentors early in his studies who helped him see his potential for stage performance.

As Sarmiento began competing and performing on international stages, he gained confidence in his talent and creativity, and his passion for writing and performance grew and solidified.

“I realized writing was the closest I could get to performing real magic. And the stage was the only place that scared my monsters,” he said. “There's power in moving people with words.”

From the moment he entered the University of Guam, Sarmiento knew he was going to be an English literature major, but he worried that he wouldn’t be able to grow his creative writing skills soley through literary study. That’s where Sarmiento’s English literature professors stepped in.

Each of Sarmiento’s professors played a role in his growth as a writer and performer, challenging him to explore his voice and identity and refine and control his use of language. Sarmiento recalls Professor Christopher Schreiner, in particular, who always gave students the freedom to write creatively in place of a standard essay.

“My time at UOG sharpened my thinking skills, refined my ability to challenge the world I was stepping into,” he said. “Dr. [Robert] Underwood once said, ‘We’re here to prepare you to approach the world from a position of strength.’ And that's essentially what my professors did for me.”

His dedicated hours of reading, studying, and writing about literature culminated with a bachelor’s degree in English in 2012, which he then followed with a master’s degree in teaching in 2015.

“The papers helped me become a mature thinker,” he said.

Sarmiento motivates and influences not only on stage, but in the classroom. He is an instructor of adult basic education for Community Educational Outreach in Colorado, a nonprofit dedicated to providing educational resources for adults who are at risk of being institutionalized, undergoing drug rehabilitation, or in community correction. He also previously taught creative writing for the Guam Department of Education and facilitated workshops for the Sinangan-ta Youth Movement in Guam.

Giving back to community and the next generation

Sarmiento remains connected to the University of Guam, this year establishing the Minda Reglos Writing Prize for University of Guam undergraduates in honor of his middle-school teacher. He awarded prizes to three students in May.

He also wrote and performed the poetic voiceover in the University’s "Rise Above" commercial, released in April 2019.

Sarmiento encourages UOG students to seek constructive criticism from their role models and to identify and hone their own strengths and weaknesses. “Never give up. No matter how hard — or even how good — life gets, you have to remain in practice of your craft,” he said.

Moving forward, Sarmiento hopes to continue growing a following for his work, performing for new audiences, and building relationships that will foster his creative and professional goals. Ultimately, he hopes to utilize his notoriety to help level the playing field for underserved and disadvantaged communities.

“I am thankful that more and more people are discovering me and supporting my pursuits. I can’t do this alone and the more people support me, the further I’ll go,” he said.