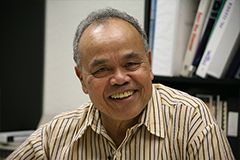 The 17th installment of the Richard Flores Taitano Micronesian Area Research Center (MARC) Seminar Series will feature Gerald San Agustin Perez on the topic “What price? The myth of independence.” The lecture, which is open to the public and free of charge, will begin promptly at 6:30 p.m. on Tuesday, Dec. 10, at the College of Liberal Arts & Social Sciences Lecture Hall on the University of Guam campus.

Perez has a long professional career spanning work with the natural sciences, economic development, and business disciplines as well as academia. He presently serves as an adjunct professor at the University of Guam School of Business & Public Administration.

He is president of Micromed Suppliers, a family-owned company that has served Guam and Micronesia for 30 years. Until his retirement in 2002, after 23 years with the company, he was also president of DFS Guam, the largest luxury travel retail employer on island and the catalyst in developing "Pleasure Island," Tumon Bay's shopping, entertainment, and lodging zone. Perez also served as the Guam Economic Development Authority administrator and then the general manager of the Guam Visitors Bureau.

He was twice chairman of the Guam Chamber of Commerce Board and twice chairman of its Armed Forces Committee. He currently co-chairs the Andersen Civilian Advisory Council with the 36th Wing Commander. His major contributions to military relations, tourism, and economic development earned him a place in the chamber's coveted Business Hall of Fame in 2017.

Perez was born during the Japanese occupation, graduated from Father Duenas, and went on to earn a bachelor’s degree in forestry and a master's degree in wildlife management. In retirement, he went on to earn an interdisciplinary doctorate in tourism economic development and public policy at the University of Alaska Fairbanks.

About the MARC Seminar Series

The MARC Seminar Series began in the 1970s as a way to promote the Micronesian Studies Program and encourage interest in the people, culture, history, and language in this region.

It continues to be held on the second or third Tuesday of every month. The lectures are prerecorded by Rlene “Live” Productions and aired later on the Guam Legislature channels: GTA 21 and Docomo 117, KUAM Channels: Docomo TV1 and GTA GNN CH17.

MARC is considered a world-class research facility for social sciences and humanities studies of the people of the Marianas and Micronesia. Visit MARC’s research library today and begin your Micronesian Studies exploration.