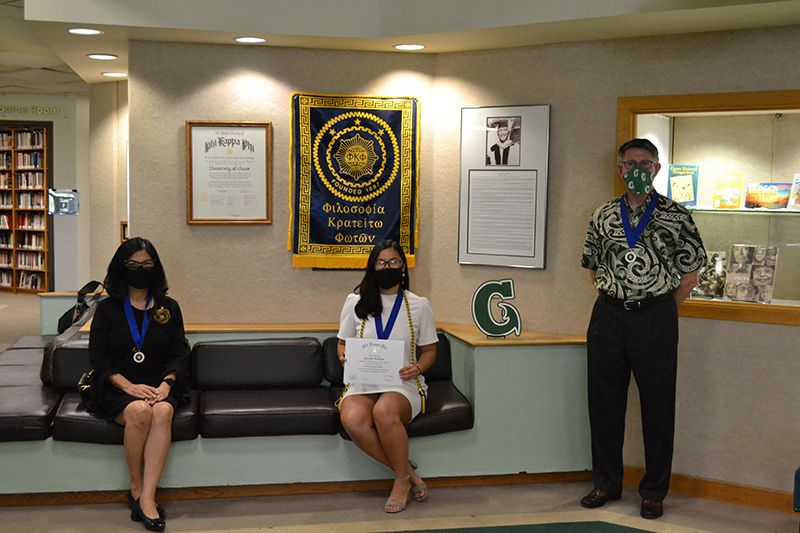 Jestyne Sablan, a senior health sciences major with a concentration in pre-physical therapy, was installed as the inaugural student vice president of the University of Guam’s chapter of Phi Kappa Phi. She is seated, center, with Senior Vice President and Provost Anita Borja Enriquez and UOG President Thomas W. Krise, right.

Sixty-four top-performing students at the University of Guam became the first student members inducted into the UOG chapter of The Honor Society of Phi Kappa Phi on June 15. Phi Kappa Phi is the nation’s oldest and most selective all-discipline honor society.

The induction ceremony was partially virtual, with a welcome video from existing chapter members, while the rites of affirmation were conducted in-person in the RFK Memorial Library.

“I couldn’t be more proud of them for starting this chapter, even in such uncertain times,” Senior Vice President and Provost Anita Enriquez said in the welcome video.

The University of Guam chapter was officially installed on March 11 after a thorough petitioning process, site visit, and approval from the society’s board of directors. At the ceremony, 23 faculty, staff, and administrators were inducted as members, including UOG Vice Provost Troy McVey as president.

During the ceremony, Jestyne Sablan was installed as the chapter’s inaugural student vice president. Sablan is a senior health sciences major with a concentration in pre-physical therapy. She was selected from a competitive application process.

“I am honored to help lead such a prestigious and highly selective society,” Sablan said, adding that she wants the first initiates to leave their mark at the University of Guam.

Phi Kappa Phi seeks to recognize and promote academic excellence in all fields of higher education and to engage the community of scholars in service to others.

The student inductees are as follows: