While lecturing onstage about the functions of the different regions in the brain, Professor Kyle Smith suddenly yells “BANG!” causing the crowded auditorium full of smartphones to reveal the faces of curious students.

Many students came to know Smith for his jokes and stunts during lectures, but there was always a lesson behind the humor. The purpose of yelling “BANG” wasn’t to wake up sleeping students. It was a way of illustrating how the midbrain amplifies unexpected sounds.

“Being effective as an instructor requires a lot of hard work, and occasional ‘spoonful-of-sugar’ stand-up can never substitute for preparing carefully. So I always tried to have plenty of solid, organized content in my presentations,” Smith said. “But I’d also learned that I often had to compete with close to a hundred smartphones, so I’d do my best to be entertaining as well as informative.”

Now retired from 30 years as a professor of introductory level psychology courses and a master’s psychology research course, Smith has undoubtedly left a memorable — though sometimes startling — impression on his students and will be remembered at the University of Guam as an inspirational ambassador for his field.

Instilling the joy of discovery 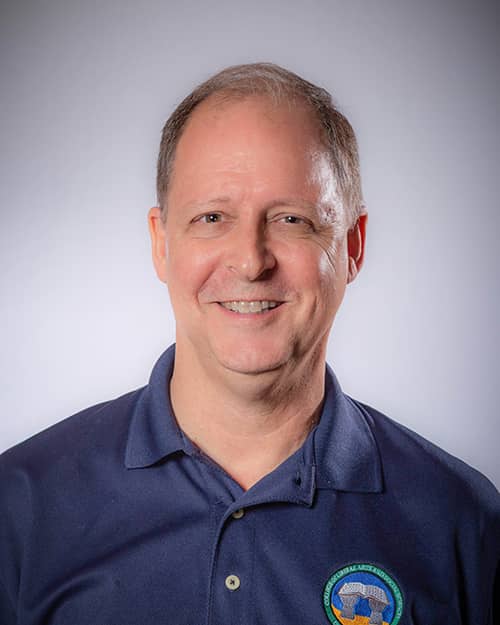 After receiving his doctorate from the University of Washington and working abroad for several years, Smith joined the Triton community in 1991 and was promoted to full professor in 1999. Smith wanted every one of his courses to be something that his students found useful in their lives and careers. More so, he hoped his courses offered new perspectives.

“What I hope people I worked with in my courses will remember is that discovery is thrilling and that their own lives — and those of the people around them — are endlessly fascinating, if considered in a thoughtful way,” he said.

He was known among his colleagues for being thoughtful and committed in his role as an educator.

“For me, Kyle is the epitome of a professional scholar,” said Kate Moots, interim associate dean of the College of Natural and Applied Sciences. “He knows his subject matter intimately and has a passion for teaching and drawing others into the field.”

In fact, he was the only faculty member teaching Psychology 101 during his tenure, and his course produced a steady increase of declared psychology majors, according to Dean James Sellmann of the College of Liberal Arts and Social Sciences. One student even declared psychology as her major after her first day of class.

“I will never forget the first day of my Introduction to Psychology class,” said alumna Vanalyn Quichocho. “I wasn't expecting too much because it was a large lecture hall class, yet Dr. Smith's teaching style and the content blew me away. He presented the content so masterfully, and it was apparent that he loved the field. I was so intrigued that by the end of that first day, I declared psychology as a major.”

Quichocho went on to earn both her bachelor’s and master’s in psychology at the University of Guam and is now enrolled in a doctoral program at Illinois Institute of Psychology with aspirations of becoming a licensed clinical therapist and teaching psychology at the collegiate level herself.

The motivation is mutual

Smith said his students were, in turn, a motivating force for him.

“When someone in one of my courses had an 'Aha!' moment, discovering or understanding something that had been opaque to her or him before, it was wonderful and motivating,” he said. “I actually had a dance I’ve been known to do after the lightbulbs go on over multiple heads. […] When they’re listening, thinking, asking questions, and looking forward to the next class — it’s fantastic.”

He said he is also grateful for the times when students shared things in class that got everyone, including him, thinking in new ways.

“It’s often said that you really learn something when you have to teach it, and part of that is because your students teach you as well,” he said.

Faculty of the Year

The year before he retired, he was named the Faculty of the Year in the university-wide Triton Awards, nominated by his dean.

“I think Dr. Smith was most known for his can-do attitude and his friendly, collegial character,” Sellmann said.

Even outside the classroom, Smith was committed to the University, serving numerous terms on the Faculty Senate, including as vice president and as a committee chair, in addition to co-chairing a writing team for the University’s accreditation report.

“Dr. Smith constantly exhibited quality leadership … In the most trying and challenging of situations, Dr. Smith maintained composure, and he saw projects through to completion,” Sellmann said.

Now retired, Smith plans to devote his time to another passion of his — writing.

“I’ll always miss teaching and doing research, but I’m excited to move into writing fiction full-time,” Smith said. “Writing provides a rich way of looking at the stories that manifest in other people’s lives and in one’s own. People are endlessly fascinating.”

Could authoring books become a second career for Smith?

“That depends on whether people enjoy reading what I write,” he said. “I can’t wait to find out.”