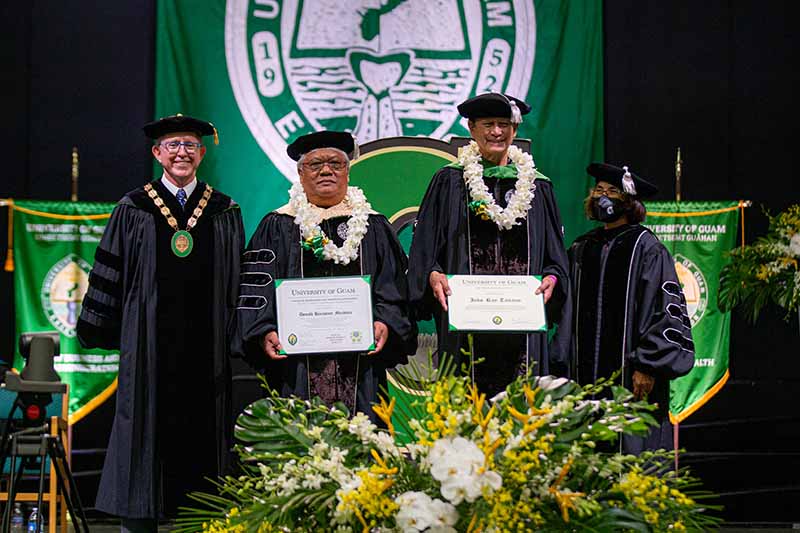 During the Fañomnåkan 2022 Commencement Ceremony on May 22, 2022, the UOG Board of Regents recognized its three newest honorary degree recipients: Donald Mendiola, Dr. John Ray Taitano, and Dr. Patrick Tellei.

Honorary degrees have been one of the highest honors conferred by universities dating back to the 15th century. They are a means of recognizing experts and distinguished individuals whose personal or professional endeavors complement the University’s role and have made long-lasting contributions to society.

Mr. Donald Mendiola is a recognized indigenous expert who has made significant contributions to the community in traditional practices. He has practiced as a yo’åmte (or traditional healer), master weaver, and fa’fa’nague (or teacher) of CHamoru language for more than 49 years assisting more than 20,000 people throughout the Pacific and the continental United States.

Mendiola has been an educator in the CNMI Public School System for more than 33 years. He teaches cultural studies at Hopwood Middle School in Saipan and is the only teacher in the school system teaching traditional healing and weaving.

With his mastery of the CHamoru language, he has been called upon to translate and interpret for various agencies and organizations. He also takes care to perpetuate his knowledge, providing workshops for his fellow educators and having published a book in 2009 of herbs and shrubs in the CNMI that can be used for medical remedies.

Dr. Taitano built a successful military career over 26 years — serving in the Vietnam War and in Operation Iraqi Freedom as a Medical Corps Officer and earning numerous military awards.

Seeing the need for medical professionals in Guam, he returned home and has been serving the people here as an internal medicine specialist for 42 years.

In 1985, Dr. Taitano co-founded The Doctors' Clinic in Tamuning, one of Guam's longest running private clinics.

He is also active in Guam’s medical community at large — having served as president of the Guam Medical Society and the Guam Board of Medical Examiners, to name a few.

Dr. Patrick Ubal Tellei, president of Palau Community College, is the longest  serving chief executive of any higher education institution in the Pacific region. Having orchestrated agreements with other universities and colleges among other efforts, he has arguably made more educational opportunities available for the people of Palau and the wider region of Micronesia than any other individual. His work consistently enhances academic excellence and progress in Palau.

Dr. Tellei has served as an ambassador for Pacific Island-based  institutions in regional, national, and international forums and as an advocate and adviser to leaders, always emphasizing the importance of education in addressing the critical challenges of our time.

Dr. Tellei earned his Doctor of Education from the University of San Diego in 2005, with his dissertation focused on workforce development in Palau.

Throughout his career, he has been a supporter of the practice and transmission of island wisdom and traditions within educational settings and beyond.