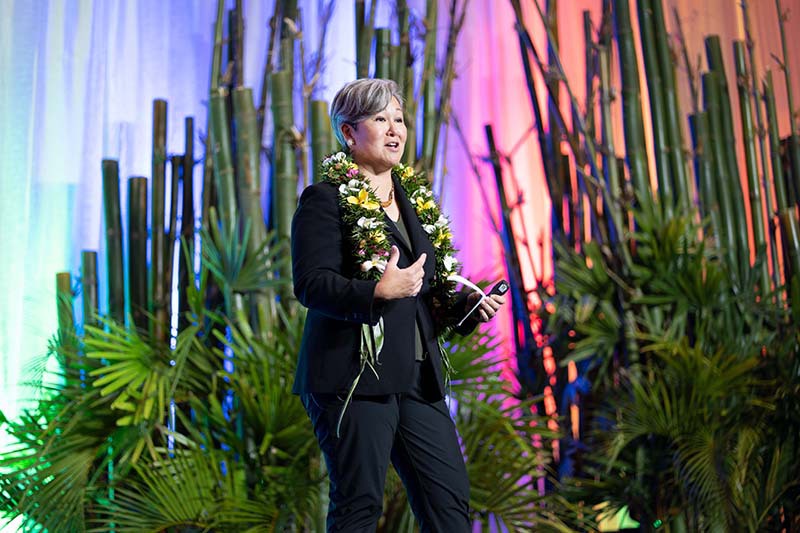 Keynote speaker Suzanne Vares-Lum, the new president of the East-West Center in Hawaii as of January, shares what her father told her after surveying various Micronesian islands with the Army in 1962: “We have a lot to learn from those who live there … there’s no such thing as an orphan, there’s no such thing as someone who’s homeless … there was no such thing in 1962. There wasn’t an idea that you wouldn’t share everything you had with someone else.” 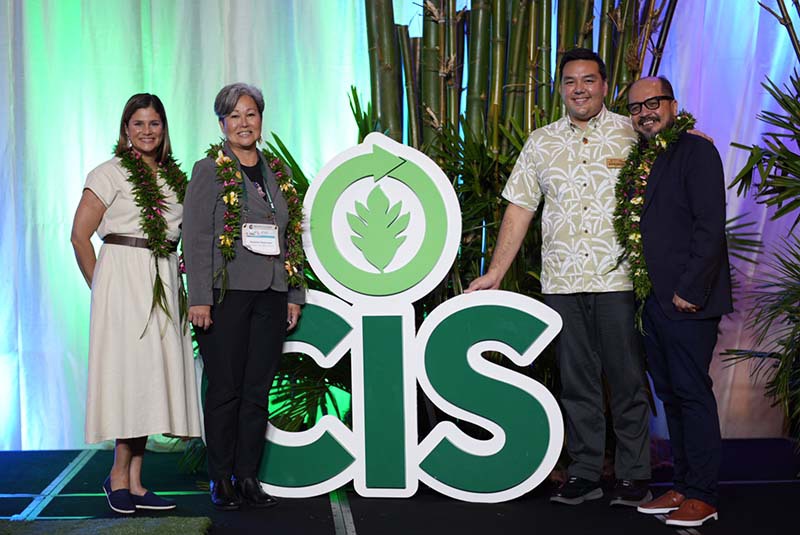 The University hosted the conference around the theme “Harness Wind in Our Sails to Sustainable 2030” from April 5 to 9, 2022. The theme is anchored on the United Nations’ global effort called the Decade of Action, which seeks to improve life for all people and the health of the planet from 2020 to 2030 by working toward 17 Sustainable Development Goals.

As the keynote speaker for the conference, Suzanne Vares-Lum, the president of the East-West Center — an education and research organization based in Hawaii meant to promote cultural understanding between people and nations — emphasized these themes in her speech. Among the key priorities of the center is to develop “a space to enable in-depth discussion to develop impactful solutions across the region.”

Vares-Lum is the first native Hawaiian woman to hold her position. She is a long-time advocate of Indo-Pacific issues, leadership and mentorship, women, peace, and security. As a retired major general with 34 years of service, Vares-Lum has held key roles in addressing priority national security challenges in the region.

Sessions throughout the conference featured sustainability experts, researchers, and civic leaders from the Pacific region presenting on sustainable development topics from food security and climate change to youth empowerment and economic development.

The week-long international conference took place in a hybrid format — both in person at the Hyatt Regency Guam and also via livestream. The conference drew around 400 virtual and onsite participants from more than 60 countries, states, and territories, representing universities, government agencies, nonprofit organizations, and private businesses worldwide. 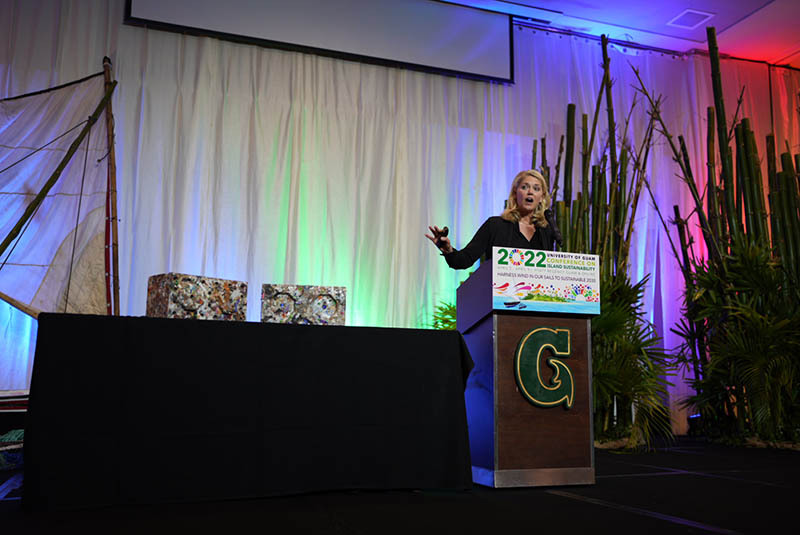 Featured speaker Heidi Kujawa presented a patented system of her California-based company that converts plastics #1 through #7 into a construction-grade building material called ByBlock using steam and compression-based technology. The system shreds plastic waste, then superheats and fuses the material into ByBlock units without sorting, prewashing, or any extra additives. ByFusion has worked with communities on construction projects, including an athletics pavilion in Kauai and a lifeguard tower in California. 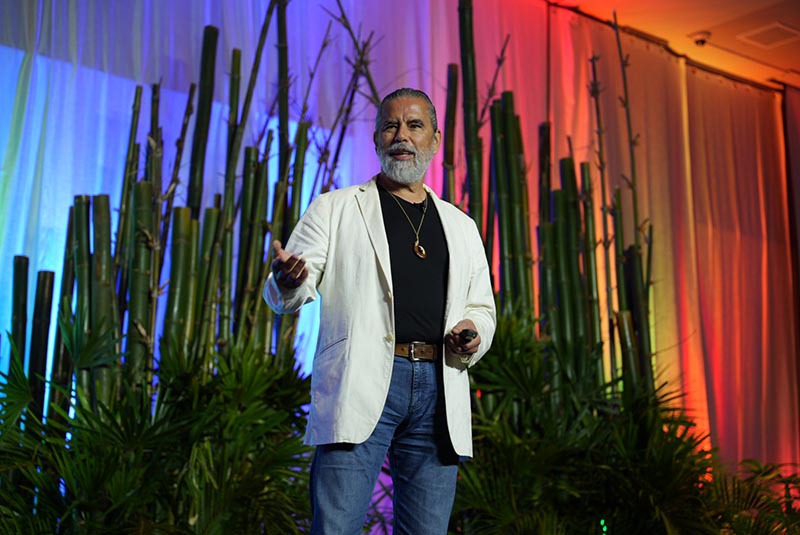 Henk Rogers, founder of Blue Planet Alliance and a clean energy visionary who has dedicated a decade of his career to exploring, developing, advocating for, and implementing renewable energy sources, encouraged the Conference on Island Sustainability audience to take a “bottom-down” approach to global change toward a sustainable future and not only rely on people at the top. He shared his experience in working toward Hawaii’s 100 percent renewable energy mandate by 2045. He also shared the alliance’s plans with Palau and other island nations in creating pathways to achieving the same renewable energy goals. 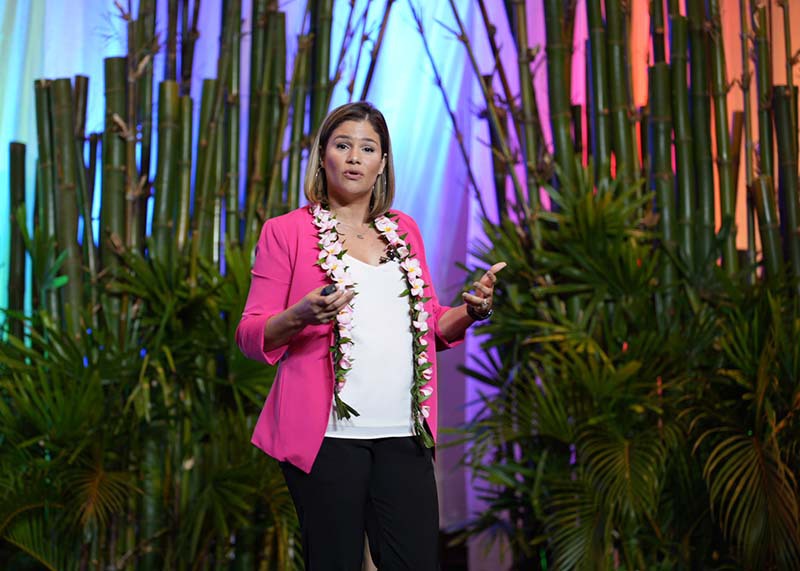 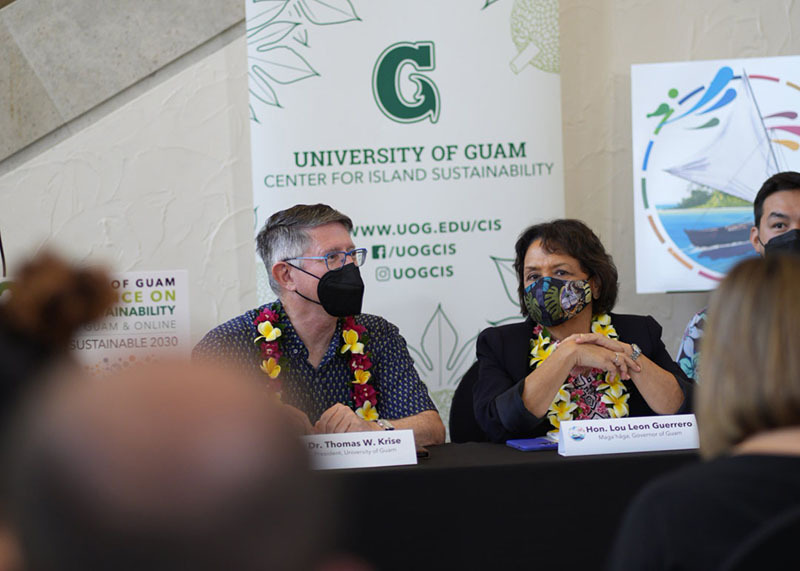 The conference co-chairs shared their perspective on the theme. Krise said University has made great strides toward the path to sustainability with its work in island wisdom and in firming up its role as the collaborative research institution in Micronesia. Meanwhile, the governor said the pandemic showed the importance of moving forward toward economic diversity.

Chirayath developed remote sensing technology to equip satellites and aerial drones to map coral reefs and marine environments. He visited Guam several years ago to map Guam’s priority coral reefs. At the virtual meeting, he shared new results from the datasets and talked about some next-generation sensing technologies. 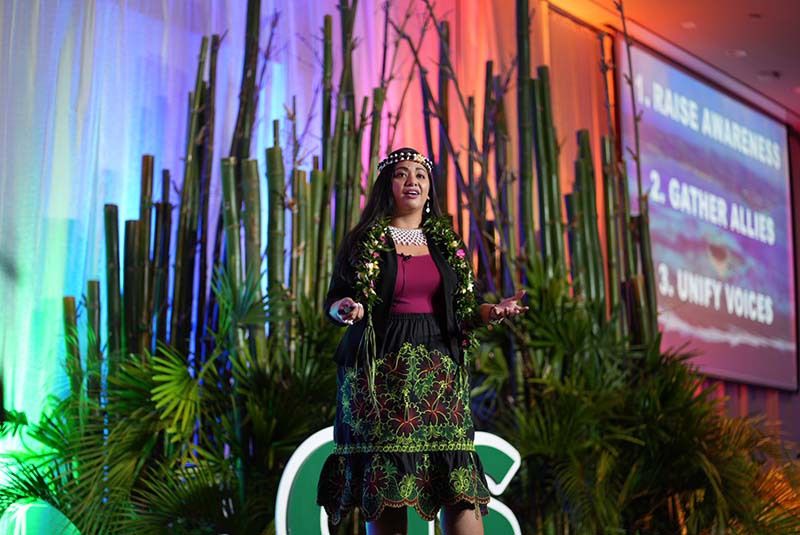 Saipan’s Sheila Babauta encouraged the audience to build solidarity with each other throughout the Mariana Islands as a featured CIS Seed Talks speaker of the 2022 University of Guam Conference on Island Sustainability on April 8 at the Hyatt Regency Guam. Babauta is an environmental justice movement fellow with The New School (N.Y.) and is a representative in the 22nd Northern Marianas Commonwealth Legislature. 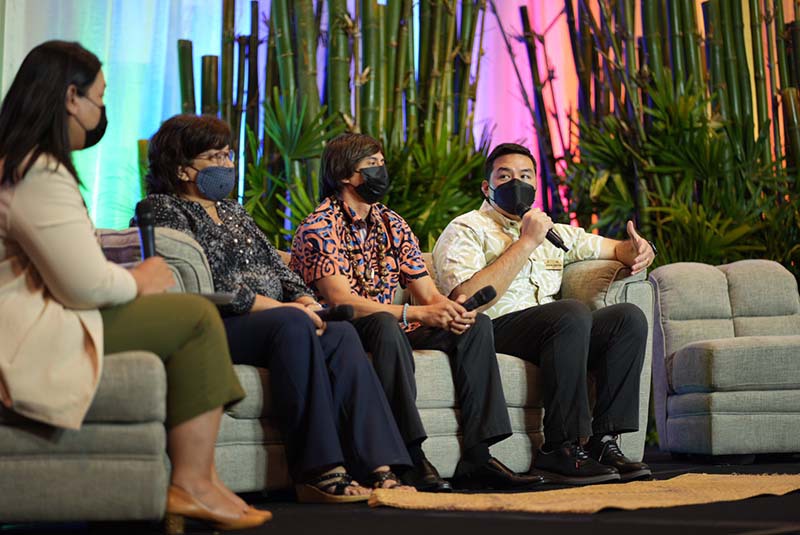 Austin Shelton, director of the Center for Island Sustainability, speaks on a panel about harnessing opportunities for Guam from the Bipartisan Infrastructure Law, also known as the Infrastructure Investment and Jobs Act, at the 2022 University of Guam Conference on Island Sustainability on April 8 at the Hyatt Regency Guam. (From left) Moderator Melanie Mendiola, CEO and administration, Guam Economic Development Authority; Carlotta Leon Guerrero, chief adviser on military and regional affairs to the governor of Guam; John Miller, president, Mana Pacific Inc. (Hawaii); and Shelton. 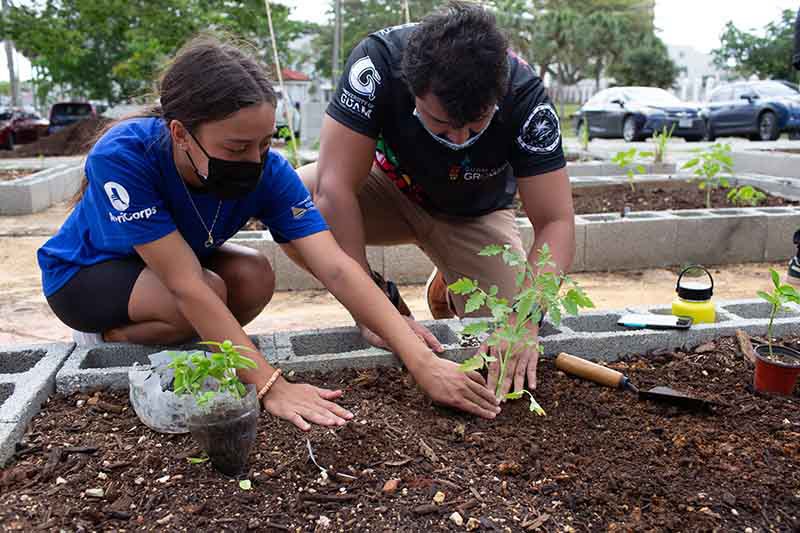 Tatiana Ananich, an AmeriCorps volunteer with Guåhan Sustainable Culture and a communication studies major at the University of Guam, teaches Jordan Panuelo, business education coordinator of the Guam Green Growth initiative, tips on planting seedlings at the G3 Community Garden in Hagåtña. The garden, which is managed by Guåhan Sustainable Culture, was one of the site visits on the Conference on Island Sustainability tour on April 6. 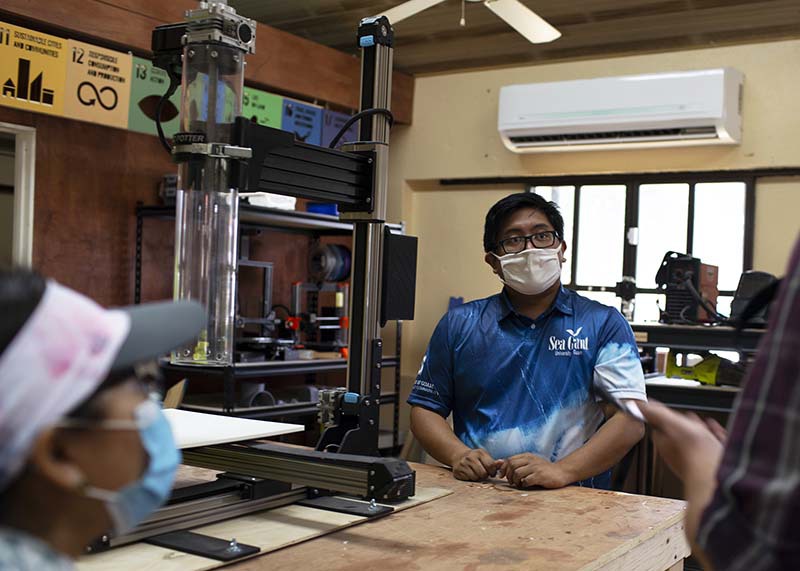 Aaron Ferrer, an attendant of the G3 Circular Economy Makerspace and Innovation Hub, teaches a tour group about the 3D printers and other machinery available at the Makerspace for members to use. The Makerspace, opened this year as a place for community members and entrepreneurs to upcycle materials on island to make products in an effort to decrease waste going to the landfill and decrease imported goods, was one of the site visits on the Conference on Island Sustainability tour on April 6. 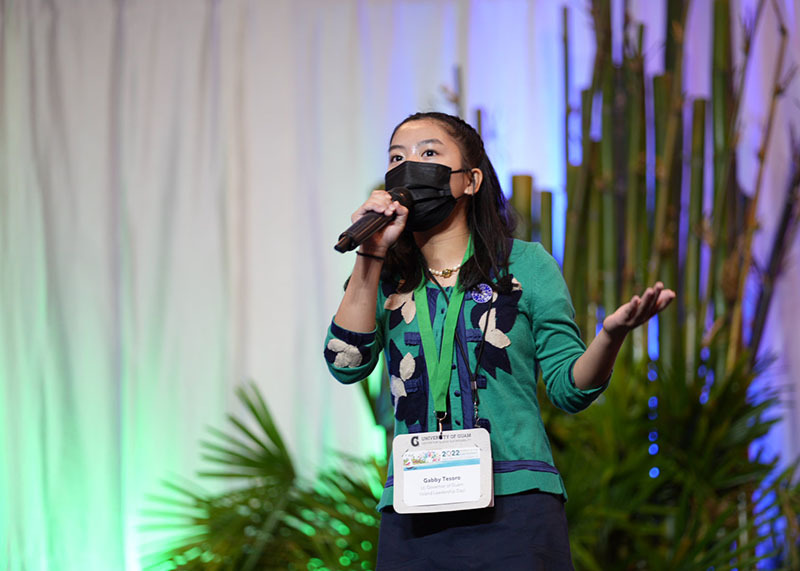 Tesoro delivered her award-winning speech from the Department of Youth Affairs Oratorical Conference as a follow-up to Guam Lt. Gov. Joshua Tenorio’s speech at the 2022 University of Guam Conference on Island Sustainability on April 7 at the Hyatt Regency Guam.