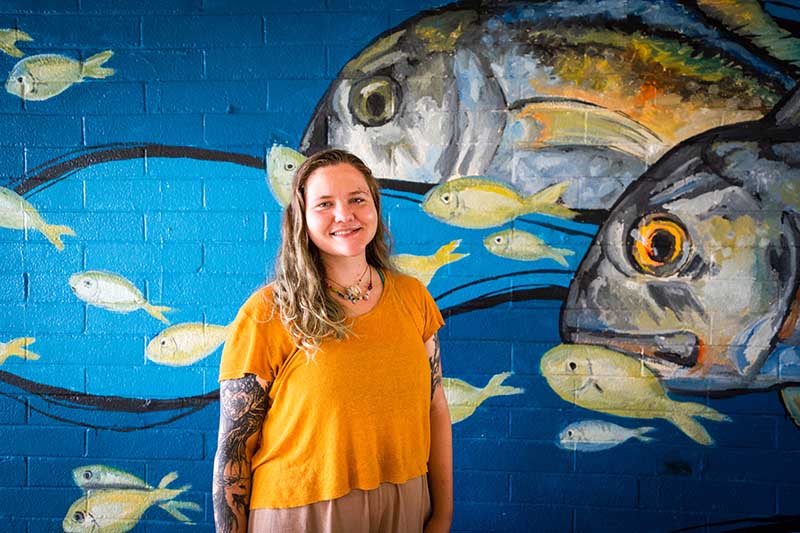 Mariya Musya, a visiting graduate student from the Czech Republic, by a mural at the University of Guam Marine Lab.

Mariya Musya is a graduate student studying nature conservation at Czech University of Life Sciences Prague (CZU). With a particular interest in oceans and corals, she found a connection through one of her professors to the University of Guam and subsequently chose to focus her master’s thesis on the concentration of microplastics in Guam’s waters.

“No one has ever measured the concentration of microplastic in surface water on Guam, so Dr. [Atsushi] Fujimura [at UOG] shared my curiosity in this matter, and we worked on conceiving the study together,” she said.

While there is no student exchange or internship agreement between CZU and UOG, Dean Lee S. Yudin of the UOG College of Natural and Applied Sciences had bridged a connection with Peter Kumble, an associate professor at CZU, when he visited CZU several years ago.

“We visited three different universities, and Czech University of Life Sciences Prague was the one I chose because of its ties in STEM fields,” Yudin said. “I hoped that this bridge would open up gateways for their students to work in ocean environments, as Mariya was able to accomplish.”

The 25-year-old, who grew up in the Siberian region of Russia and holds a bachelor’s in applied ecology, worked closely this past summer in Guam's tropical waters with Fujimura, an associate professor of oceanography at the UOG Marine Lab, collecting samples and information for her research.

The first is sampling surface water along the coasts of Guam and filtering the samples to identify meso- and microplastic debris for plastic characterization and identification to be done in the Czech Republic. The second part examines Acropora azurea and Pocillopora damicornis, two common coral species found around Guam, for any potentially ingested microplastics.

“Microplastic contamination, so far, is not the main stress factor for corals in general, but it will be good to figure out how critical this factor is here on Guam,” Musya said.

The inspiration for her research focus came from a similar study done in Hawaii, which showed Musya how fast island ecosystems might face the consequences of anthropological issues like marine debris.

While Musya previously believed that inspiration for research in her field could only be found by looking to build upon what had already been done, her time at the University of Guam has changed her perception.

“At the Marine Lab, there are many people formulating new questions directly related to the island and its surroundings,” she said. “They are highly motivated to find answers to new scientific questions in order to bring a solid base knowledge for the next researchers.”

Musya said her role as project lead and experiencing the dynamic of a different research lab from the labs back home was a good personal challenge that will greatly benefit her future in nature conservation.

“Most of our students end up in the mainland U.S. and in some Asian countries. This bridge was into Europe. Having Mariya living here and interacting with our own graduate students was to have her also take about the great possibilities CZU could offer our students,” he said.

Musya plans to return to Guam to continue working on the project, and she hopes to have final results from her study by April or May. Follow her progress on her Instagram @mintsea_maru.