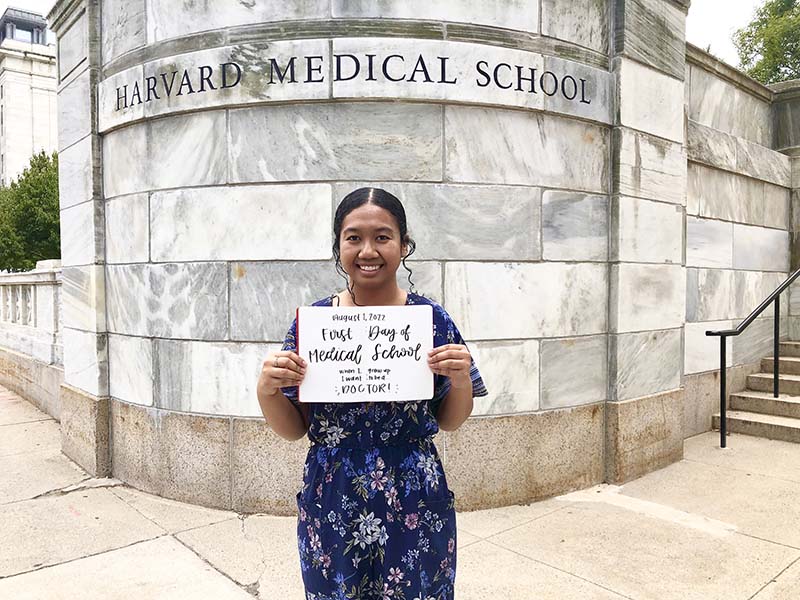 Megan Gimmen commemorates her first day of medical school with a photo on the Harvard Medical School campus. The Merit Scholar and '20 UOG valedictorian from Guam began a four-year Doctor of Medicine program on Aug. 1, 2022. Photo courtesy of Megan Gimmen

Megan Gimmen wears her lab coat on the Harvard Medical School campus, where she began a four-year Doctor of Medicine on Aug. 1, 2022. Photo courtesy of Megan Gimmen
❮
❯

Two years after graduating from the University of Guam as the Class of 2020 valedictorian with a B.S. in biology and chemistry, Megan Gimmen had an important decision — which medical school to attend in the fall.

Gimmen, a first-generation college graduate, received acceptance letters from a total of 12 medical schools — four of which were Ivy League schools: Harvard University, Yale University, the University of Pennsylvania, and Cornell University. She was also offered full scholarships from several on the list, but Gimmen said with a smile that she was the most excited about Harvard.

Starting this month, Gimmen will leave the two island communities she calls home — Guam and Yap, where her parents are from — to spend the next four years working toward a Doctor of Medicine at Harvard Medical School.

Her acceptance into the school's Pathways program came with a full scholarship to cover the cost of tuition and a partial stipend for living expenses. Gimmen said she chose Harvard largely due to its supportive and friendly campus community. Moreover, she was inspired by the research, work, and attitudes of the faculty and students.

“I really like the people I met there. […] I thought it was very powerful to feel encouraged and motivated just speaking with the students,” she said. “Their mindset there is you don’t have to wait until later, you can try to make change now.”

Driven to take care of her community

Gimmen’s interest in going to medical school began when she was in high school. With members of her family having to move off-island for medical treatment, she witnessed the stress and financial strain of navigating the health care system.

“There are a lot of disparities in our health care system in Guam, and we just don’t have a lot of the resources,” she said. “In other islands surrounding us, they have even less resources. That’s what kind of made me think, ‘Hey, somebody should do something about this.’”

And rather than letting challenges hold her back, Gimmen said she used them as motivation.

“My parents are from Yap, and they moved to Guam. We didn’t grow up with a lot of financial resources and there were a lot of struggles, but I feel like it just motivated me to work hard and put my energy into some kind of mission to be able to help people,” she said.

It gave her perspective and encouraged her to work hard so she could take care of her community, she said.

Gimmen enrolled at the University of Guam in 2016 and double majored in chemistry and biology. During her time at UOG, she gained valuable research experience through several stateside programs and internships ­­— including the BUILD EXITO research program through Portland State University and two internships with the National Institutes of Health in Bethesda, Md.

After her Introduction to Sociology course at UOG and a BUILD EXITO sociology class, she began to see more real-world applications for biology and chemistry, and she added a minor in sociology.

“In the social sciences, they teach you about people and different perspectives,” she said.

A sociology internship with the Guam Memorial Hospital allowed her to apply what she learned in the classroom and gain hands-on experience working with patients.

“I would help feed patients their meals or help with their physical therapy,” she said. “At the long-term care facility, they’re there for a longer time, so you get to build more of a relationship with patients. It was a great experience, and I really enjoyed it.”

Throughout her time as a Triton, Gimmen said she had a strong support system of peer and faculty mentors who believed in her and wanted to see her succeed.

“I really liked my time at UOG — I think the biggest thing was community. I was close to a lot of the people I was going to school with, and I was able to have a relationship with a lot of my professors,” she said. “I always felt a great community at UOG, and people were super supportive.”

She credits mentors from her Guam and Yap communities — especially Professor of Chemistry Tedros Bezabeh, School of Health Dean Margaret Hattori-Uchima, and Assistant Professor of Biology Michael Orr — for providing guidance, support, and encouragement throughout her undergraduate journey. Bezabeh said her achievement is an inspiration for all students in Guam.

“Because of her, many now believe getting into Ivy League medical schools is not out of reach,” he said.

Her professors witnessed her drive and ambition in their classes and are not surprised to see where her hard work has taken her.

“I was always amazed by her work in my lab,” Orr said. “[…] Megan has continued to work hard to achieve amazing successes and continues to be one of UOG’s champions.”

Gimmen advises aspiring medical students in Guam to seek out and take advantage of the many pre-medical fellowships, research positions, pipeline programs, and gap-year programs that are available. She also advises students to find a mentor.

“Mentorship is integral for navigating higher education and medicine,” she said. “Look for mentors who want the best for you and value you both as a student and a person.”

After graduating from UOG in 2020, Gimmen began a two-year Doctoral Diversity Program at Johns Hopkins University (Md.), where she gained more experience in neuroscience research.

"The program is for people thinking about going into a Ph.D. or M.D. program. It allowed me to gain more experience, network, and receive mentorship while planning my next steps and applying for medical schools,” she said.

Now, having started at Harvard on Aug. 1, Gimmen said she’s keeping her options open regarding a specialty. But one thing is for sure: She is on a mission to create positive change in health care for future generations.

“I hope that whatever it is, I’m able to make it about ways to improve the health care system to make it more equitable for Pacific Islanders and other populations that experience serious health disparities,” she said. “Our community deserves so much.”