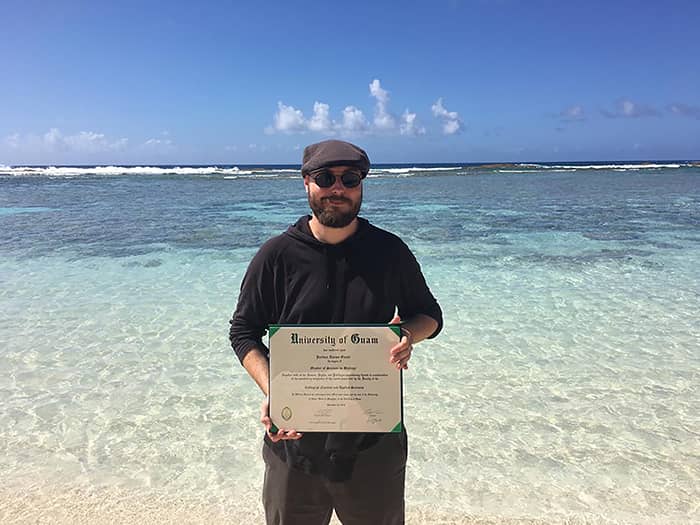 UOG biology alumnus Jordan Gault authored the research report “Lineage-specific variation in the evolutionary stability of coral photosymbiosis,” which was published in September 2021 in the journal Science Advances. 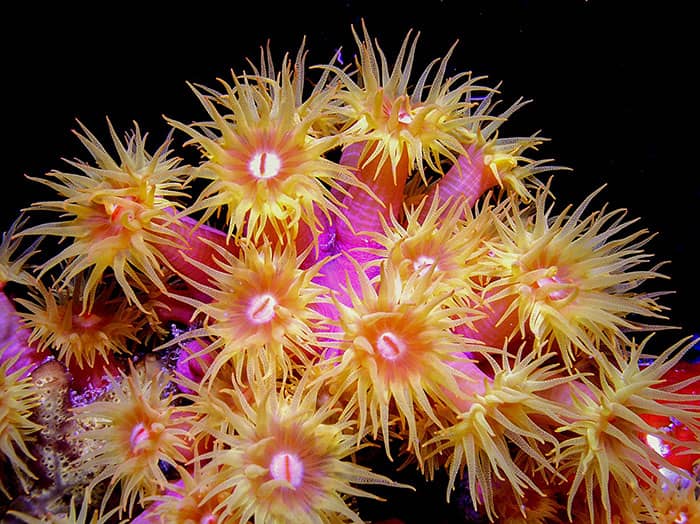 A Scleractinian coral in Apra Harbor, Guam, photographed by David Burdick, collections manager of the GECCO Biorepository under the Guam NSF EPSCoR grant at the University of Guam.
❮
❯

University of Guam researchers have traced an evolutionary trait of reef-building corals in order to calculate which lineages, among hundreds, are most likely to retain the reef-building trait. The trait is a symbiotic relationship with algae that accelerates calcification of coral skeletons, encouraging the growth of expansive reefs in shallow tropical and subtropical waters.

The study, which was funded by the university’s National Science Foundation EPSCoR grant, was published in September in Science Advances, a peer-reviewed journal of the American Association for the Advancement of Science.

Coral reefs shelter one-quarter to one-third of all marine species, the report states, and stony corals — marine animals of the order Scleractinia — are what creates this habitat. The corals receive nutrients from the photosymbiotic algae living in their tissues, which then supports the calcification of coral skeletons. Photosymbiosis is a type of symbiotic relationship between two organisms in which one organism is capable of photosynthesis.

However, half of the order’s members are non-photosymbiotic and tend to be small, not colonial, and are found in deep waters.

“The origin of the order has been shrouded in mystery,” said lead author Jordan Gault, a UOG alumnus who wrote the paper for his master’s thesis. “When Scleractinian corals first appeared in the fossil record, they were already highly diversified. There’s evidence that some of them were photosymbiotic, but where did they all come from? If they’re diversified already, there’s evolutionary history that goes further back that you cannot see in the fossil record yet. That’s one thing we’ve set out to understand with this study.”

“There are certain groups where the association seems to be almost irreversibly stable. Those two partners are bound to each other for the whole group, and they thrive and die together, while others may be more flexible,” said UOG Associate Professor Bastian Bentlage, the co-author of this study. “There may be some lineages — if they’re not as tightly integrated with the photosymbionts — that may be less susceptible to a breakdown of these relationships. That’s really interesting in terms of understanding the dynamics of what we see on our reefs in a changing climate.”

At first, the project faced delays because the initial simulation studies took a long time to run on the computational resources that were available at the time. To address these issues, the research team used the Open Science Grid, a network of computers spread nationally that allows open access to high throughput computing for research in the United States.

“Facilitating this study meant relying on this grid that was able to run hundreds of thousands of individual simulations,” Bentlage said. “That wouldn’t have been possible with a desktop computer. Having access to this high-speed computing grid was very essential to finishing it.”

As part of the Guam NSF EPSCoR’s strategic plan, the program is working on establishing a computation hub at the University of Guam.

'Quite a feat for one's first scientific publication'

Prior to pursuing a doctorate at the University of Oldenburg in Germany, Gault spent eight years at the UOG Marine Laboratory pursuing his thesis research and working for the Long-Term Coral Reef Monitoring Program.

Gault is the first UOG student to have his work published in Science Advances journal, which in 2019 surpassed Science magazine in the number of monthly submissions, becoming the largest member in the Science family of journals.

“It’s quite a feat for one's first scientific publication,” said Professor of Marine Biology Alexander M. Kerr, who conceived the research project and served as Gault’s main adviser. “Jordan’s a careful and deep thinker, always going the extra step to make sure that he understands the sometimes difficult and new concepts and techniques needed for his research.”

Gault said that getting the paper published feels like closing a chapter in his life.

“It’s nice and a little bittersweet. I’m proud of the work that we did, and I’m happy to have it out there. […] The best outcome is if it somehow shapes some research down the road. If people address our results and ask questions further down the line, I think that would be excellent,” Gault said.