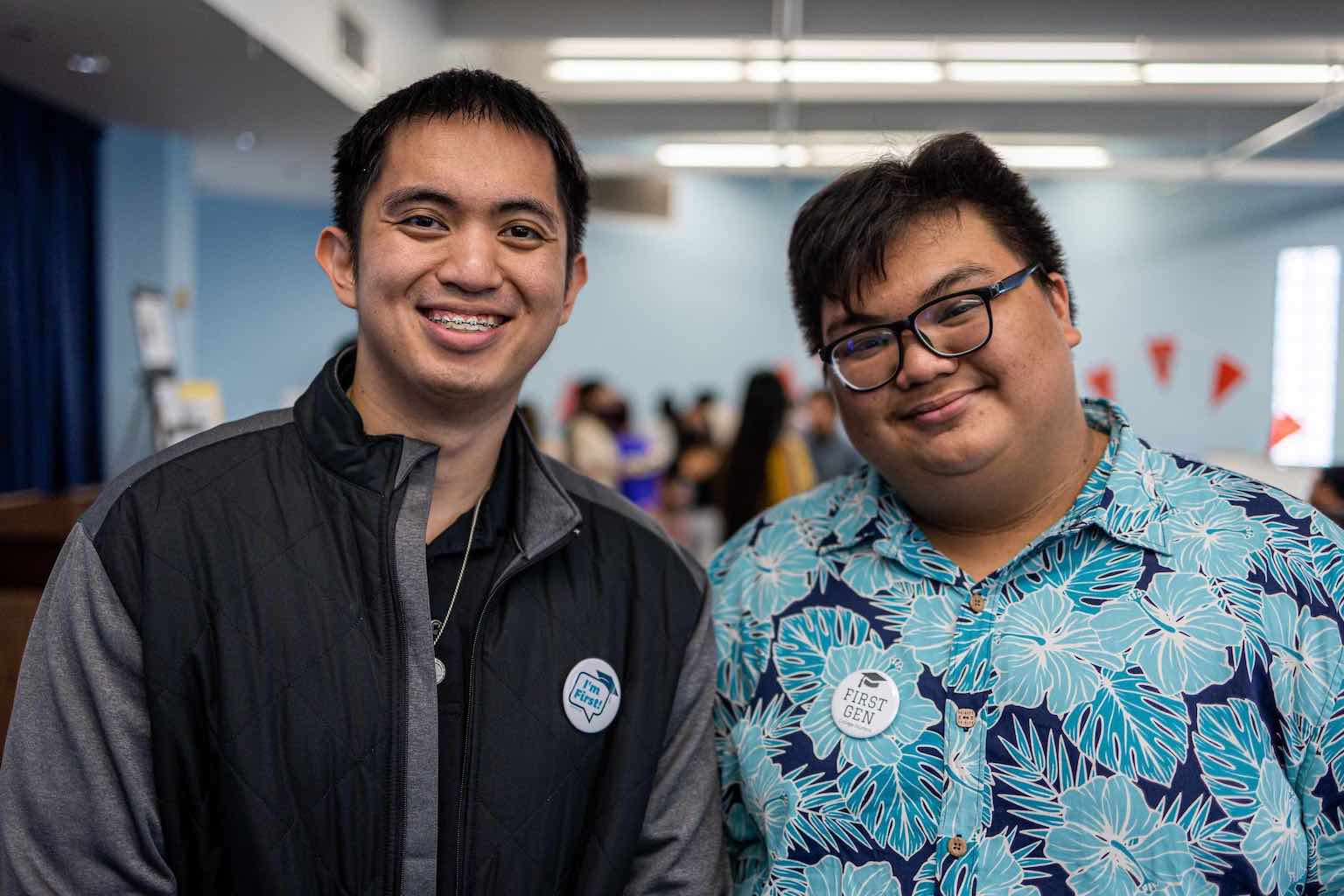 A student life coordinator, Evander De Guzman, left; and Christian Gyles Ramos, a business major at the School of Business and Public Administration at the University of Guam; are first-generation college students in their family. 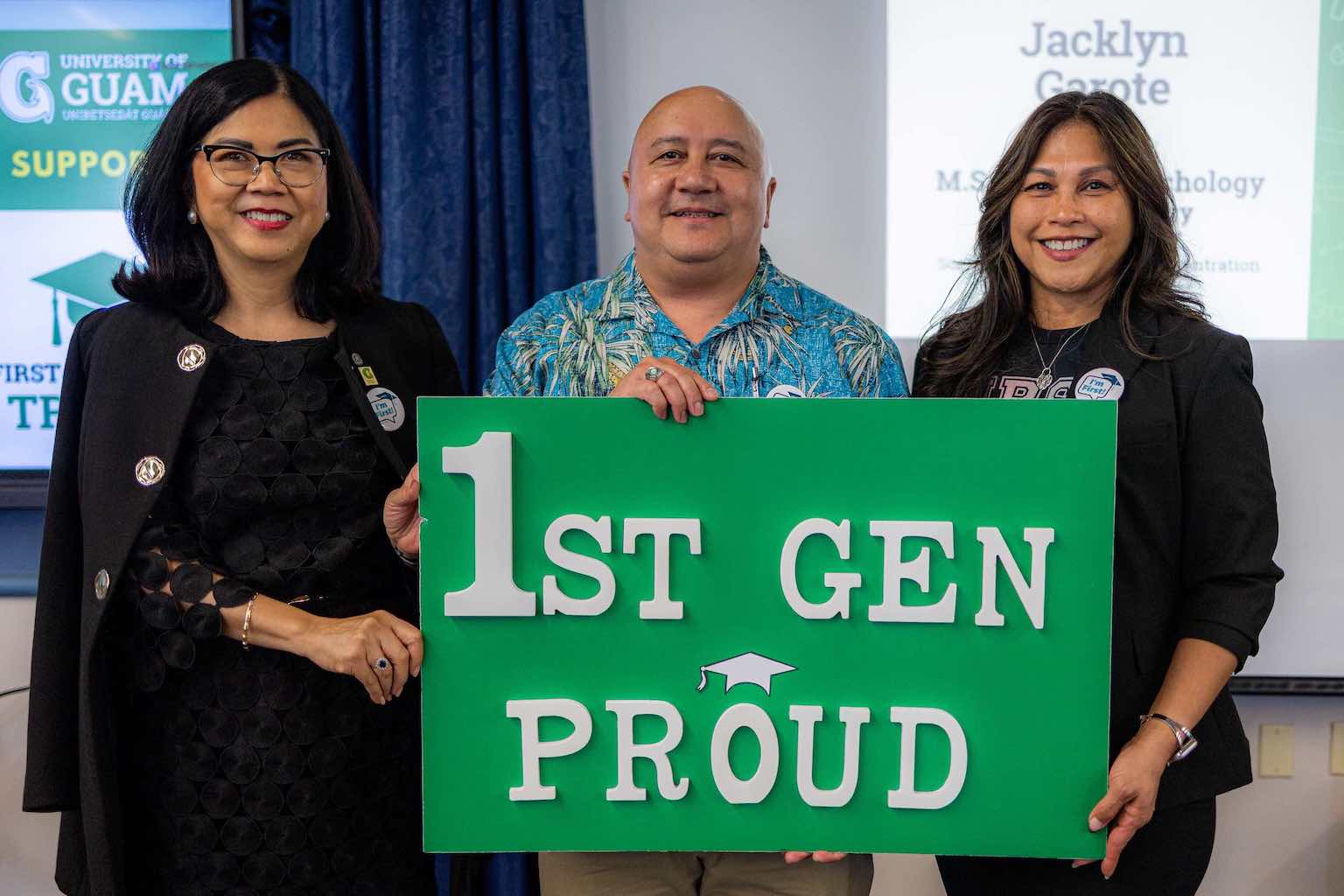 Lawrence Camacho of Enrollment Management and Student Success, center; and retired Dean Annette Santos of the School of Business and Public Administration share their experiences as the first in their immediate family to complete a four-year college degree. 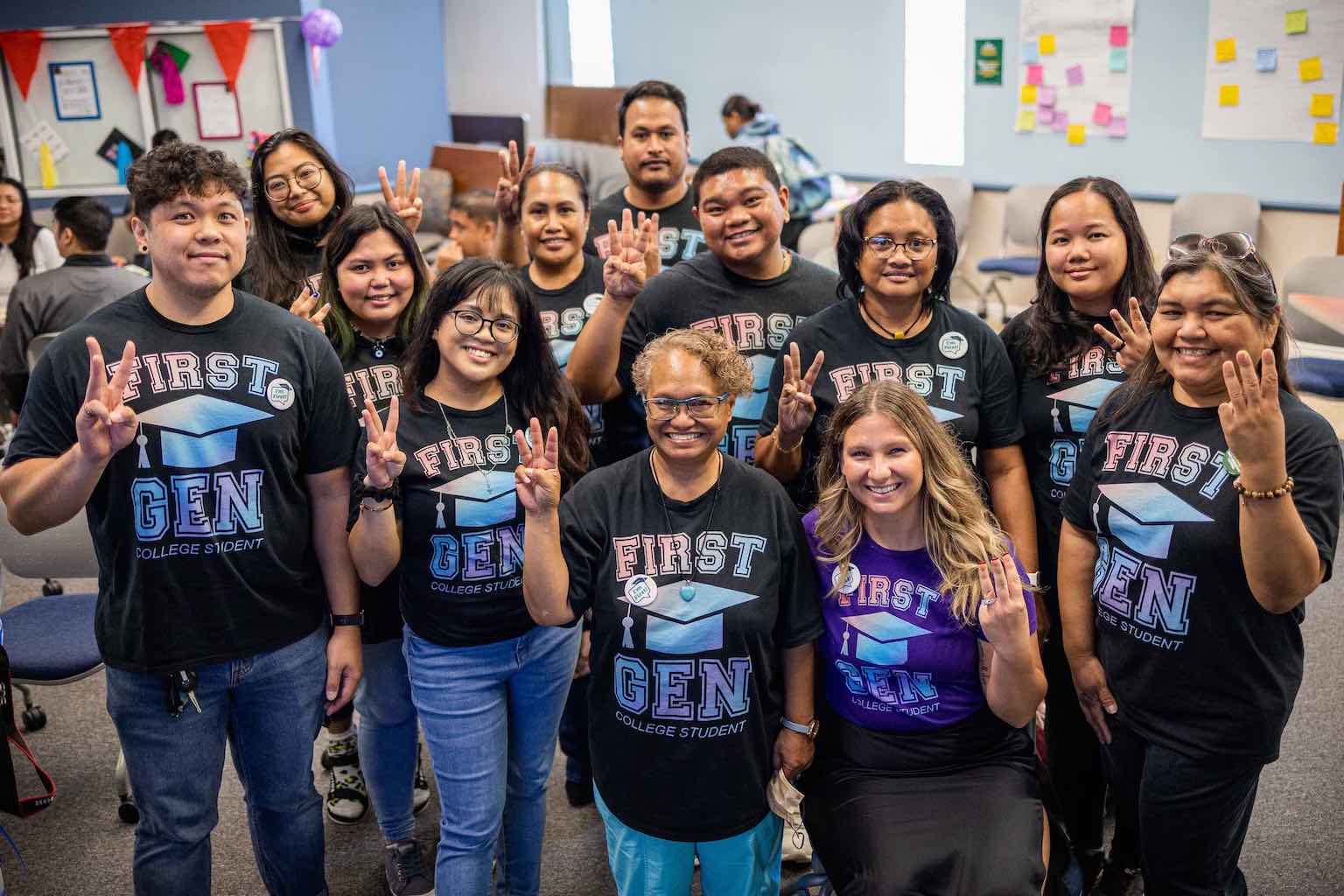 The University of Guam celebrates its first-generation college students November 21. Nearly one in three UOG students self-reported being the first in their immediate family to attend a four-year college, also called “first-generation" or "first gen” students.
❮
❯

Christian Gyles Ramos grew up being raised by parents who held multiple jobs to support a household of 12.

With the struggles of his family, just dreaming about being the first from his household to get a four-year college degree seemed unrealistic.

But Ramos worked on his dream.

He’s majoring in business at the School of Business and Public Administration at the University of Guam, and just a year shy of breaking new ground for his family as a future college grad.

“I thought going to college was impossible,” Ramos said.

Nearly one in three UOG students self-reported they are the first in their immediate family to attend a four-year college, often referred to as “first-generation” students or “first gen.”

Over the years, up to 35% of UOG’s undergraduate student body self-reported as being first-gen students, said Dean Lawrence Camacho, of Enrollment Management and Student Success.

Evander De Guzman is part of the statistic. His parents worked hard, but college took a back seat from their financial responsibilities as the oldest of multiple siblings.

De Guzman graduated with a health sciences degree from UOG last year, and he now works as the Student Life Coordinator at UOG. He hopes to help his mom financially, so she can soon retire from her job of 30 years at a hotel food and beverage department. His dad passed away before he entered college, and it was his parents’ wish for him to get a college education.

“They believed in higher education. As parents, they always wanted the best for our future,” De Guzman said.

On November 21, UOG hosted a celebration of first-generation students and some of the campus’ leaders shared their experiences having broken through similar barriers to education decades ago.

Senior Vice President and Provost Anita Borja Enriquez shared that her dad came from a low-income family and enlisted in the Navy.

Enriquez said her dad, a hard worker, emphasized the need for her to get a higher education.

“Achieving a university degree is a game-changer,” she said.

As for Dean Camacho, he learned the importance of a college education from his grandfather, a World War II survivor whose education was limited to sixth grade under the Imperial Japanese rule.

His grandfather, who later became a Trust Territory judge, told him to “not say anything unless you know what you’re talking about.” It was his grandfather’s way of telling him to get a college education.

Retired SBPA Dean Annette Santos shared the moment she realized it’s time for her to return to college. Expecting her third child, she read from a parenting magazine that children will have better chance of getting a degree if their parents set the example for them.

“It has been reported that in many cases, first-gen students' parents did not attend college because they did not have the financial, physical, or other opportunities,” Camacho said.

UOG has long provided numerous forms of support for students through programs such as federally funded TRIO which provides services for individuals from disadvantaged backgrounds, scholarships, federal and local financial aid and work-study opportunities. There is also a $500 assistance to first-generation high school graduates who enroll at UOG.

The goal is to raise the levels of support even higher, Camacho said.

“UOG has decided to … strategically design initiatives to promote and advance this segment of the student population,” Camacho said.

At UOG, Enriquez said, “there is an incredible system of support” for students to succeed.