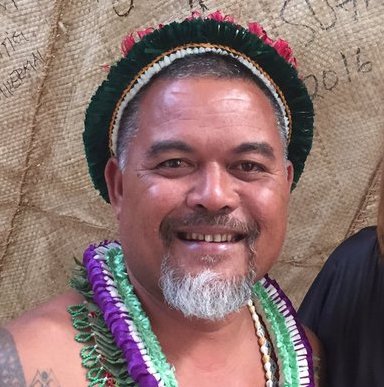 Larry Raigetal is the co-founder and president of Waa’gey, a nonprofit organization in Yap State that works with communities to promote cultural heritage of the Reimethau, or people of the central Caroline Islands. Raigetal is an accomplished master canoe carver and weriyeng pwo navigator and he shares his expertise as a volunteer instructor.

He served as the Federated States of Micronesia’s deputy assistant secretary of foreign affairs and represented his country to numerous international and regional negotiations, including the first United Nations conference on Agenda 21 and the Sustainable Development of Small Island Developing States in Barbados. He moved to Yap and assumed a cabinet post as director of the department of youth and civic affairs. In partnership with the Center for Island Sustainability and the University of Guam Sea Grant program, he also served as an instructor at the university, teaching Traditional Seafaring and Climate Change courses. 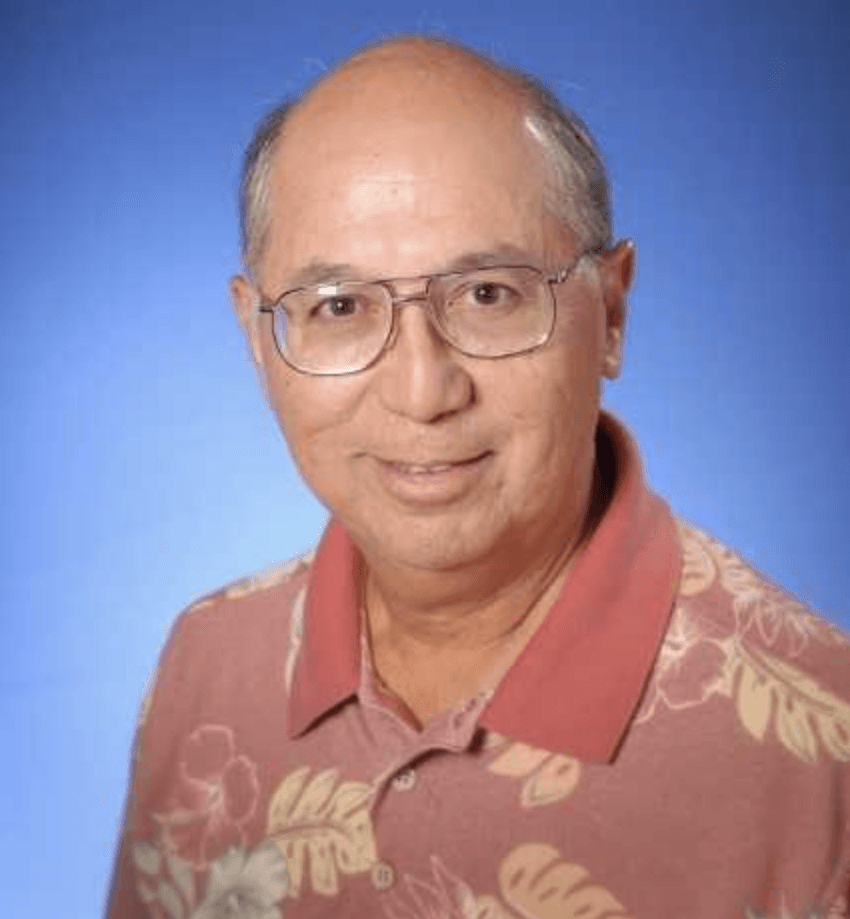 Joseph T. “Joey” Duenas is the Board Chairman of the Guam Consolidated Commission on Utilities, which oversees the Guam Power Authority and the Guam Waterworks Authority.

Duenas has more than 25 years of experience as a business professional, serving in both public and private sector capacities. Prior to his role at CCU, he served as President of Guam Housing Corporation, President of Duenas Inc./J.D. Investments Inc., Director of the Guam Department of Revenue and Taxation and Finance Officer of the Archdiocese of Agana.

He received his B.A. in Business Management from Chaminade University of Honolulu and is a graduate of Father Duenas Memorial High School. 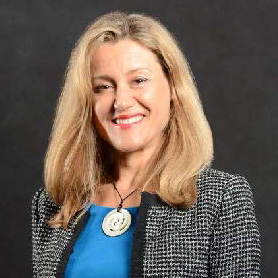 Amanda Ellis is the executive director, Hawaii and Asia-Pacific and director of Strategic Partnerships for the Julie Ann Wrigley Global Institute of Sustainability at Arizona State University. She is an adjunct senior fellow at the East West Center where, from 2016 to 2018, she served as special adviser for International Programs and Partnerships in the Office of the President on secondment from the New Zealand Foreign Ministry. Until March 2016, Ellis served as New Zealand’s head of mission and ambassador to the United Nations in Geneva and the prime minister’s special envoy to Francophone Africa. From 2010, she was deputy secretary of international development and the first woman to head the New Zealand Aid Programme, managing an annual budget of more than $600 million. Prior to this, she was lead specialist in the Poverty Reduction and Economic Management Group at the World Bank Group in Washington D.C., where she managed the World Bank President’s Global Private Sector CEO Leaders Forum and led the Doing Business gender research project, which created “Women, Business and the Law.” While at the World Bank, she worked with the Economist Intelligence Unit to create the EIU Women’s Economic Opportunity Index. Ellis also founded the International Finance Corp.’s gender program, where she developed the first lines of credit for women entrepreneurs in Africa delivered through local banks. In the late 1990s, she served in senior executive roles at Westpac Banking Corp. in Australia, including as head of Women’s Markets and national manager of Women in Business, growing a new business rapidly to more than half a billion dollars in annual revenues within three years.

Ellis is the author of two best-selling Random House books, “Women’s Business, Women’s Wealth” and “Woman 2 Woman” and lead author of five research titles in the World Bank Directions in Development series on gender and growth in Africa, the Middle East, East Asia and the Pacific. A founding member of the Global Banking Alliance for Women, Ellis is the recipient of the TIAW Lifetime Achievement Award for services to women’s economic empowerment, the East-West Center Distinguished Alumni Award and the Columba College Distinguished Alumna Award and NZ Business Hall of Fame.

Ellis serves on the advisory boards of FINCA International, the UN Women’s Empowerment Principles, Hawaii Green Growth, Bishop Museum, the East-West Center Board Of Governors and the Council on Foreign Relations Advisory Committee on economic inclusion. She is a member of NZ Global Women and an honorary member of BPW International and Rotary International. Pacific Business News named Ellis one of ten 'women to watch' in Hawaii in 2017.

Ellis holds a B.A. First Class Honors degree in French and Economics from the University of Otago, New Zealand, an M.A. degree from the University of Hawaii at Manoa, which she earned on an East-West Center scholarship and an LTCL from Trinity College of London. She has completed executive education programs at Harvard Business School and the Kennedy School of Government, the Stanford Graduate School of Business and INSEAD and the Asia Pacific Center for Security Studies Transnational Security Course for two star generals and civilian equivalent. 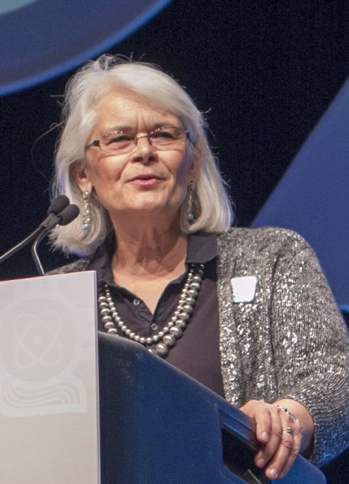 Dr. Maggie Werner-Washburne received a BA in English from Stanford. After graduation, she lived in Mexico, Central, and South America, Alaska, and Minnesota—a walkabout that led to her becoming a scientist. During this time, she became interested in ethnobotany (the traditional use of plants for food, clothing, and medicine). Maggie spent time in Western Samoa and New Zealand and completed an MS in botany at the University of Hawaii, and a PhD in botany with a minor in biochemistry at the University of Wisconsin-Madison. After a postdoc in yeast molecular genetics where she and collaborators discovered that HSP70 genes were chaperones, Maggie and her family (husband Bruce and two sons) moved to Albuquerque, New Mexico, where she is now Regents’ Professor of Biology. Her research has been to understand how yeast cells survive starvation and most recently focuses on genomic analysis of the cell-fate decision that leads to the production of quiescent and non-quiescent cells in stationary-phase cultures and working on new technology to increase the utility of GFP-fusion libraries. Her work has provided insight into aging, the cell cycle, and other significant areas of cell biology. Maggie also spent one year at NSF as a program officer for Microbial Genetics and wrote the first report on the Federal Investment in Microbial Genomics for OSTP.

Maggie has been at UNM for more than 20 years, where she has mentored students from many backgrounds, her papers have been cited more than 4500 times. She is an AAAS Fellow, 2011 Harvard Foundation Distinguished Scientist, and has received numerous awards, including two Presidential awards, for research and excellence in science, engineering, and math mentoring from both Presidents Bush. Her research has been funded by NIH, NSF, and DOE. Maggie also directs the NIH-funded UNM-Initiatives to Maximize Student Diversity (IMSD) program for student research and is a co-PI on the model organism database FlyBase (Harvard and other institutions) and VectorBase (Notre Dame and other institutions). The goal of the Model Organism Database program at UNM is to increase diversity in bioinformatics by developing a genome annotation center at UNM.

When Maggie’s UNM IMSD program was winding down after ~15years, she realized that the great success of the program had led to former students moving out of state for their education and, subsequently, their careers.  Realizing that this was an unintended consequence for successful training programs in every “brain drain” state, she and her colleagues, Nancy Hurtado-Ziola and Lupe Atencio, decided to see if they could change that dynamic. They created STEM Boomerang to facilitate sustainable connections between STEM professionals who are interested in building careers in New Mexico and representatives of New Mexican business, educational, and economic sectors. Utilizing relationships between educators, families, and professionals to identify and communicate with talented people, STEM Boomerang will increase New Mexico’s capacity for finding innovative, inclusive, and uniquely creative solutions to important problems.