After introducing herself in front of a crowd of nursing peers and professionals during the School Presidents Forum, senior Resha Juanillo was welcomed to the National Student Nurses Association convention with great applause.

“You have to say your name and where you’re from,” she explained. “So when I said University of Guam, they’re like, ‘Guam? Guam’s here?’ and then they stood up and clapped.”

Senior Gizzele Valencia said some people, so surprised to see student delegates from the small island territory, wanted to hug them on the spot.

“I guess because Guam hasn’t been represented there in the longest time, and we traveled so far,” she said.

Held at the Phoenix Convention Center in Arizona April 8 to 12, this years’ NSNA conference brought together student nurses from around the nation to discuss innovations in nursing, foster professional development in the field, and encourage networking among nursing professionals.

Juanillo said upon arrival, neither she nor Valencia expected this experience. Both thought they would just feel out the conference and take notes.

Instead, they were able to see firsthand how NSNA meetings were run executively and voted to adopt or reject various health and wellness resolutions drafted by other student delegates.

“They are so proactive in advancing healthcare in the U.S.,” Juanillo said. “Guam had a voice in voting for those and voting for the next executive board for the NSNA.”

Valencia said one of the biggest advantages of attending the conference was the NCLEX mini review, which gave the attendees studying tips for the test.

Everything they learned, they plan to share with their fellow SNAG members at the University of Guam.

“We didn’t know they do all those things,” Valencia said. “We want to bring this to Guam too.”

What the seniors also realized was how fortunate they were to have studied nursing at the University of Guam. Valencia and Juanillo said it wasn’t just the rigor of the program or the thoughtful faculty that attracted them to the major at UOG.

“With the clinical settings, we’re able to practice more skills than students in the states,” Juanillo said, because of the kindness and flexibility of the patients.

“They are more willing to help the students,” Valencia said. “You have to ask for consent first (before attending to them), and most of the time they agree.”

Given the diversity of clinical settings in Guam, both seniors were able to hone their skills in the branches of nursing they love the most.

For Valencia, it is medical and surgical, which refers to more general nursing practice. Juanillo discovered her interest in breastfeeding during her time with the labor and delivery unit, an interest that she hopes will lead into a future as a lactation consultant.

The graduating seniors said being a part of SNAG and attending the conference has and will continue to help them personally and professionally.

“It has helped me a lot, especially in this leadership position,” Juanillo said. “I found out a lot of more qualities about myself. I’m not just going be a nurse. I want to be more than that too, and having the leadership qualities now will help me in the future.” 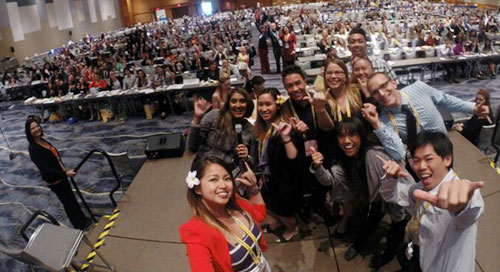 Juanillo and Valencia with student nurse delegates from Hawaii, NSNA President Kelly Hunt, and all delegates showing the "Hang Loose/Shaka" sign during House of Delegates break.