It was at the summit of Pasar Agung, the tallest mountain in Bali, that junior sociology major Brandon Cobb expressed his overwhelming gratitude.

“I just started crying,” he said. “I said, ‘I can’t say thank you enough for everything you guys have done.’”

Born with cerebral palsy, Cobb thought taking the Community Development course under the University of Guam’s Sociology Department, which includes a travel component to Ubud, Bali in Indonesia, was something he could only dream of. But after several meetings with Dr. Kirk Johnson, professor of sociology at UOG, the university’s lawyers and informing Cobb’s concerned parents, everything fell into place.

“He’s a great student—motivated, great attitude—so why not?” said Johnson. “As a teacher of this university, it is my job to find ways to provide him opportunities like every one else.”

And with that, the 2015 Bali Field School left last semester to explore the extensiveness of community development abroad.

The Bali Field School was started in 1999 by Dr. Rebecca Stephenson, one of the University of Guam’s retired anthropology professors, as part of a study of the macaque monkeys at the famous monkey forest in Ubud, Johnson said. The study ended a few years later, but he and Stephsenson in 2004 created a trip to take anthropology and sociology students to Ubud during spring break.

“She recognized the value of our students to travel outside of Guam,” Johnson said. “Bali was an interesting place. And our time in Bali is spent reflecting on the questions we come up with in the classroom. What ends up happening is not necessarily learning about Balinese society. It’s reflecting more deeply on themselves and their own community.”

As part of the Community Development course, students are embedded in Balinese culture and society. In between visiting multiple temples, they biked around northern Bali for 18 miles, visited a textile facility called Threads of Life, attended traditional dance performances, and met community development practitioners.

“An important element of the Bali Field School is having other scholars and practitioners participate allowing the students to learn from them,” said Johnson. “We have both Balinese academics, cultural artisans and so many others as well as international scholars and community organizers participate in various ways.”

For some of the students, it was their first time off-island, which, at first, was a nerve-racking experience.

“I was really scared,” said junior sociology major Francine Fujihira. “I’ve never been on a plane, but I thought it would be an interesting experience for me to go with an entire class and spend 10 days with every one of them living together and experiencing an entire new culture.”

The Balinese culture, being so inviting, allowed the students to feel comfortable right away, said Rosario Perez, a sophomore majoring in both social work and Chamorro studies.

“I had immediately felt at home,” she said. Everything felt so close to me.” 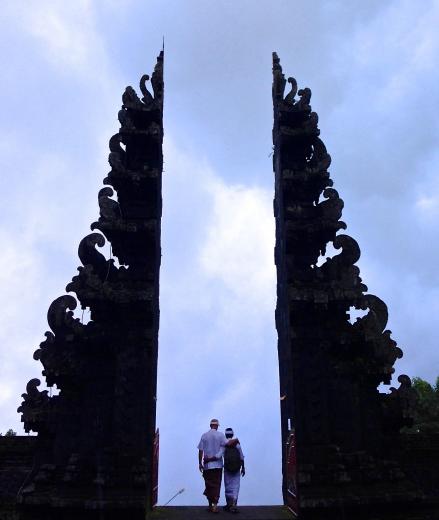 Dr. Kirk Johnson walks with a guide at the top of Pasar Agung, the tallest mountain in Bali.

The students and staff stayed at the Mawar Homestay, which is family-owned housing with adjacent rooms for guests. There, a family cooks meals for you and can arrange trips and excursions.

Johnson said it was the first time the Bali Field School trip aligned with the Balinese New Year Nyepi, which is celebrated with a day of silence. But some students, so excited to learn Balinese culture, had a hard time adjusting.

“You’re not supposed to do anything,” said Perez. “But the two children that lived there were outside dancing. I was so fascinated by it that I eventually became part of this dance. After, I went to the mother and said I’m sorry we were making so much noise. She said that it’s ok and that it was a wonderful experience.”

It wasn’t just the Balinese that became close friends with the students. Among themselves they formed a unique familial bond that’s followed them home.

“When we visited Pasar Agung, my roommate Lorenzo carried me up,” Cobb said. “I’m on his back, and I feel his legs are about to give out. But he was like, ‘I got you.’ If my brother was there, he would have carried me. My friend Lorenzo became my brother, and he carried me around.”

Junior sociology major Nathan Topasna said one of the biggest differences between Guam and Bali was the level of industrialization and Westernization. He said that Bali seemed to be comprised of everything Guam once was and should become again.

“As far as differences, obviously it’s a different culture, different land,” he said. “The level of industrial development is the difference. As far as the more rural areas, a lot of places are still underdeveloped. Although they are underdeveloped, the people are still content and happy with their lives, and I think that’s something we can take from that.”

The students quickly realized the similarities between Guam and Bali, in particular between the Chamorro and Balinese peoples, outnumbered the differences.

“The people look the same,” Perez said. “We look like we’re looking in a mirror. The language for the most part is the same. I speak fluent Chamorro. Chalan means road on Guam. In their language, jalan also means road. How crazy is it that it sounds the same?”

Fujihira said she’s thankful the University of Guam offers all types of courses, not just the ones that incorporate a travel element, taught by professors from around the world because they help broaden students’ understanding of others.

“I think it’s awesome that the university has such a diverse group of professors,” she said. “It opens a lot of our minds up to perspectives from all across the world.”

Johnson said this annual trip to Bali means the world to him. With all of the struggles and successes, he said each trip is unique because he gets to see everything through the eyes of his students.

“What motivates me is the students’ appreciation of the experience,” he said. “This is an opportunity that is extremely valuable and outweighs every other consideration. What we’ve been able to experience because of this small little effort has been tremendous.” 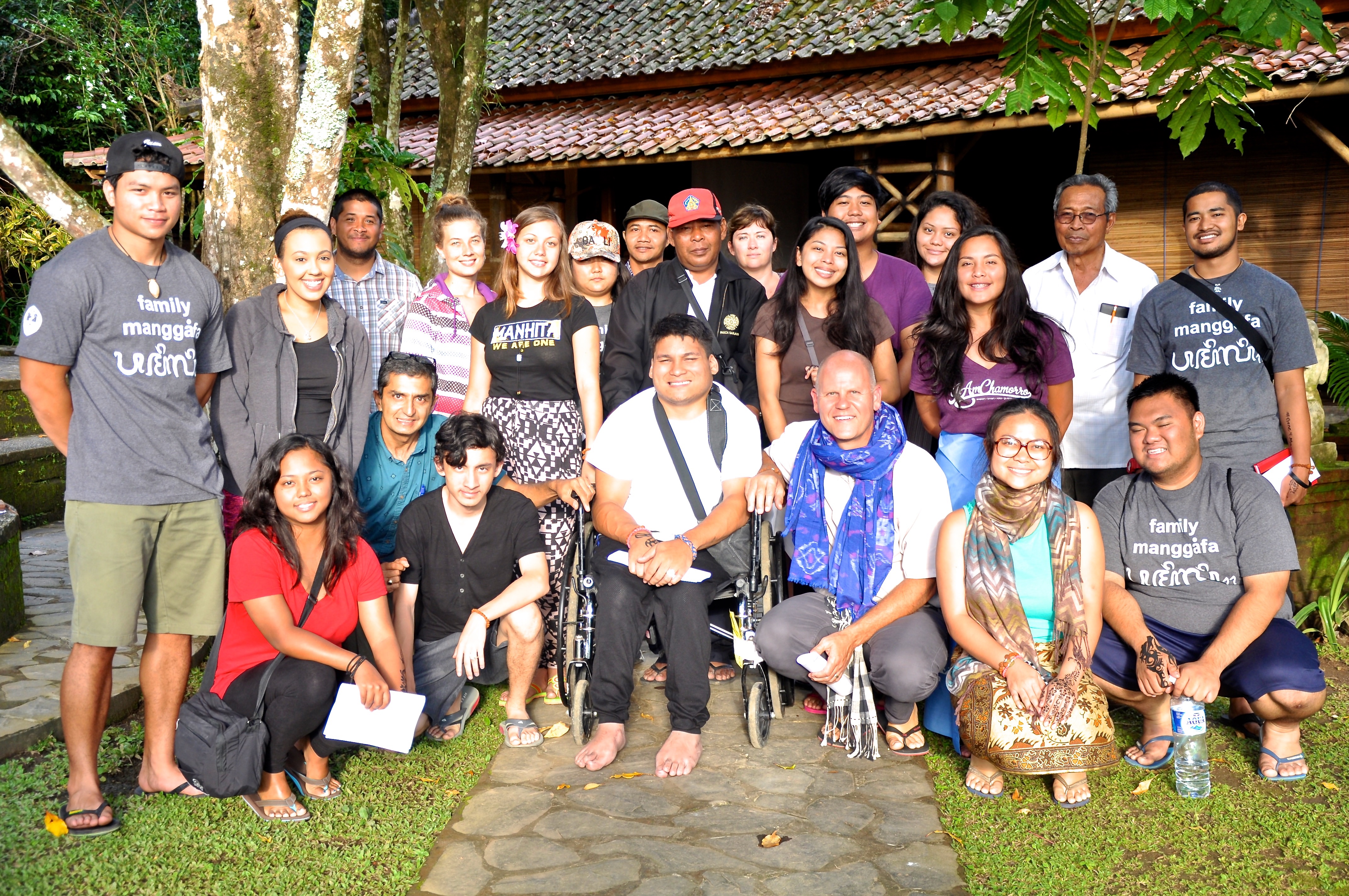 UOG students, Dr. Kirk Johnson, a visiting scholar and aids pose for a photo in Bali.