Sitting at Infusion in Tamuning, students from the University of Guam’s Fine Arts department and their professor Ric Castro nervously waited for Lt. Gov. Ray Tenorio’s reaction to the mural’s design.

“It was dead silence for 30 seconds,” Castro said. “He was just kind of like looking at it, and we’re thinking, ‘Is he gonna reject it or what?’”

Castro was approached over a year ago by University of Guam President Dr. Robert Underwood who partnered with the Islandwide Beautification Task Force—spearheaded by Tenorio—to complete a mural at the Archbishop Flores Memorial Loop.

“He didn’t have an expression at first,” Castro said. “He just said, “Beautiful!’”

And with that, Castro’s students set out to work on the mural.

Neill Catangay, a 21-year-old Fine Arts major, said the government of Guam wanted to beautify the wall because of its impact to the tourism industry.

“We pass by it every day even if it’s just for a few seconds,” he said. “And I guess they decided that they wanted to make it a featured landmark.”

Castro said that location was one of the best on island to paint a mural because of the high amount of traffic that drives through the area.

“This is by far the best showcase for anybody,” Castro said. “It’s the best mural location on the island because of its location and the exposure that you get on a daily basis. Everyone goes around that loop.”

In the beginning, a core group of four students, including Catangay, were chosen by Castro to work on the project.  A few left to pursue other interests, and more Fine Arts students from UOG hopped on board the project for class credit.

Catangay, who stepped up as project lead, would hold the paint at his house, which was in Latte Heights at the time. He and the other students would meet there early in the on weekend mornings and then drive to the loop to begin painting. Sometimes, they would meet in the evenings and paint for hours as well.

The entire mural surface is about 9 feet tall by nearly 300 feet long, Castro said. And at first, the students didn’t realize how large the project would be.

“It just looks like a small structure,” Catangay said. “It’s really big. Even at the ribbon cutting, (on March 9) the governor himself said he didn’t realize how big the wall is.”

First the wall had to be primed, which GovGuam finished before the students began painting. Then a pencil sketch of the design was drawn around the entire surface.

Next came the black outline of the flowers and other symbols, and then the painting could begin.

“One flower could be done in 20 minutes,” Catangay said. “Painting it would take minutes because we’re not trying to get super crazy with the flowers. We went through those kind of fast.”

Some of the base painting work was done by Department of Youth Affairs inmates, Air Force servicemen and women, and other volunteers, Castro said.

The students at UOG put in a lot of weekends and spare time to complete the project, Castro added, which, if done by a professional, would have cost tens of thousands if not hundreds of thousands of dollars. The whole project took a little over a year to complete from prepping the space to painting the details. 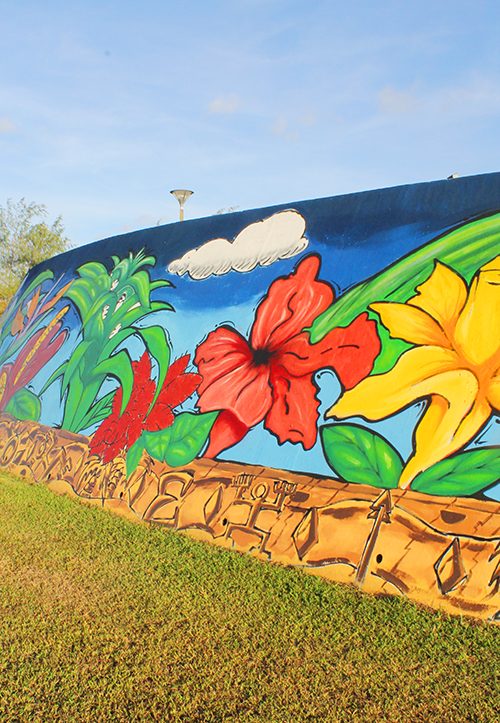 Castro said when he was approached by GovGuam to do the mural, the original design was very simple.

“The only thing we had was this sketch of flowers and a little blue in the background,” he said. “We needed to change it. We needed to make the students feel like they owned it.”

Castro said he wanted to put more culture into the design, so he added a thick, brown wooden-looking band to the bottom to give the piece a more rustic feel. Balanced out with the village flowers, Castro felt the mural appealed to a wide audience.

“There’s a renaissance for the tribal thing,” he said. “(It’s) sort of like they’re trying to rediscover their cultural identity, and the story block at the bottom was kind of fulfilling that audience: people that are looking for culture. The flowers were just for the beautification aspect of it. Showing that our island is beautiful, lush, tropical, exotic. We wanted to cater to both worlds.”

So after Castro designed the first panel, he told his students that they had the artistic license to design the rest.

“I initially did the first panel for them,” he said. “I wanted to make sure there was a template that they could follow in terms of the quality. The initial 50 feet would hold for the circumference. Once I finished that, I handed it over to the students. Where the students took over, it looks just as good.”

Castro believes this project is a good representation of the talent at the University, specifically the Fine Arts department and it’s students.

“I think it reflects well on the art department because you don’t hear a lot about what we do out there in the community,” he said. “So it really empowered the students to get some recognition. When people ask, they aren’t going to say, ‘Oh Ric Castro did it.’ They’re going to say the UOG Art department—the students at UOG did it. I want the students to take credit for it.”

Catangay said the entire experience was really fulfilling, and in the end, some of the students received a check from GovGuam for all the hard work they did.

Catangay said the University of Guam’s Fine Arts department helped him craft his skill so that he would be able to complete such a complex mural.

“If they asked me to do this in high school, I wouldn’t know what to do because I didn’t really craft my artistic skills until I got to UOG and took Mr. Castro’s class or Mr. (Joe) Babauta,” he said. “I learned these fundamental skills that are basic to every artist across the world.”