Jolted awake by a loud banging on the door, Spc. Jason Pangelinan knew the competition had officially begun.

Before the glow of dawn lit the North Carolina skies, his superiors commanded each soldier to get ready, giving them roughly 30 minutes to don one of six uniforms and head downstairs for the day’s first event.

“We didn’t know what was next so…we had to adapt,” Pangelinan said.

Testing the limits of soldiers from across the country, the Army Reserve Best Warrior competition achieves just that: determining the most adaptable solider—and Pangelinan, a sophomore biology major and ROTC cadet at the University of Guam, decided he was up for the challenge.

The competition is organized into various levels such as company, battalion, brigade, division and all-Army. Beating the competition at both the company and battalion levels, it was no surprise that Pangelinan also walked away from the brigade level as the best out of all competing soldiers from the Pacific region, which includes locations such as Guam, American Samoa, and Hawaii.

But for the penultimate event held at Fort Bragg, North Carolina, he knew training both mind and body needed to intensify.

“Trying to balance school, work, personal life—I trained whenever I had the time,” he said. “In the morning or late at night after work, I’d go for a run or hit the gym hard. We set up a schedule of events—what to do, what to practice on—whether that be my running, my strength and cardio, ruck marches, familiarization of the weapons or even just the academic part of the competition. It was all around both physically and mentally challenging.”

But Pangelinan had a history of embracing a challenge. Moving from Saipan to attend UOG for the Fall 2011 semester, Pangelinan wanted to broaden his horizons while remaining close to loved ones at home.

“I wanted to get to know more people—to be in a bigger classroom,” he said. “I wanted to meet others who were pursuing what I was pursuing. I came to UOG because it was close to home. The setting here was very much so just like home. So I was very comfortable. I was able to focus a lot more.”

And with the goal of being a pediatrician or general practitioner, Pangelinan signed up to be a healthcare specialist in the 9th Mission Support Command based out of Hawaii following his enrollment in the U.S. Army Reserve in 2013.

“I found myself here on Guam, and I decided I needed a push into (the medical) field to keep me in the direction that I want to go rather than to sway off into another path,” he said. “So the opportunity came up whether to become a healthcare specialist in the army. I saw it as baby steps to continue onto the path and as an opportunity to get the experience that I need to use later on in the future.”

It was that drive to challenge himself and the mentality to push harder that helped Pangelinan become one of 17 junior enlisted soldiers in the nation to compete in March at Fort Bragg for the title of Best Warrior in hopes of competing at the all-Army final level.

Toggling between stress and excitement, Pangelinan said throughout every level of the competition he felt a mixture of emotions.

“Don’t get me wrong,” he admitted, “it was hard, and it was very grueling, but I saw it as an opportunity to put myself out there and make new friends in the other competitors. It was pretty fun.”

Armed with an M4 rifle or M9 pistol, Pangelinan said the most fun and “relaxing” parts of the competition were the shooting challenges, “because the whole point of shooting is to relax, get your target and control your breathing and heart rate.”

The final event, which rolled from night into day, consisted of a land navigation course. Soldiers had to journey between multiple points through swamp, dense forest, and sand.

“It was fun, and it was intense,” Pangelinan said. “It was my very last event—my last grueling event—and I didn’t make it back on time. I was eliminated from there.”

Overall, Pangelinan placed fifth out of 17 junior enlisted officers in the final event of the second-to-last level of the entire competition. 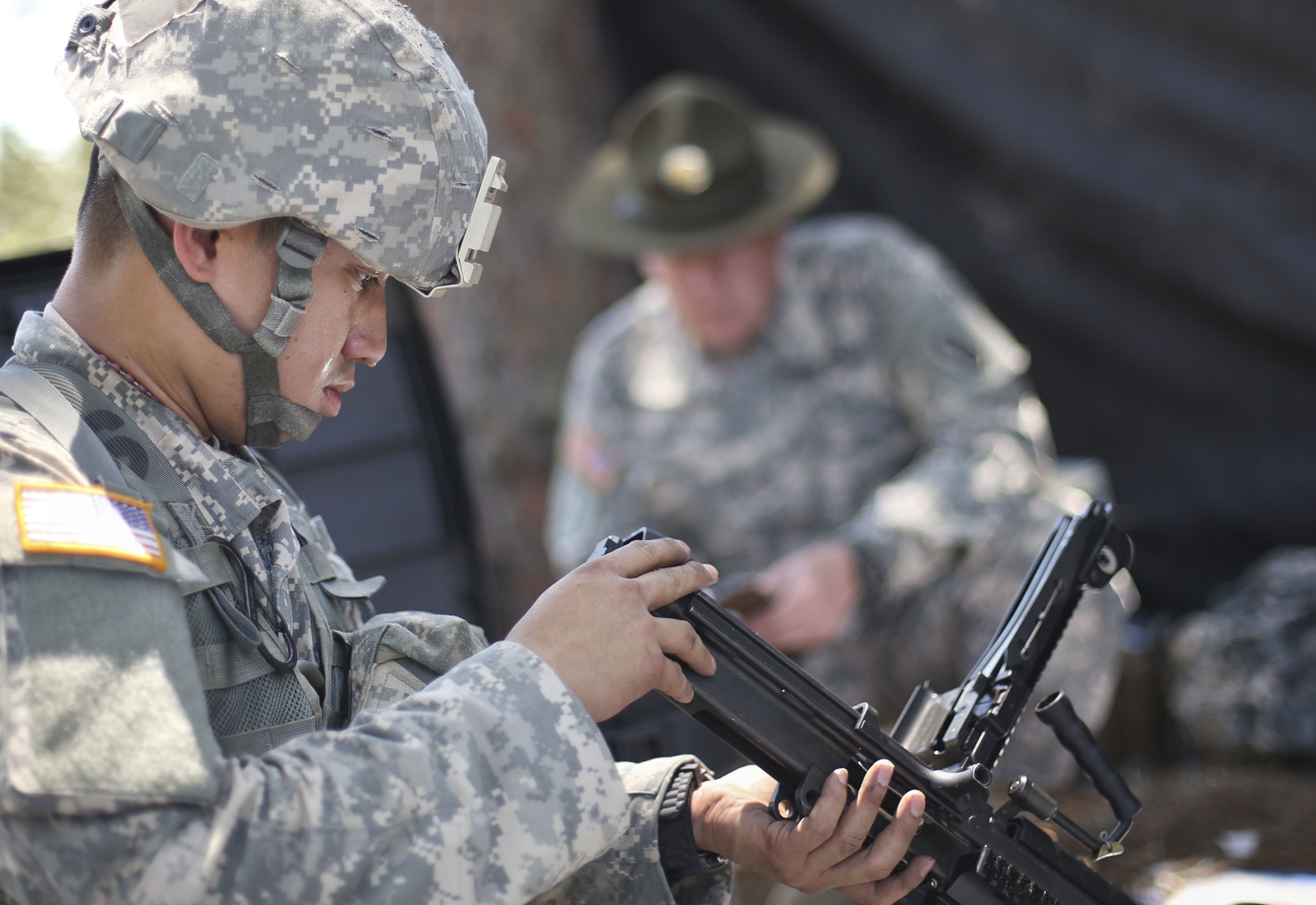 Spc. Jason Pangelinan, a sophomore biology student at the University of Guam, is tested on assembling three different weapons during the "box of weapons" mystery event during the 2015 U.S. Army Reserve Best Warrior Competition at Fort Bragg, North Carolina on May 5. Photo courtesy of Staff Sgt. Sharilyn Wells, U.S. Army.