The Guam Department of Agriculture’s Division of Aquatic and Wildlife Resources booth displayed replicas of ancient Chamorro artifacts, nestled among them a fishhook made of aliling shell.

The hook reminded him of a similar piece he was in the process of carving at Master Carver Greg Pangelinan’s home in Mangilao.

In that moment, Duenas saw a clear connection between the traditions of the past and their importance on the present.

“It’s pretty cool,” Duenas said. “Not only is it a good material to use for carving, but ancient Chamorros also used that to catch bigger fish out in the deeper parts of the ocean.”

Duenas has carved under the detailed eye of Pangelinan for the last five months, and with each project, the UOG senior learns something new from a master with more than 40 years of carving under his belt.

“Greg’s experience is priceless,” Duenas said. “If I’m doing something that could be improved, and he teaches me how to do it, I have to change a habit I have.” 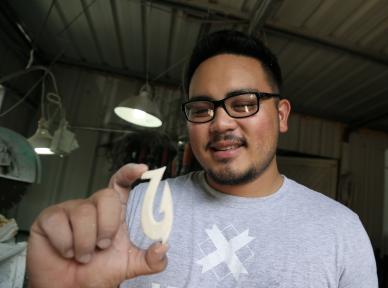 Roman Duenas holds up a hook he carved out of bone.

As an English for Education and Secondary Education double major, Duenas understands the significance of passing on knowledge.

At the University of Guam, Duenas has the opportunity to learn from all kinds of people to help him one day educate the next generations.

“I chose UOG because I want to educate the people of Guam to be successful,” he said. “UOG has helped me because I get to pick up skills that are culturally relevant to Guam, like carving, and be part of not just academia but the cultural sphere too.”

Pangelinan also imparts his wisdom on the cultural significance of the carving to Duenas.

“Greg said to be careful about incorporating symbols from a different culture into your work,” Duenas said. “It’s ok if you’re doing it for your own personal use, but if you’re mass producing, Greg said it’s not good.”

But there isn’t a lack of symbols significant to the Chamorro culture from which Duenas can choose for his own carvings. People most often produce latte stones, sling stones, or hooks, he explained.

As for materials, Duenas said he never has to look farther than the beach or sometimes his own dinner plate.

“The material I use for carving is mainly seashell like giant clam and bone,” he explained. “Bone is really easy to get ahold of. When I go to King’s Restaurant, I just buy the oxtail soup and take the bones home.”

Duenas carves out three to four hours a week to practice the tradition either at home or at Pangelinan’s home workshop. With a lot to still learn, Duenas said he hopes to one day become a master carver and perpetuate the cultural practice he feels such a strong connection to.

“I definitely feel a special connection with my ancestors,” he said. “I’m half Chamorro, and in terms of cultural preservation, it’s cool to use symbols and materials my ancestors used thousands of years ago.” 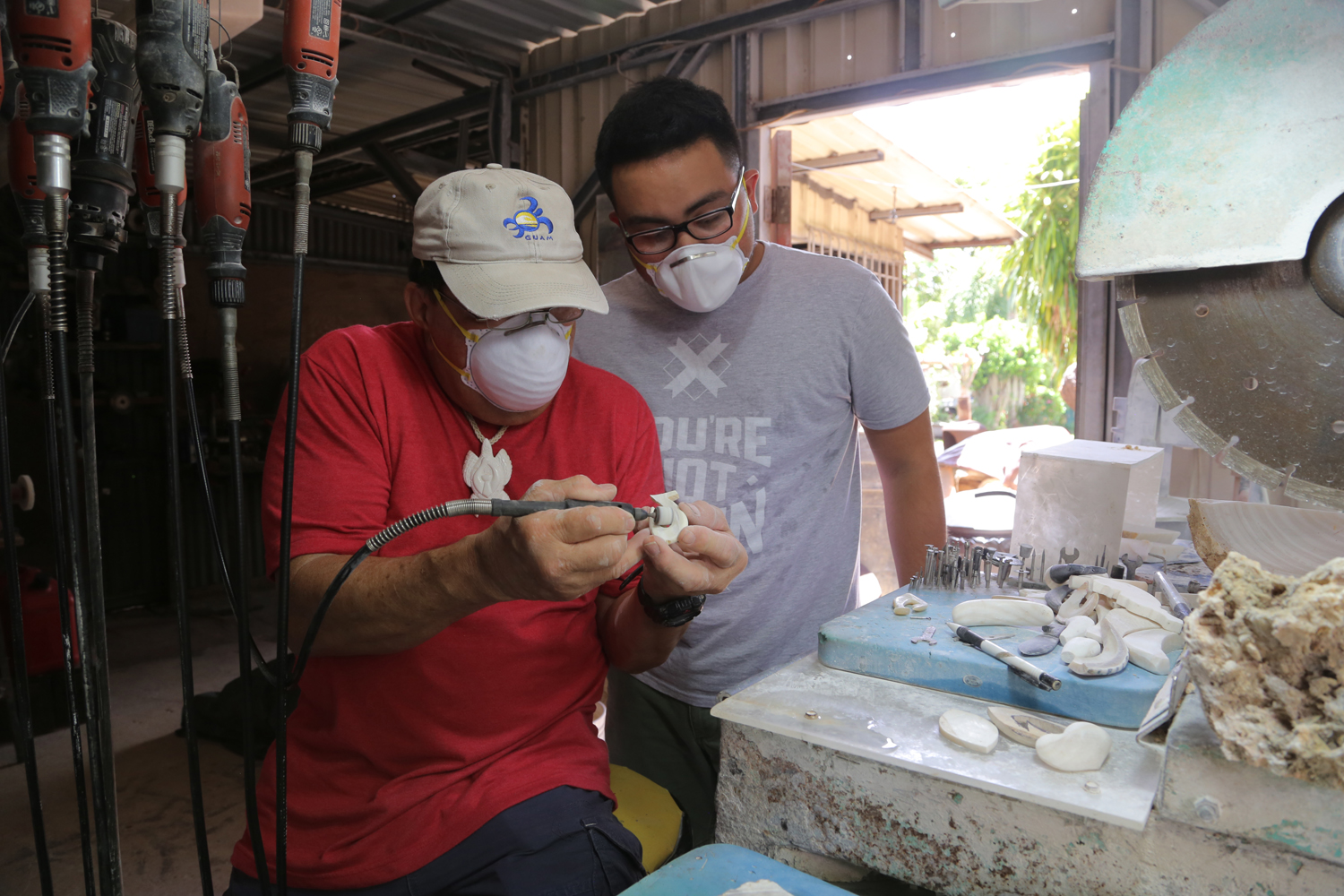