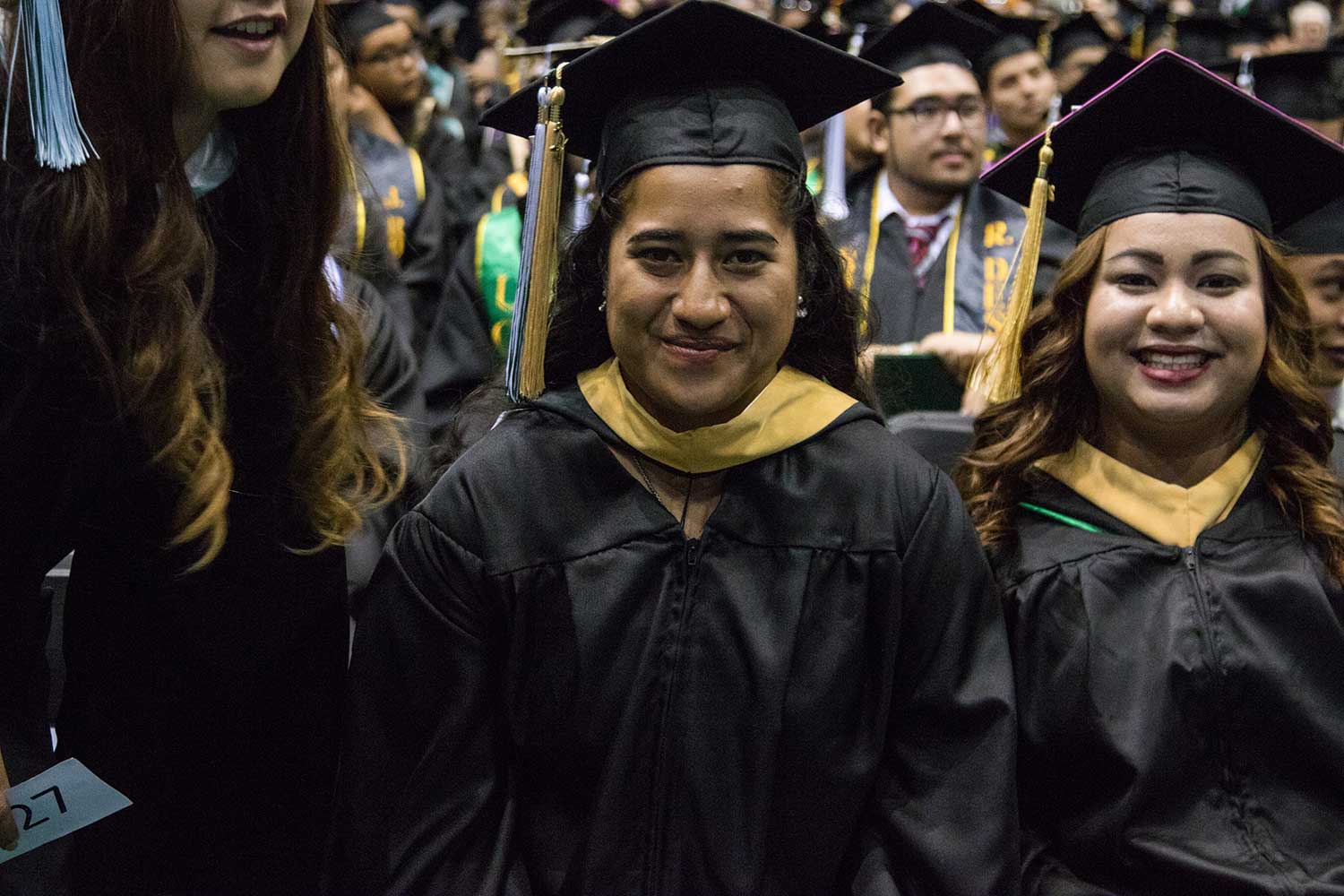 Sylvia Elias waits for her name to be called during the Fañomnåkan (Spring) 2017 Commencement Ceremony held May 21, 2017.

*Article Originally Posted by
By Bill Jaynes
The Kaselehlie Press
May 17, 2017

Pohnpei—On Sunday, May 21, 26 year old Sylvia Elias of Madolenihmw [marched across] a platform in Guam to receive a Master’s degree in Social Work through the University of Hawaii Distance Learning program. Elias is a strong advocate and powerful voice for the elimination of family violence, a young voice made bolder and stronger by international backing.

In late April she met with several leaders including Chairman Peter Lohn of the Pohnpei State Legislature. Senator Lohn is the Chairman of the Judicial and Governmental Operations Committee. On the agenda was the newest version of a bill to criminalize and set penalties for Family Violence. The bill was first introduced approximately 9 years ago, but every time there is a new legislature, bills that have not been passed disappear and have to be re-introduced if they are to be considered. The latest complicated bill is 29 pages long. Reading through the bill it is striking to see how many times the words “if available” are used in reference to mandatory counseling, shelters, and other services that simply aren’t available.

Elias said that Senator told her at that time that he wants her to testify in front of the committee possibly sometime this month either in person after graduation when she returns to Pohnpei or by Skype if before that time. It’s been a month since that conversation and she says she hasn’t heard anything since then. “Not a word, and, if they don’t act on it until I return, I will definitely push for it as soon as I arrive,” she wrote.

The culture of Pohnpei essentially dictates that young people are not truly adults until they are in their 30’s. “Without the external supports and global supports, I wouldn’t be doing this, she said, “I would get tired and lose the interest and energy to move forward. My age and my gender are my main weaknesses in these efforts, because the cultural perspective of people I deal with is limited to how they define culture and tradition.”

“Women are very important in society. I believe that Culture is evolving and we need to incorporate our traditions with reality,” she said. “I see a little progress now, better than before. More people are hearing us out,” she said.

She said that her passion for advocating on behalf of victims of family violence began when she was young when she saw friends and even some family members who were ill-treated either physically, psychologically, or both. She said it was sad to watch but she didn’t feel like there was much she could do about it other than just to be there to listen. It was when she was an undergraduate pursuing a degree in Social Work and she did an internship in Pohnpei with the Pohnpei Women’s Council that the seeds of her future advocacy began. She was also selected to facilitate focus groups of girls with the topic of family violence and domestic violence with the F.S.M Dept. of Health and UNFPA. 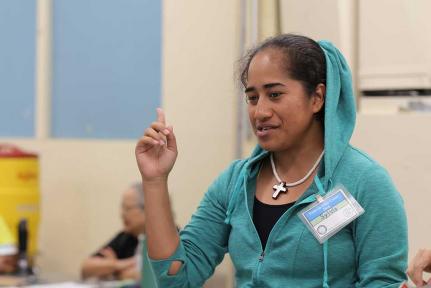 “In the focus groups, girls started to open up and shared their personal stories that happened and was still happening to them in their households. It was so sad, they cried and shared their deepest secrets,” she said. “So when I shared this experience with my instructors for social work at the University of Guam, they told me that in the social work field, when consumers open up to social workers, we must provide the treatment and intervention needed. But nothing could be done because there is no law. I felt really bad. I could not refer those individuals anywhere. I just left with a saddened heart,” she said.

“So after that summer, I decided to take the bill with me to Guam to use it in my Policy and Advocacy courses during my senior year in the Bachelors of Social Work Program at UOG.” She said that students in the Social Work program studied the bill in 2014 and 2015. They prepared written testimonies and post cards and sent them to the Pohnpei Legislature. She also came to Pohnpei in 2016 with a group of students who gave oral testimony to the Legislature.

Members of the Pohnpei Student Organization also filed a petition with the Legislature urging to pass the “Family Violence bill”. “Some of the Pohnpeian boys did not sign. They said it is our culture to beat the wife,” she said. “They think its ok to beat their wives. That’s what they learned from what they saw growing up.”

In October 2014 a report on Family Health and Safety quantified the prevalence of family violence in the FSM. The report was a diligent and sincere effort to provide real and helpful statistics. That was part of the project that Elias was working on when she was in Pohnpei during the summer of 2014. The numbers showed a prevalence of domestic violence against women in particular that was in line with global statistics. The difficulty is that it is such a personal tragedy that many cases of domestic violence go unreported. Some say that is true in the vast majority of cases.

“In May 2016, through my social work mentors on Guam, I was accepted and attended the Global Indigenous Women’s Leadership School in New York. I brought my advocacy project on Family Violence and presented it during the two week long school for indigenous women leaders around the world. At the end of 2016, they awarded me a grant to fund the implementation and monitoring stage of my advocacy project. This is where my grant came from. I had from January to April,” she said. It was what paid for her most recent trip where she met with leaders and also spoke at a Town Hall meeting on the problem of Domestic Violence.

“I recently went to Rome for the Global Indigenous Youths Conference and I shared the family violence issue in another setting and organization to gain more support,” she said. She and two delegates from Australia represented the Pacific as “focal points” (a term used to describe the spokespeople of each region) at the conference. “We are advocates for indigenous youths all around the world so my strongest points and inputs were on the issue of family violence and gender equality. This was a meeting in Rome with the United Nations Food and Agriculture Organization headquarters,” she said. 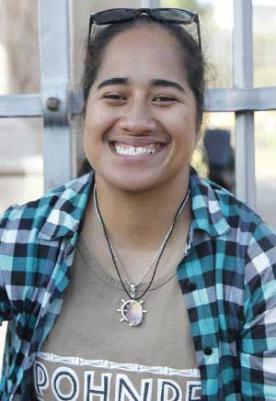 Sylvia EliasAfter graduating, she will return to Pohnpei for the summer where she intends to continue her advocacy efforts with dogged determination. She said that since she received a full scholarship from Guam she is obligated to return to Guam for at least two years. She said that she will use those two years to look for a best fit PhD program. She wants to pursue a PhD in Human Rights or a related field.

Meanwhile, she will continue her advocacy in Pohnpei from a distance as she has done.

During our online chat we asked her that if she had one quote that might appear in a box to accompany this article, what it would be. It was a tough question and we knew it. She thought long and hard about it and finally responded. “Change is scary but with a collective and respective community, we can preserve our culture, provide a safer environment, and protect our people.”

Pohnpei has another young female champion for its people, and she’s a barnstormer!