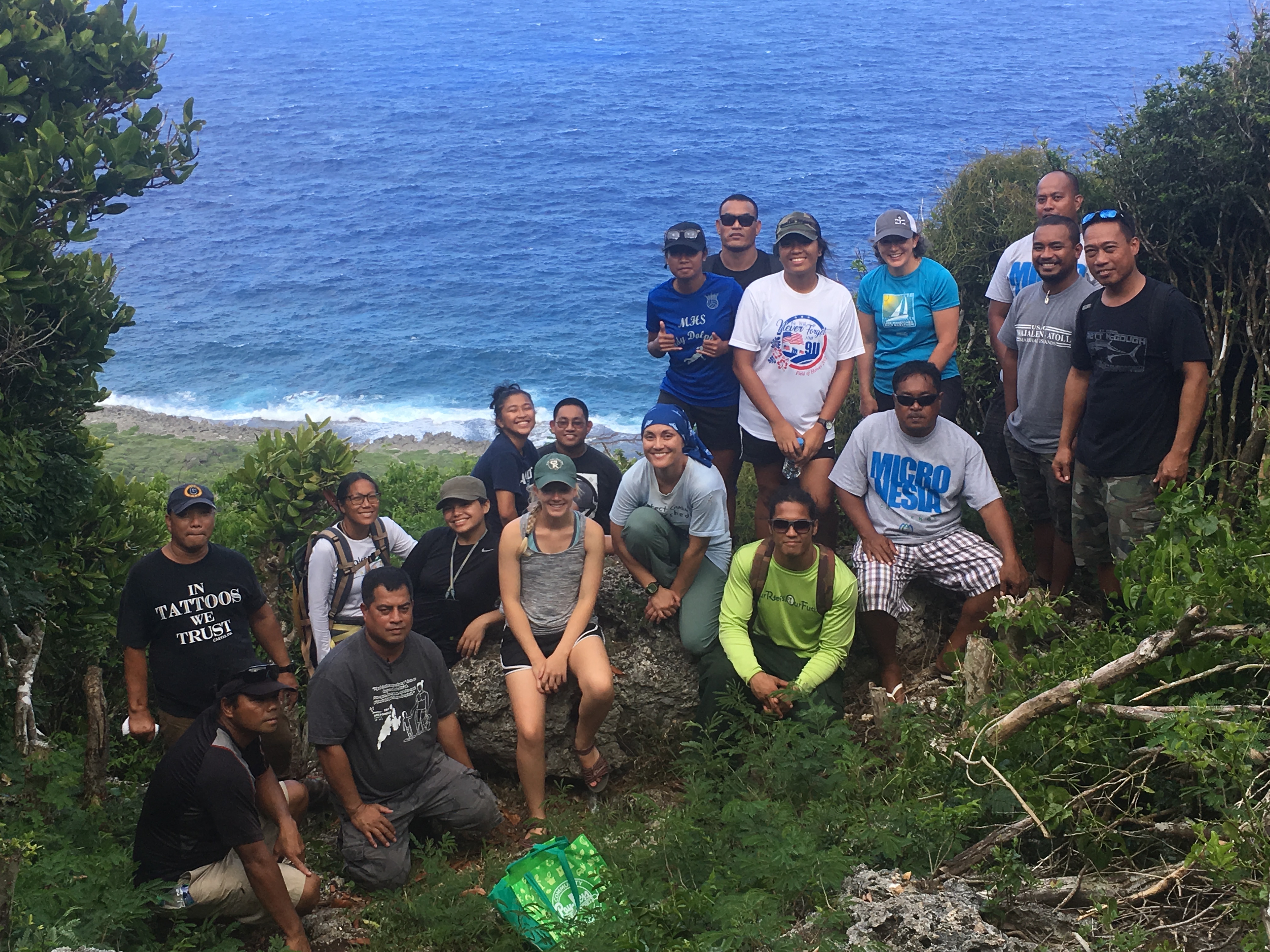 Photo Credit: University of Guam Western Pacific Tropical Research Center
Participants and instructors of the “Tropical Forest Ecology” course pose for a photo on the East Coast of Guam. The 17-day course was offered by the University of Guam in partnership with Iowa State University and the U.S. Forest Service from May 21 to June 7.

Forestry workers from around Micronesia have returned to their home islands with newfound knowledge and a fresh perspective on conservation following an intensive 17-day course offered by the University of Guam (UOG) in partnership with Iowa State University and the U.S. Forest Service. Professors from both universities led 15 participants in a “Tropical Forest Ecology” course from May 21 to June 7.

“This is the third time we’ve taught the course, and it was the first time we had people working in forestry from several islands in Micronesia come together for a learning extravaganza,” said Ross Miller, an entomologist and research scientist with the Western Pacific Tropical Research Center at UOG. “Our hope is that it will inform their conservation work and help protect the terrestrial ecosystems on their home islands.”

Miller headed the course along with Haldre Rogers, an Assistant Professor in the Department of Ecology, Evolution, and Organismal Biology at Iowa State University. The bird-less forests of Guam inspired Rogers’s research and Ph.D. thesis focusing on the wide-ranging effects of bird loss on the forests where they disappeared.

The intensive course took students on a comparative journey through the forests of Saipan and Guam. Participants worked in groups to develop a hypothesis and then headed into the field to collect data. Evan Fricke, a post-doctoral researcher from Rogers’s lab, worked with the group on Saipan, and Ann Marie Gawel, a doctoral candidate in Rogers’s lab, assisted on Guam.

The comparison of forests in Guam and Saipan proved impactful for the students.

“To see the fragmentation and loss of forests on Guam is very alarming,” said Wendolin Roseo Marquez, a participant from Pohnpei who works as a Senior Grants Officer with the Micronesian Conservation Trust.

Levani Shiro, a student at Northern Marianas College, said she was also greatly surprised by the enormous impact invasive species have had on the ecosystems of Guam. “It was strange being in the field in Guam and not seeing or hearing any birds. It also seemed like there were many more mosquitoes than in the forests of Saipan,” Shiro said.

The students were eager to return to their home islands to apply what they had learned.

Valentino Orhaitil, a course participant from the Department of Forestry in Yap, said he felt the class was very important for natural resource managers and that it increased his knowledge base of relevant information that he plans to apply in the forests of Yap.

“It was very intense,” he said. “We covered so much material in such a short time, but the instructors were amazing.”

Marquez said he hopes to bring the course to Pohnpei in the near future to help build the capacity of terrestrial resource leaders and managers.

“The content was phenomenal. The course was fantastic, and the instructors were very resourceful and really knew their stuff,” he said. “Marine science gets a lot of attention, but farming and forestry are not as lucrative or considered as cool for some people.”

Rogers looks forward to the growth in exploration and research that this course may have inspired.

“What excites me about this course is that it allows students to participate in novel research projects that then generate more questions for future exploration,” Rogers said.