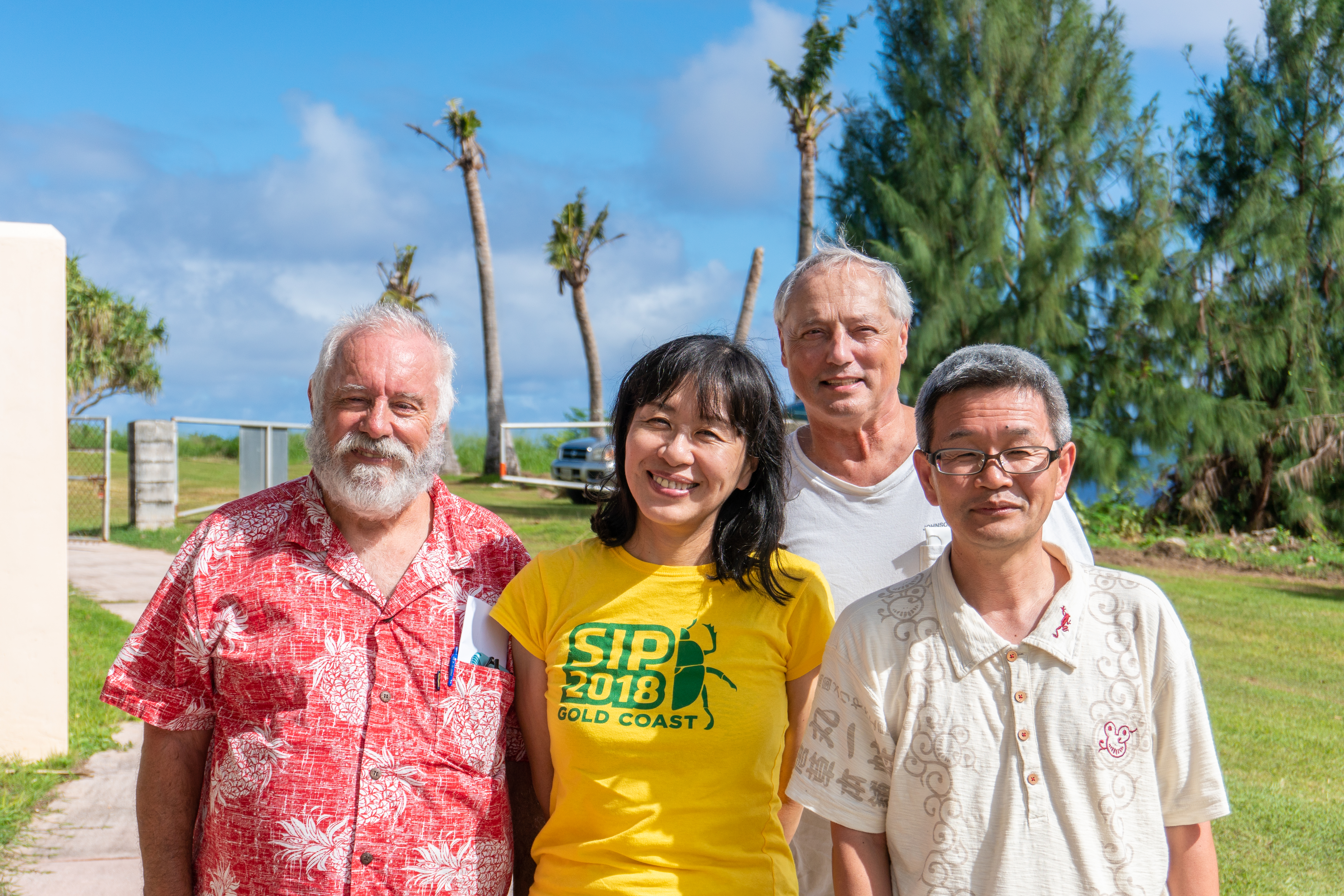 Scientists across the Pacific region are collaborating to control the spread of the coconut rhinoceros beetle (CRB), an invasive species that is lethal to coconut palm trees. Most recently, University of Guam entomologist Dr. Aubrey Moore hosted two research entomologists from Japan who were returning from a CRB fact-finding trip in Palau.

One way to control the beetle population that has been successful elsewhere is infecting them with a virus called OrNV, which attacks only rhino beetles. OrNV was introduced many years ago into rhino beetle populations on many Pacific Islands that had been invaded by the CRB, and the damage they caused disappeared. Unfortunately, the CRB population, which is rapidly killing coconut palms on Guam and elsewhere in the Pacific, is now resistant to OrNV strains that worked in the past.

Madoka Nakai, a professor at Tokyo University of Agriculture & Technology, and Shin-ichiro Asano, an associate professor at Hokkaido University’s Research Faculty of Agriculture, are virology experts who are interested in understanding the mechanism that helps CRBs resist viral infection. They stopped in Guam from Nov. 1–4 to gain a better understanding of the issue in Guam after their time in Palau.

“While in Palau, we did detect the virus in beetle DNA, but we found no indication of infection,” Nakai said.

This was disappointing news to Moore, but the good news is that these scientists will be collaborating to find a solution to control the destructive beetle on Guam.

Nakai is excited by the possibilities of this research.

“We are asking important questions, such as what size a beetle population must be to cause the devastating damage we see on Guam? How are the beetles resisting the virus? What are the differences between the Guam biotype (CRB-G) and other biotypes?”

With funding from the Japan Society for the Promotion of Science, Nakai proposes to undertake basic biology studies of the CRB-G biotype from Guam and possibly crossbreed it with beetles not of the Guam biotype to understand the mechanism that helps it resist viral infection.

“We are working with a Pacific-wide collaboration of scientists trying to solve this problem that is critical for Pacific Islanders,” Moore said. “Researchers from Guam, New Zealand, Malaysia, Japan, Papua New Guinea, and the Solomon Islands are united in their efforts to find a virus that can be used to control and be lethal to the coconut rhinoceros beetles before we lose most of our palms and to stop it spreading to more islands.”