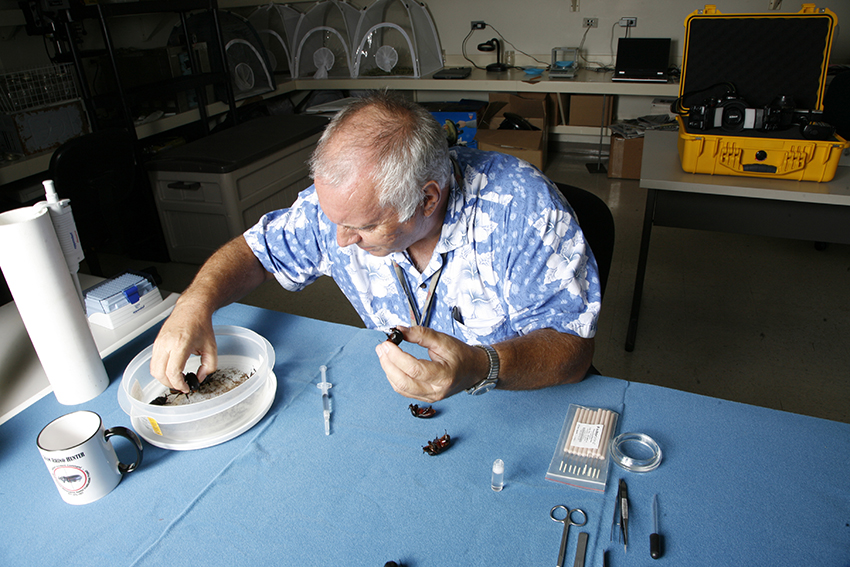 In this 2009 file photo, UOG entomologist Aubrey Moore feeds a solution containing the naturally occurring insect virus OrNV to coconut rhinoceros beetles. This bio-control agent has proven successful in controlling CRB populations on many Pacific Islands. Its first attempt in Guam in 2009 was not successful but led researchers to discover that the Guam coconut rhinoceros beetle is a different biotype. Insect pathologist James Grasela is working to find the appropriate strain of the virus that will be effective for the biotype of beetle decimating coconut trees around Guam.

The Office of Insular Affairs (DOI-OIA) of the U.S. Department of the Interior has awarded $239,994 to the University of Guam College of Natural and Applied Sciences in response to a grant proposal titled “Establishment of Self-sustaining Biological Control of Coconut Rhinoceros Beetle Biotype G in Micronesia” submitted by Aubrey Moore, an entomologist at the University of Guam.

Part of the funding will be used for partial support of an existing project to implement self-sustaining control of coconut rhino beetles (CRB) throughout Guam by introducing an insect disease caused by a naturally occurring insect virus that infects only rhino beetles. This virus is called Oryctes rhinoceros nudivirus, or OrNV.

Different strains of OrNV have been very effective in providing long-lasting control of rhino beetles on many Pacific Islands. Typically, after the virus is introduced into the CRB population, damage to coconut palms and other palms falls to very low levels within a few months and stays at those low levels indefinitely.

The other part of the grant funding will be used to pay the salary of James Grasela, an insect pathologist who has spent his career finding ways to control pest insects with insect diseases instead of poisoning them with insecticides. Grasela has been working under a contract at the University of Guam for the past two years under a previous DOI-OIA grant. He has screened OrNV strains collected from several locations in the Asia-Pacific region and has found two that have potential for controlling the biotype, CRB-G, causing so much damage on Guam.

For more information regarding research on the CRB and other insects conducted by scientists at the University of Guam, please visit https://www.uog.edu/wptrc/entomology.