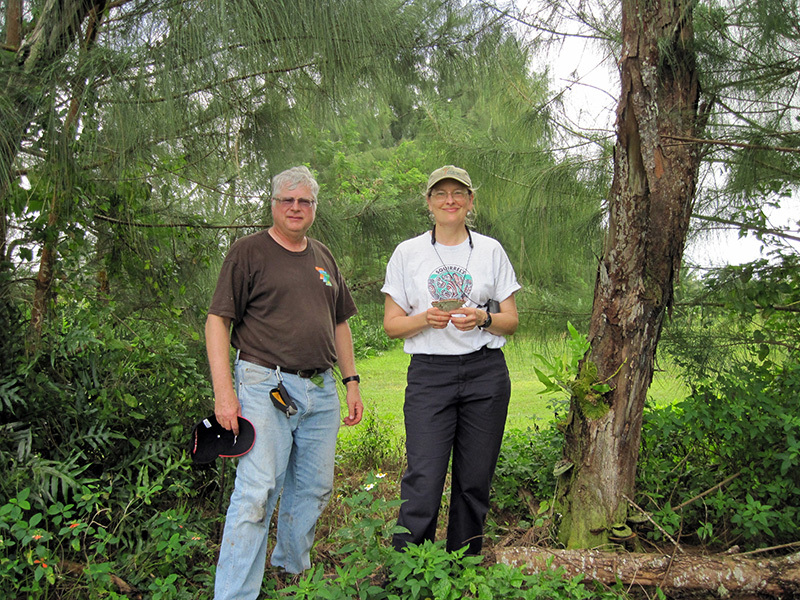 University of Guam plant pathologist Robert Schlub, left, and Melodie Putnam, director of the Oregon State University Plant Clinic, in the field during Putnam’s 2010 visit to Guam in which they established the presence of the bacterial wilt in Guam’s ironwood trees. 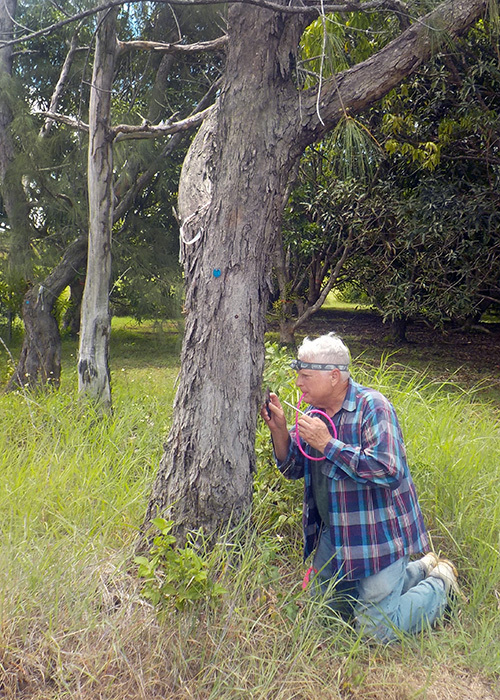 University of Guam plant pathologist Robert Schlub uses a hose connected to an aspirator to collect termites. The guts of the termites will be analyzed for bacterial wilt and wetwood bacteria. 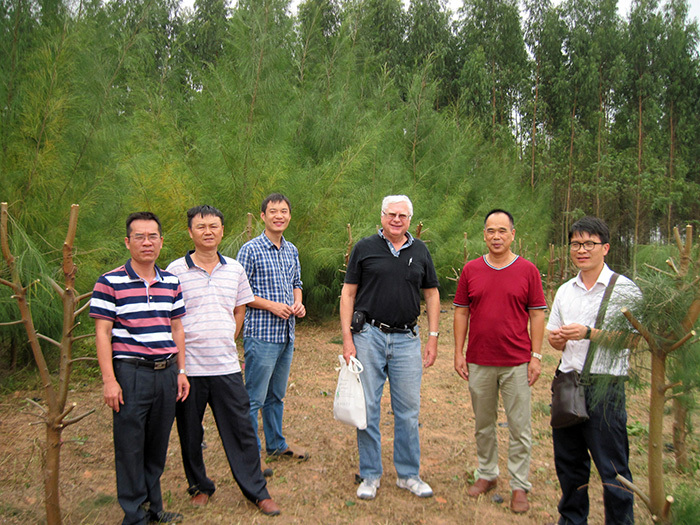 University of Guam plant pathologist Robert Schlub meets with ironwood tree breeders in October 2019 at the Dianbai Forest Institute in China. The institute is selecting and breeding ironwood trees for resistance to the same Ralstonia solanacearum pathogen that infects Guam’s ironwoods. Three varieties from China were introduced to Guam in 2012, and all have remained disease-free. 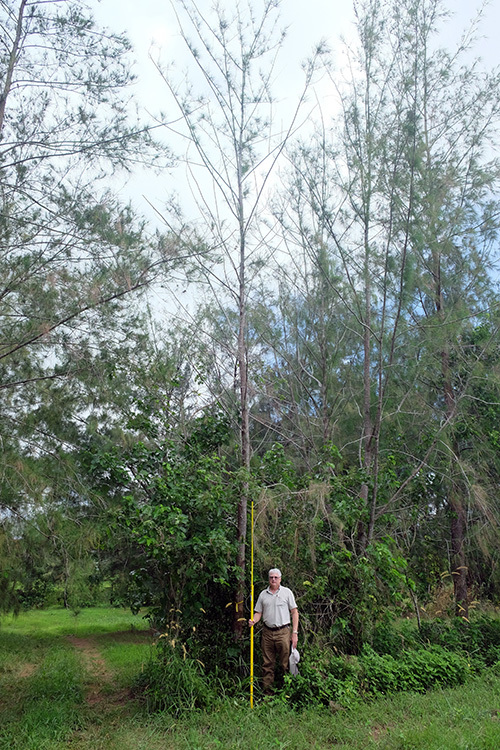 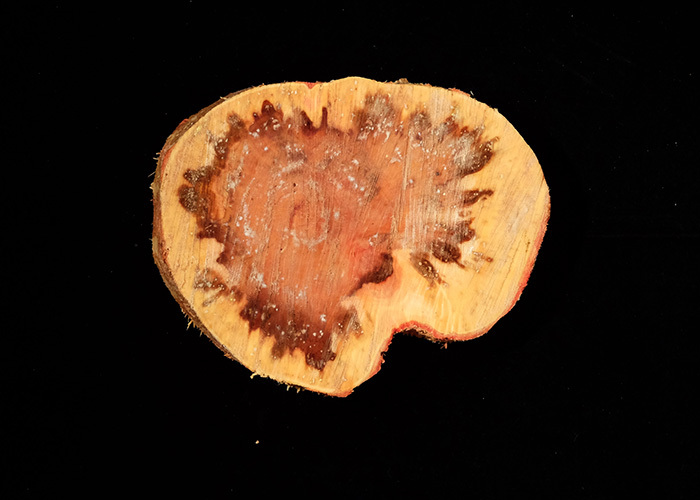 A cross-section of a declining ironwood tree in Guam shows drops of whitish ooze caused by the bacterial wilt pathogen and a ring of dark stained tissue caused by wetwood bacteria.
❮
❯

With U.S. Department of Agriculture grants totaling almost $370,000, researchers from the University of Guam and other institutions are in the process of analyzing termites to assess their role in infecting what is now more than 20 percent of Guam’s ironwood trees, locally known as gago, with a deadly bacterium.

More than 18 years ago, the ironwood tree — a hearty, salt-resistant species important for soil erosion control and a protector of vegetation from the wind — unexpectedly began dying off in Guam. This condition is now referred to as “ironwood tree decline.” It took another six years to find its main culprit: the bacterial wilt pathogen known as Ralstonia solanacearum

Since then, under a longstanding effort funded by various USDA sources — the Western Sustainable Agriculture Research and Education program, the McIntire-Stennis Capacity Grant, the U.S. Forest Service, and the Renewable Resources Extension Act Capacity Grant — UOG researchers have been monitoring and surveying the trees to better understand and stop bacterial attacks, planting new trees selectively bred to be resistant to the bacterium, and more recently, pinpointing how termites might spread the wilt bacterium.

Recent evidence points to the Nasutitermes takasagoensis termite, which has a taste for ironwood trees, scientifically known as Casuarina equisetifolia.

“We know the termites chew on the roots, so it’s very possible that the termites are carrying bacteria either internally or on the outside of their body,” said principal investigator Robert L. Schlub, a professor with a doctorate in plant pathology and a researcher in UOG’s Cooperative Extension and Outreach unit. “Because of this correlation between the termites and disease, we think they are likely the means of transmitting it.”

In collaboration with the University of Hawaii and Louisiana State University, a UOG team collected termites and samples from ironwood trees. Next, they will extract the guts of these termites to determine if the wilt or other pathogenic bacteria are present. That will confirm the termite’s potential to spread the bacteria responsible for the ironwood decline.

Tree samples will be sent to the University of Hawaii, where co-principal investigator Mohammad Arif, who holds a doctorate in biosciences, and his graduate students will sequence and identify the bacterial strains with a rapid assay test developed by former graduate student Sujan Paudel. Efforts to analyze the termites’ guts will be led by LSU’s Claudia Husseneder, another co-principal investigator.

Under the grant, work has also included planting ironwood cultivars new to Guam in hope that resistant trees may be identified — a move with which China has found success. Since 2012, hundreds of trees grown from seeds from 21 countries have been planted around Guam, including on farms, a golf course, and on UOG research stations. All of the trees remain disease-free. Over the next two years, hundreds more will be planted in dozens of new locations.

The research and funding to reduce ironwood tree decline in Guam will continue until 2022. This month Schlub was awarded additional funding for 2021 and 2022 through the USDA Hatch program to determine which other plant species on Guam may harbor the ironwood pathogen.

“The goal of the projects,” Schlub said, “is to provide new scientific insight so we can better manage the problem, but also shrink the footprint of the bacterial disease and reduce the likelihood that it will spread to the neighboring islands, Hawaii, and the mainland.”