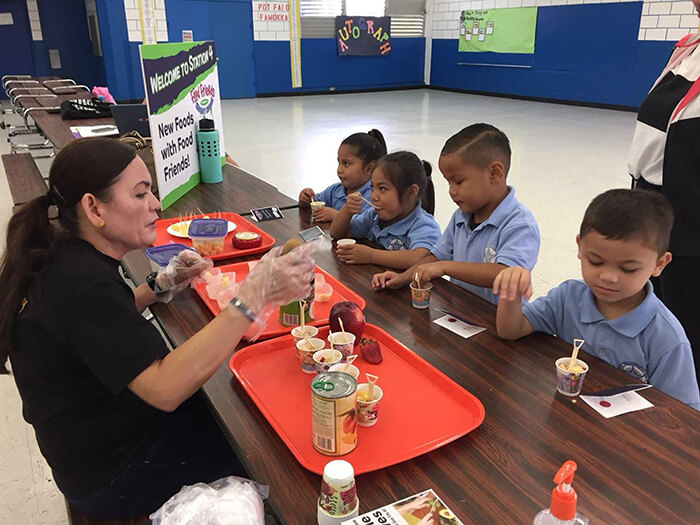 University of Guam Extension Associate Clarissa Barcinas brings “Food Friends,” one of the many activities of the Children’s Healthy Living Program, to local elementary school students to promote healthy eating.

More than 27 percent of children living on Guam between the ages of 2 and 8 were found to be obese or overweight, according to public-impact research from the Children’s Healthy Living Program at the University of Guam. The findings were published on Aug. 20 in the journal Nutrients.

Guam’s statistic sits just above the national average, based on reports from the U.S. Centers for Disease Control and Prevention.

“The big — and concerning — take home message is the unhealthy habits and behavioral patterns we found likely contributing to this high rate: too much screen time, the processed and sugary foods and beverages, and, most surprisingly, poor sleeping habits,” said co-author and program lead Rachael T. Leon Guerrero, a registered dietitian who holds a doctorate in human nutrition. “It’s a dangerous territory to be in since childhood weight issues can lead to obesity in adulthood, which only increases their risk for health problems like cardiovascular disease and cancer among others.”

A survey of 860 children

The study surveyed 860 children and their caregivers and found that 99 percent of children did not consume the recommended daily fruit and vegetable intake (1 to 1.5 cups per day), while 40 percent did not meet the recommended daily hours of sleep (between eight and 11 hours). Obese or overweight children are statistically more likely to suffer from sleep disturbances.

Nearly 85 percent of children exceeded the two-hour recommended screen time. The average was five hours per day, which is comparable to figures in the states. Among the group, 83 percent consumed sugary and sweet beverages. The recommended consumption is zero.

Those who considered themselves part of the Westernized lifestyle (80 percent) — which contains processed, high fat, and sugary foods — were twice as likely to be overweight or obese. More than half of the children (58 percent) also came from families living below the poverty line, and more than 80 percent were receiving some form of food assistance.

The data helps fill a longstanding gap in health data collection in the United States, which has historically omitted Pacific Islanders from many national surveys and studies often used to inform prevention strategies and programs designed to reduce obesity rates.

In Guam, the program — officially known as the Children’s Healthy Living Program for Remote Underserved Minority Populations in the Pacific Region — is a partnership among the University of Guam, the government, and schools that tracks children’s weight rates on Guam and throughout the region and implements interventions to help improve them.

Most recently, researchers collected data in March 2020 to analyze the effectiveness of those interventions. Those results are expected in 2021.

“We need to better understand these types of disparities so we can help our communities and their children maximize their health and well-being,” Leon Guerrero said.

The study was supported with grants from U.S. Department of Agriculture’s National Institute of Food and Agriculture.