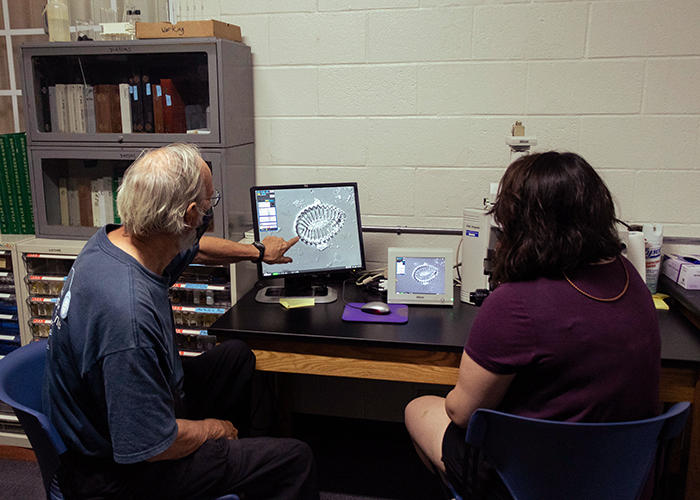 UOG Professor Emeritus of Biology Christopher Lobban and biology student and research fellow Gabriella Prelosky examine a single-celled algae under a microscope that they discovered in a mud sample from Yap. They are preparing a research paper to document two diatoms that are potentially new species. 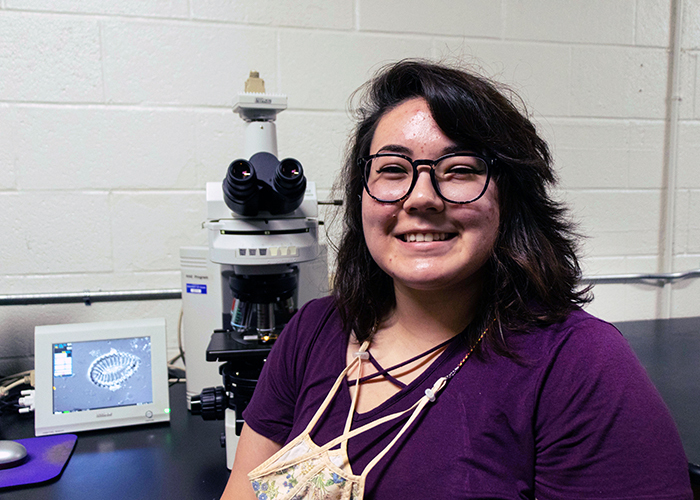 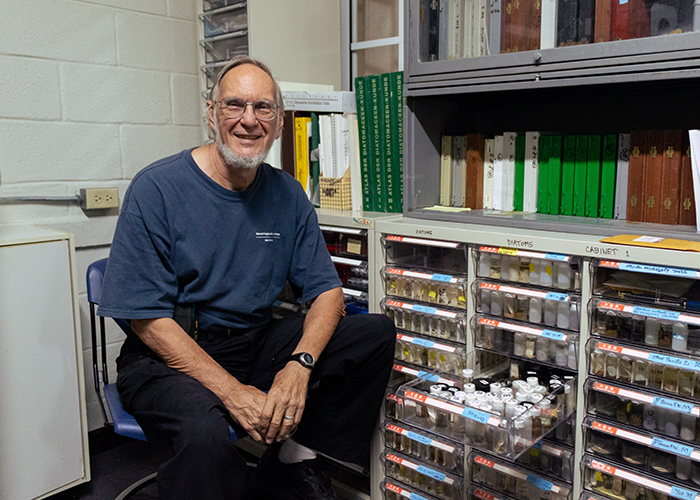 Christopher Lobban, a University of Guam professor emeritus of biology, in the Microscopy Teaching & Research Laboratory that he operates on the UOG campus. Lobban and his student research fellow, Gabriella Prelosky, are working to document and name two potentially new species of diatoms they found in the mangroves of Yap.

Gabriella Prelosky, an undergraduate biology student at the University of Guam, is in the process of naming two potentially new species of diatoms that she found while examining a mud sample from a mangrove in Yap. Diatoms are single-celled algae found in oceans, lakes, and rivers.

“They’re primary producers, so they’re photosynthetic organisms,” said UOG Professor Emeritus of Biology Christopher Lobban, Prelosky’s mentor. “The other characteristic they have is that they’re the base of the food chain — they’re part of the reason why mangroves are rich areas. In freshwater studies, there’s been a push to know more about water quality, and diatoms act as water quality indicators.”

Prelosky is working in Lobban’s Microscopy Teaching & Research Laboratory on the UOG campus for a research fellowship with the NSF INCLUDES: SEAS Islands Alliance program, a $10 million initiative funded by the National Science Foundation to broaden participation in STEM fields of students in U.S. territories and affiliated islands.

In studying the mud sample, Prelosky came across a very long figure.

She said, “I took a couple pictures and showed it to Dr. Lobban, and he said, ‘I’ve never seen anything like that before.”’

Lobban sent the pictures to a colleague, who identified the specimen as a member of the genus Gompotheca.

“At that point, we started thinking that we found something new,” Lobban said. “There are only two species in the genus Gompotheca, and they’re both characterized as being very rare. One species had been studied in a scanning electron microscope, and we can see the differences between them, so we know it wasn’t that one. The second one doesn’t even look like it belongs in the same genus.”

“Dr. Lobban noticed that it looked like a different species,” Prelosky said. “But what was distinct about it is that it had these arches and these flaps. He looked more into it and said it was probably a new species as well.”

According to Lobban, new species are being found all the time because marine tropical diatoms have not been extensively explored. Much of the literature on single-celled algae dates to the 1800s.

Both findings will officially be new species once a paper about the diatoms has been peer-reviewed and approved for publication.

‘I wanted to name them after people important to me’

In documenting and describing the species in a research paper, Prelosky will also get to name them. She announced the names at the first annual UOG STEM Conference, which took place virtually from April 16–17.

“The first one is named Gompotheca marciae,” Prelosky said. “I talked to my parents about naming them after my two grandmothers: Mary from my dad’s side and Marcia from my mom’s. They have similar names, so it was easy to combine them.”

The NSF INCLUDES: SEAS Alliance is administered by the Center for Island Sustainability and the Sea Grant program at the University of Guam and collaborates closely with the Guam EPSCoR program, also funded by the National Science Foundation.