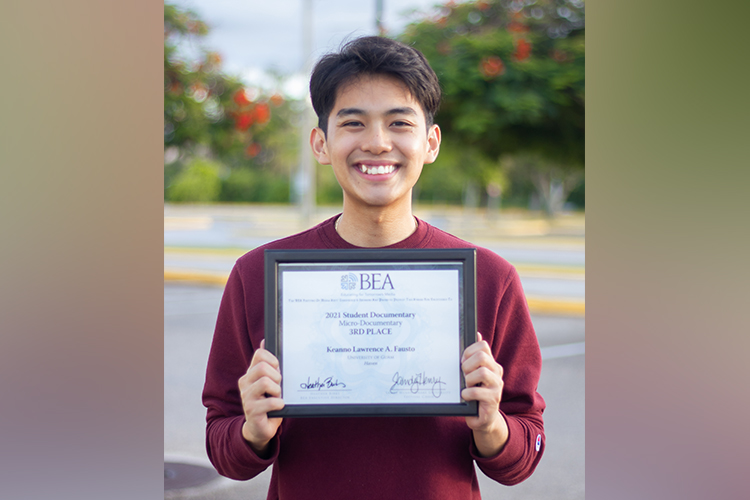 Keanno Fausto holds his 2021 BEA Festival of Media Arts Award for his documentary on a transgender woman’s journey.

“Haven" tells the story of a local transgender woman who overcame personal traumas to help her island prosper.

Lasia Casil talks about the importance of having a safe space for Guam’s LGBTQ+ community in a scene from Keanno Fausto’s micro-documentary, “Haven.”

The colors of Pride Month are particularly bright for Keanno Fausto, a communication alumnus from the University of Guam who recently won a national award for his documentary on a local transgender woman. Fausto took third place for his micro-documentary, “Haven,” at the 2021 Broadcast Education Association (BEA) Festival of Media Arts.

The festival is an internationally judged exhibition of faculty and student work. With over 1,300 entries representing more than 250 universities, Fausto’s film stood out from the competition, earning him a specialized screening of his film at the awards ceremony.

“This is the first time a UOG student has won a BEA award in the documentary category, as it is exceptionally competitive. We were up against top schools for journalism. Keanno did outstanding work,” said Raymond Anderson, UOG professor of communication.

The documentary features Lasia Casil, Guam’s first openly transgender senatorial candidate and founder of Guam Pride, an LGBTQ+ rights activist organization. It follows her journey and return to Guam after leaving the island to escape workplace discrimination as a transgender woman. Through a collection of personal interviews, archival footage, and direct cinema scenes, Fausto shares Casil’s story of overcoming personal traumas to help her island prosper.

Fausto was inspired to tell Casil’s story after hearing her panel discussion at a diversity and inclusion conference.

“What inspired me to learn more about her story was her perseverance to face the odds in order to help our island towards a more accepting culture,” he said. “I decided on this topic of transgender rights because it is a topic that is often not addressed locally.”

Having worked primarily on fictional stories in the past, documentary filmmaking was new territory for Fausto. He said his biggest challenge was overcoming the intimidation of having to accurately tell a person’s life story within the span of seven minutes.

“It served as a learning process — allowing me to not only develop my skills technically, but also learn about local issues that I was not previously aware of before. By listening to Lasia’s story and struggles from her personally, I learned that problems I saw on national news occurred here in Guam, too,” he said.

Fausto graduated in May 2020 with a bachelor’s in communication and a concentration in mass media and journalism. He said he hopes to use the medium of documentary filmmaking as a platform to bring awareness to issues that are often overlooked in society.