Kehani P. Mendiola, a public administration and criminal justice double major at the University of Guam, was announced today as one of 62 students nationwide to be selected as 2021 Truman Scholars. The Truman Scholarship is the premier graduate scholarship for aspiring public service leaders in the United States, granting recipients up to $30,000 toward their graduate studies, priority admission at premier institutions, and significant opportunities for federal internships and professional development.

The Truman Scholarship, a living memorial to the 33rd U.S. president Harry S. Truman and his legacy of public service, selects recipients based on demonstrated leadership potential, commitment to a career in government or the nonprofit sector, and academic excellence.

“I am grateful and honored to be named a 2021 Truman Scholar. This is a monumental achievement for myself, my family, and my community,” Mendiola said. “I believe that public service is about bringing people together and working in the spirit of inafa’maolek — a lesson that our island and culture has instilled in me from a young age. I hope to inspire all of our people to dream big and take action.”

The 2021 scholars were selected from a record number of 845 applicants nominated by 328 colleges and universities.

“Kehani is a true inspiration to all of our young leaders and emblazons a profound message: Greatness starts with simply believing in yourself and sometimes just having the courage to try,” he said. “And, in daring to journey, you will then grow, discover, and dream in ways you never imagined.”

Mendiola is the 19th Truman Scholar to be named from the University of Guam and one of 3,384 total Truman Scholars named since the scholarship’s creation in 1975.

“Kehani is a perfect example of a student leader who aptly integrates her diverse academic pursuits with her campus and community involvements in ways that serve a higher purpose,” said Annette T. Santos, dean of UOG’s School of Business and Public Administration.

The University of Guam is one of 74 Truman Honor Institutions in the nation, a designation it earned in 2009 because of its dedication and successful track record to the Truman Foundation and the commitment of its young people in pursuit of careers in public service.

Past Truman Scholars from the University of Guam:

The official announcement can be viewed at https://www.truman.gov/. 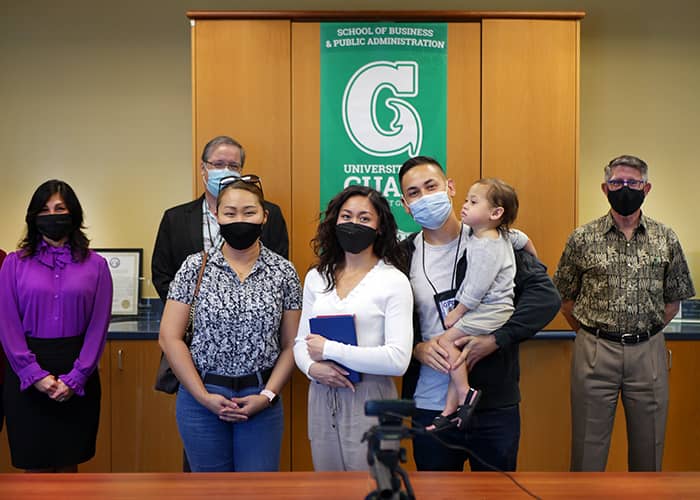 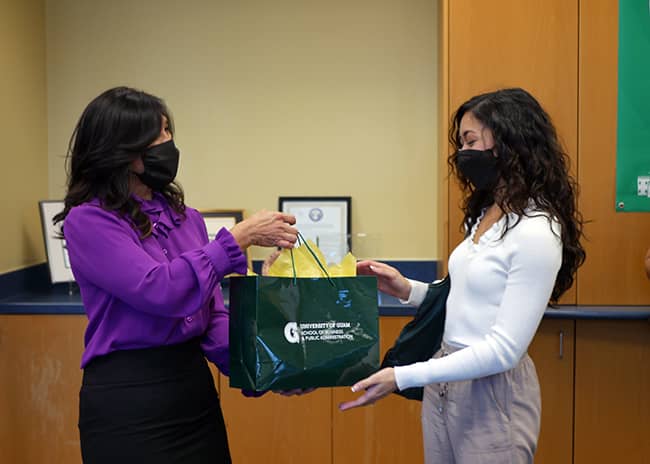 Dean Annette T. Santos of UOG’s School of Business and Public Administration, left, presents a gift to Kehani Mendiola, a public administration and criminal justice double major who was named one of 62 Truman Scholars in the nation for 2021. 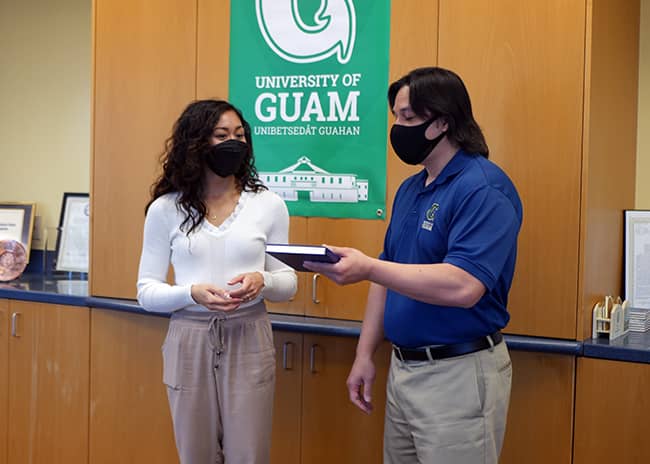