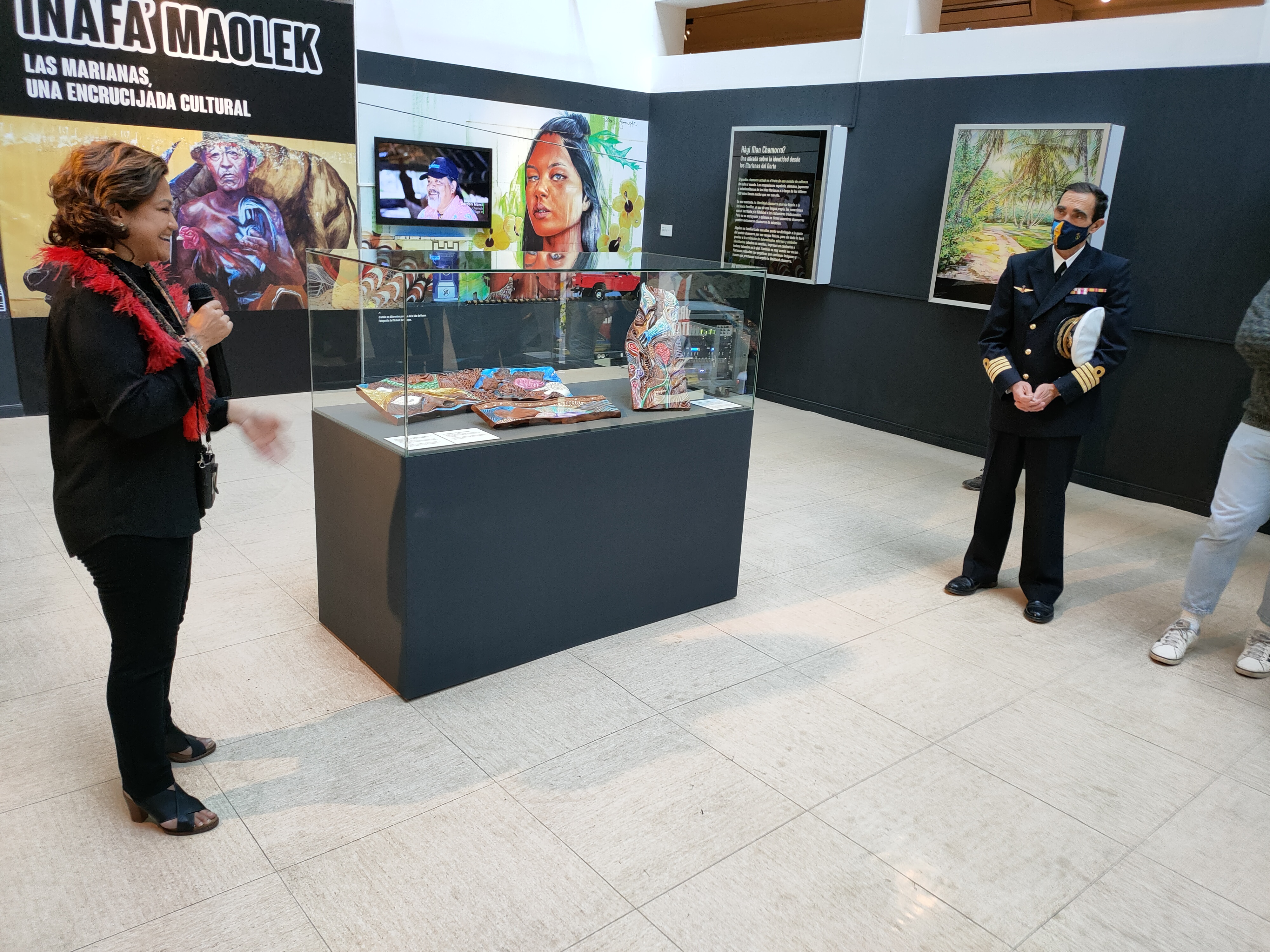 UOG Assistant Professor and artist Melissa Taitano explains her wood carvings on display at the Biba CHamoru exhibit, which opened on Nov. 17 at the Museo Nacional de Antropologia/National Museum of Anthropology in Madrid. 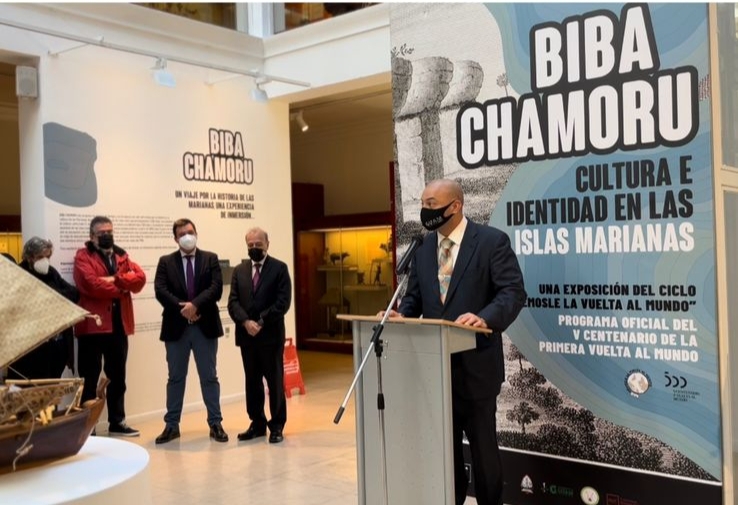 Adrian Cruz, chairperson of Guam’s I Estoria-ta Commission through the Office of the Governor of Guam, speaks at the opening of the Biba CHamoru exhibit on Nov. 17 in Madrid. 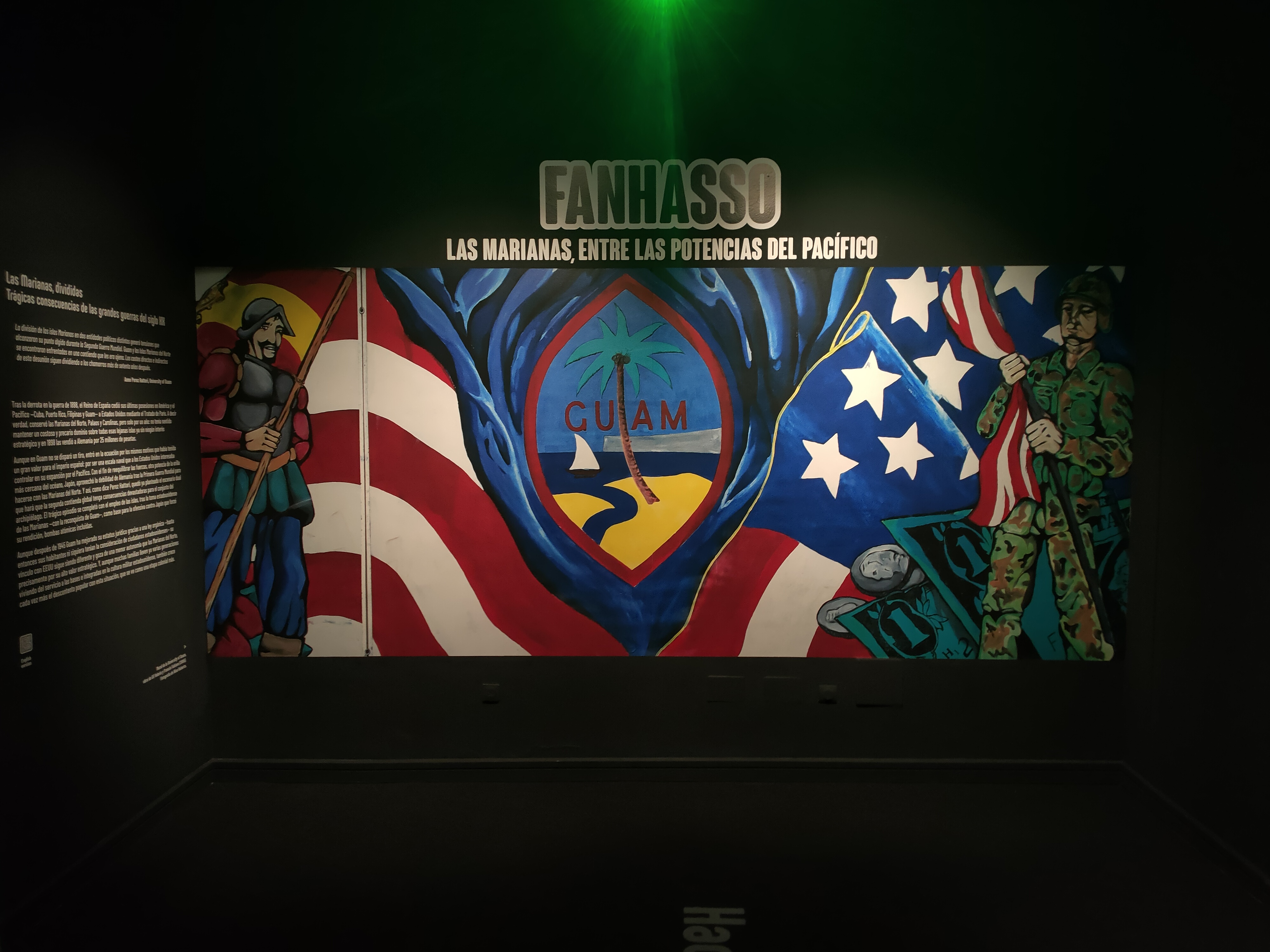 “Fanhasso,” one of six main areas of the Biba CHamoru exhibit at the Museo Nacional de Antropologia/National Museum of Anthropology in Madrid.
❮
❯

A newly opened exhibit titled "Biba CHamoru" at the Museo Nacional de Antropologia/National Museum of Anthropology in Madrid is showcasing the history and contemporary CHamoru culture of Guam and the Mariana Islands.

The initiative was spearheaded by the museum in Spain as part of the quincentennial commemoration of the first circumnavigation of the earth — the Magellan-Elcano expedition from Spain from 1519-1522 — in coordination with Carlos Madrid, director of research of the Micronesian Area Research Center at the University of Guam, and UOG faculty David Atienza and Melissa Taitano.

The exhibit, which is accompanied by a book titled “I Estoria-ta: Guam, the Mariana Islands, and Chamorro Culture,” offers a journey through the main historical periods of the Mariana Islands, then delves into the main identity traits and various contemporary artistic expressions of the CHamoru culture.

“We wanted to give international exposure to contemporary CHamoru artistic expressions and provide a platform for promotion of tourism, potential investments, and exchanges,” Madrid said.

Three wood carvings made by Taitano are centerpieces of the exhibit along with works by renowned artists Ric Castro and Sal Bidaure. High-resolution photographs taken by Michael Lujan Bevacqua, curator of the Guam Museum, show murals painted in different parts of Guam and original artifacts of Spanish collections. Local cultural agent Roman de la Cruz of Acho Marianas and Sandra Okada, executive director of Traditions Affirming Our Seafaring Ancestry, along with Guampedia, Raph Unpingco, and Mighty Island production company, among others, have materials exhibited as well.

“[The exhibition and the book] allow us to disembark in the Mariana Islands, to learn about their history and to become acquainted with their people, their identity, and their cultural diversity,” said Miquel Iceta i Llorens, minister of culture and sport for Spain, in the book’s foreword. “And they provide us with an opportunity to revise the version we have always taken for granted of the history of the archipelago.”

The initiative has been fully funded by the Spanish government through different institutions and universities. The exhibit will remain open until March 6.

Interested in sports, recreation, and fitness? Tune into the Triton Athletics video podcast!
Audition for the Latte Tones on Jan. 20!
Info webinar this Friday on the Knauss Fellowship for grad students