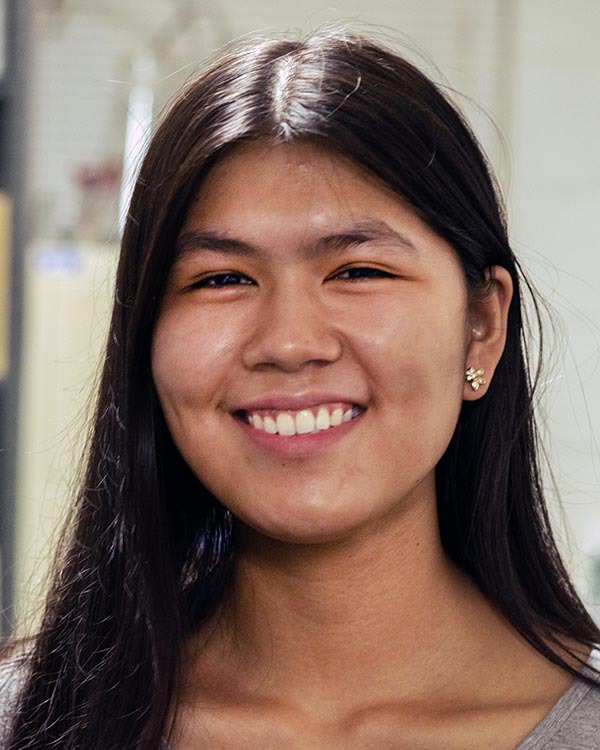 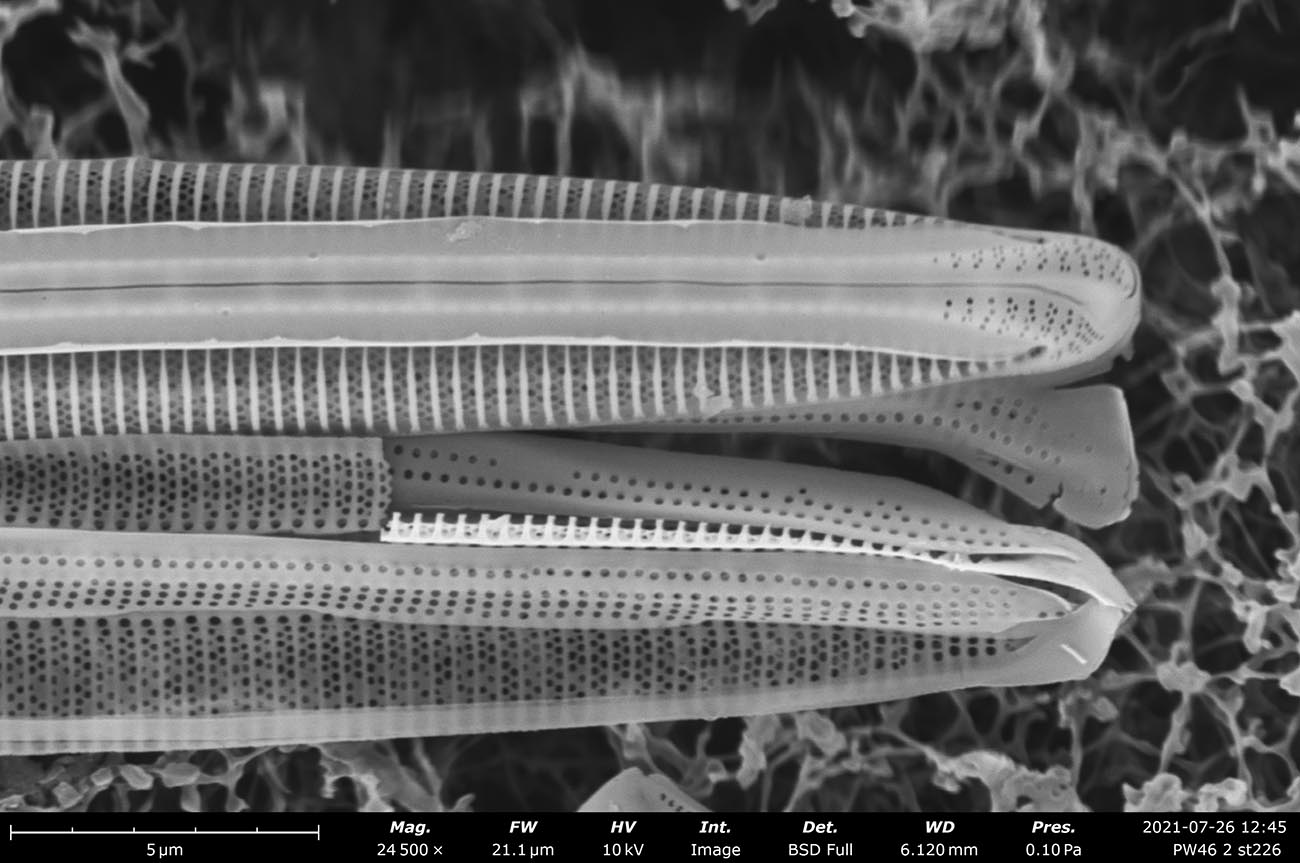 This potentially new diatom species discovered by University of Guam student Britney Sison will be named Nitzschia biseriata in reference to the double rows of pores on its body. The species will be officially considered new once a paper about the diatom has been peer-reviewed and approved for publication. Photo courtesy of Guam NSF EPSCoR and Christopher Lobban 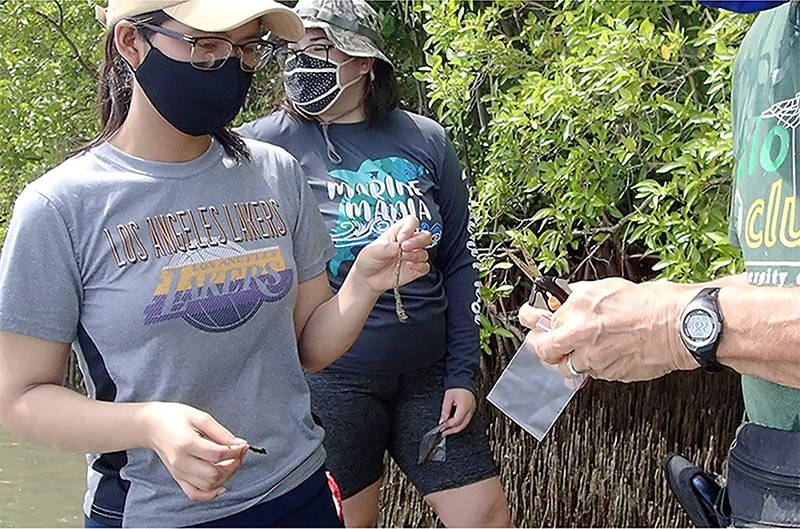 Britney Sison, left, and Gabriella Prelosky collect mud samples at Achang Bay mangrove in Guam with their research mentor, University of Guam Professor Emeritus of Biology Christopher Lobban. Both have discovered potentially new species while working as student research fellows under the NSF INCLUDES: SEAS Islands Alliance, a program administered at UOG through the Center for Island Sustainability and the Sea Grant program. Photo by Maria Schefter 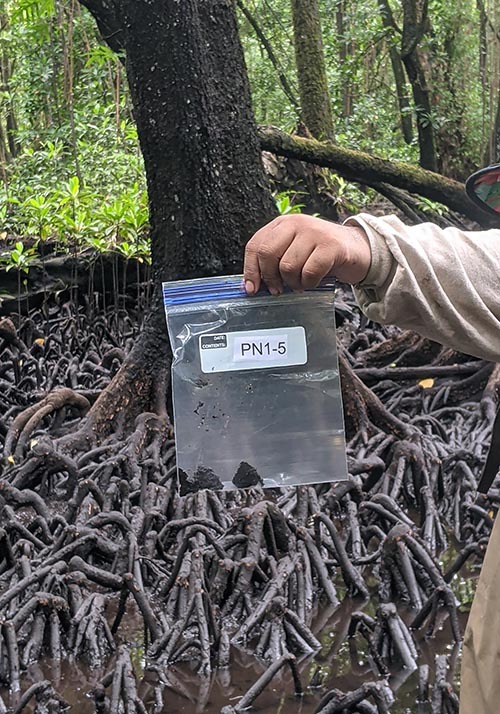 Marlin Lee Ling, a student intern of the NSF INCLUDES Bridge-to-Bachelor’s summer program through the College of Micronesia-FSM, photographs a mud sample next to the mangrove he collected it from in Pohnpei. Photo by Martin Lee Ling and courtesy of Guam NSF EPSCoR
❮
❯

Britney Sison, an undergraduate biology and chemistry student at the University of Guam, has discovered five potentially undocumented diatoms in mud samples from the Micronesian Islands of Palau, Yap, Pohnpei, and the Marshall Islands. Her discoveries are in addition to two potentially new diatom species found earlier this year by UOG student Gabriella Prelosky.

Diatoms are single-celled algae found in oceans, lakes, and rivers. They are primary producers in the food chain as photosynthetic organisms, according to UOG Professor Emeritus of Biology Christopher Lobban, who mentors Sison and Prelosky and runs the Microscopy Teaching & Research Laboratory on the UOG campus.

Sison’s discovery happened during her research fellowship under the NSF INCLUDES: SEAS Islands Alliance program, a $10 million initiative funded by the National Science Foundation to broaden participation in STEM fields of students in U.S. territories and affiliated islands.

She presented on her findings at the 26th International Diatom Symposium, which brought together hundreds of diatom researchers from around the world for the virtual event from Aug. 23 to 25 out of Yamagata, Japan. Her presentation, titled “New species of conopeate Nitzschia in the Pacific Islands,” won third place in the student poster competition.

The species Sison focused on in her presentation were just five of many potentially new species of diatoms she found while examining microbial mat and mud samples.

Diatom samples from Palau, Yap, Pohnpei, and the Marshall Islands were collected and mailed to the UOG lab by interns in the 2021 NSF INCLUDES Bridge-to-Bachelor’s summer program: Kebang Ngiraklang, a student at the Palau Community College under the mentorship of Vernice Yuki, and Iverson Aliven and Marlin Lee Ling, from the College of Micronesia-FSM under the mentorship of Brian Lynch.

Using the laboratory’s new Scanning Electron Microscope, which was funded by the university’s Guam NSF EPSCoR grant, Sison and Lobban were able to examine the samples intensively.

“It’s been really interesting to study diatoms,” Sison said. “In the words of Dr. Lobban, it’s like an adult treasure hunt. You never know what you’ll find.”

Sison is now in the process of naming the potentially new species. One of them will be named Nitzschia biseriata because of its unique characteristic of having double rows of pores on its body instead of one.

“‘Two rows’ translated into Latin is ‘biseriate,’” Lobban said. “If there’s an obvious characteristic like that, it’s useful to name it that way because then it will tell people something about the species.”

Sison’s findings will officially be new species once a paper about the diatoms has been peer-reviewed and approved for publication.

Both Sison and Prelosky will present more complete results of their research at the 2021 National Diversity in STEM Digital Conference held by the Society for the Advancement of Chicanos/Hispanics and Native Americans in Science from Oct. 25–29.

The NSF INCLUDES: SEAS Islands Alliance is administered by the UOG Center for Island Sustainability and Sea Grant programs in partnership with the School of Education at the University of Guam. UOG faculty members Austin Shelton, Cheryl Sangueza, and Else Demeulenaere serve as investigators of the grant award. NSF INCLUDES collaborates closely with the Guam NSF EPSCoR program, also funded by the National Science Foundation.