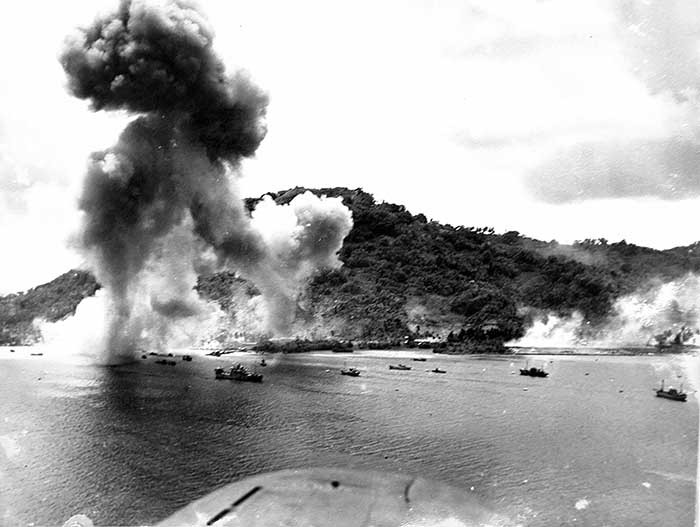 A 1944 photo of the American bombing of Tonoas in Chuuk, which was considered by the Americans as payback for the Japanese bombing of Pearl Harbor. The 50–60 sunken ships that resulted from the bombing are now known as the “Truk Lagoon Underwater Fleet” and have been on the National Register of Historic Places since 1976. It is one of two sites in Federated States of Micronesia dedicated as a U.S. National Historic Landmark (1985). Photo credit: National Archives 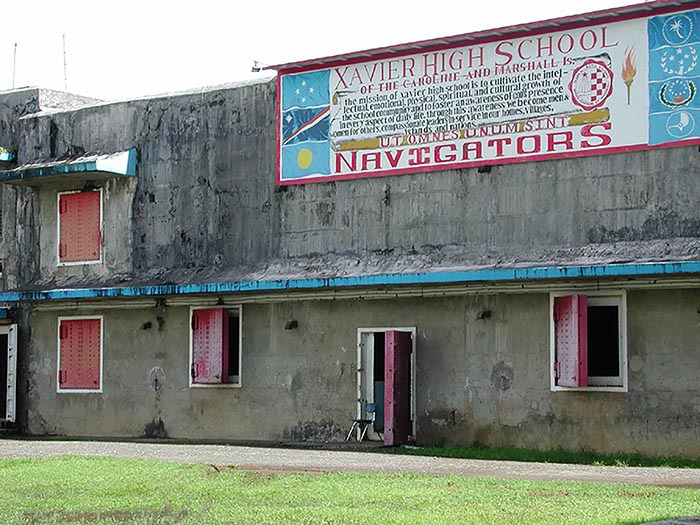 The present-day Xavier High School on the Chuukese island of Weno was originally the Japanese Navy radio transmitting station during World War II. Terrestrial sites such as this one will be a major focus of a project to preserve the holistic heritage of World War II in Chuuk being carried out by University of Guam researchers. Photo credit: William Jeffery 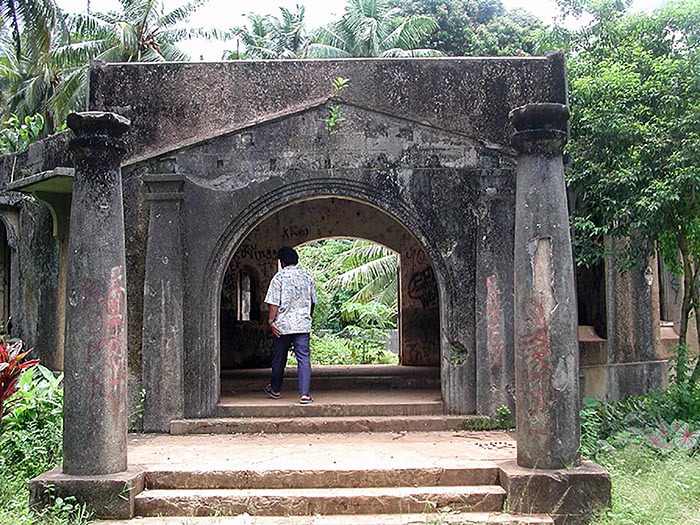 A photo from 2002 shows remnants of a Chuukese civilian hospital during World War II, which still stands today on the island of Tonoas in Chuuk. Terrestrial sites such as this one will be a major focus of a project to preserve the holistic heritage of World War II in Chuuk being carried out by University of Guam researchers. Photo credit: William Jeffery
❮
❯

A University of Guam team led by Associate Professor William Jeffery has received grant funding to identify, survey, and help preserve the less-documented World War II sites, including three unlocated shipwrecks, in Chuuk — the Micronesian island the Americans attacked in 1944 in retaliation for the Japanese attacks on Pearl Harbor.

As a public-impact research project, it aims to document Chuuk’s World War II heritage more holistically for purposes of historical preservation, interpretation by future researchers, and a broader public appreciation of the Chuukese experiences during World War II.

The funding is a $150,000 grant from the American Battlefield Protection Program of the U.S. National Park Service.

One focus of the project will be terrestrial surveys on the island Tonoas.

“While Chuuk’s underwater cultural heritage sites are locally, regionally, and internationally well-known from a tourist perspective, the terrestrial sites and living heritage are not,” Jeffery said.

Tonoas housed the Japanese headquarters and the greatest concentration of buildings in Chuuk when the Americans attacked.

Through site surveys and oral history surveys with the residents of Tonoas, the researchers will identify and interpret underrepresented terrestrial sites, such as those where U.S. military personnel were imprisoned and facilities used by the Japanese commander-in-chief. It will also include Chuukese traditional indigenous heritage impacted by the war.

Recording the natural heritage of shipwrecks for future preservation

The project will also explore the less-documented aspects of shipwrecks from the war.

Chuuk Lagoon, also known as Truk Lagoon, was bombed over an 18-month period sinking 50–60 major ships and killing more than 5,000 Japanese and 1,000 Chuukese. At one stage the United States considered dropping an atomic bomb in Chuuk, but this never eventuated.

While the shipwrecks have been documented as far as the ships’ structure and remaining cargo, the project will record their “natural heritage” — the flora and fauna that is “known to be of great value and importance for tourist divers,” Jeffery said. This will help determine what management, preservation practices, and future research are required for the sites to have a lasting public impact.

Lastly, the sites of three shipwrecks that are documented in the U.S. National Archives but have not been found will be surveyed as to their nature and condition. Using photogrammetry techniques, the researchers will produce 3D models, which will facilitate the identification and interpretation of the wrecks.

The research team — consisting of Jeffery, a maritime archaeologist, and UOG Associate Professors David Atienza, an ethnographer and linguistic anthropologist, Peter Houk, a marine biologist, and members of the Chuukese community — will commence the project in January 2022, if pandemic restrictions allow, and fieldwork in May 2022. They expect to complete the project in 2023.

Their work will ultimately be shared in a technical report, maps, and still imagery to be used in tourist signage and brochures and in training programs for local tour guides and historic preservation staff. Detailed maps will also be available on the Blue Lagoon Dive Resort website.