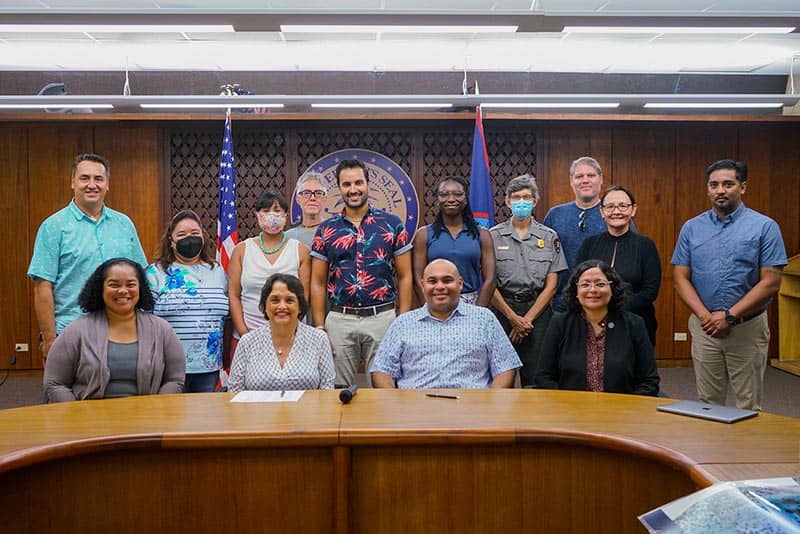 Inventor of next-generation sensing technologies Ved Chirayath, standing center, stands with local scientists, natural resource managers, and government officials, including Gov. Lou Leon Guerrero, on June 20, 2022, at the Governor’s Complex following his presentation on a joint 3D coral reef mapping project he is conducting with UOG. Photo courtesy of the Office of the Governor 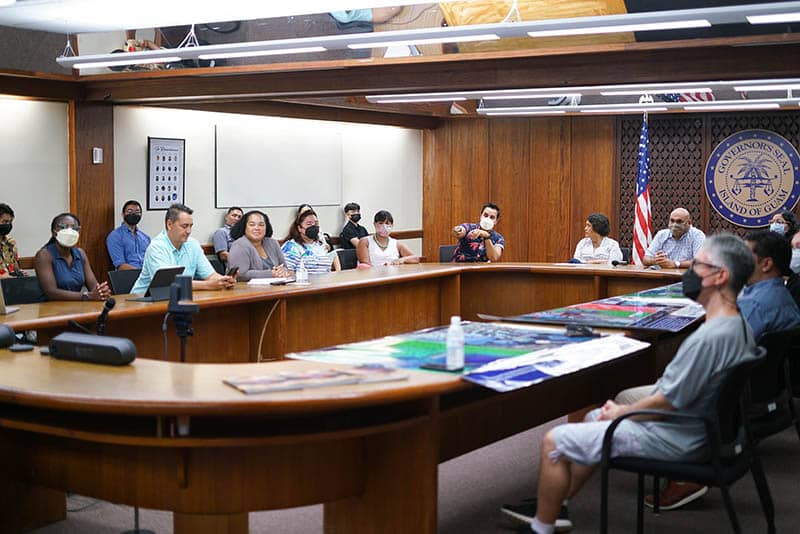 Ved Chirayath presents on the 3D reef-mapping project on June 20, 2022, at the Governor’s Complex. Photo courtesy of the Office of the Governor 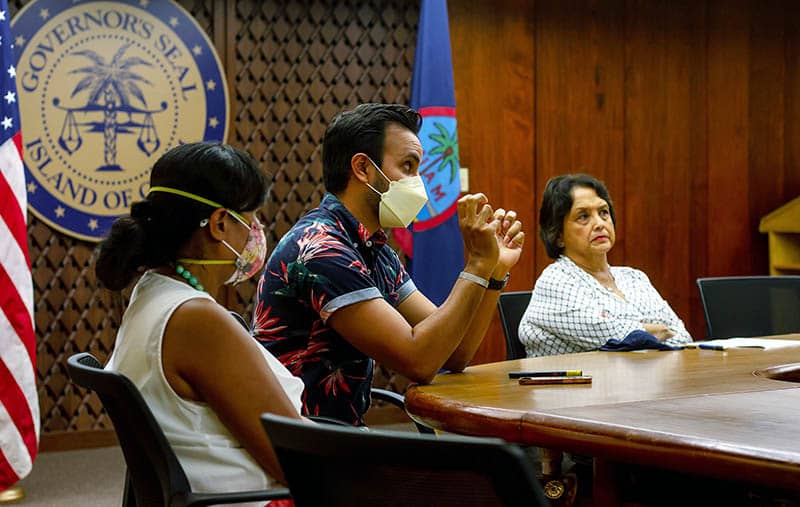 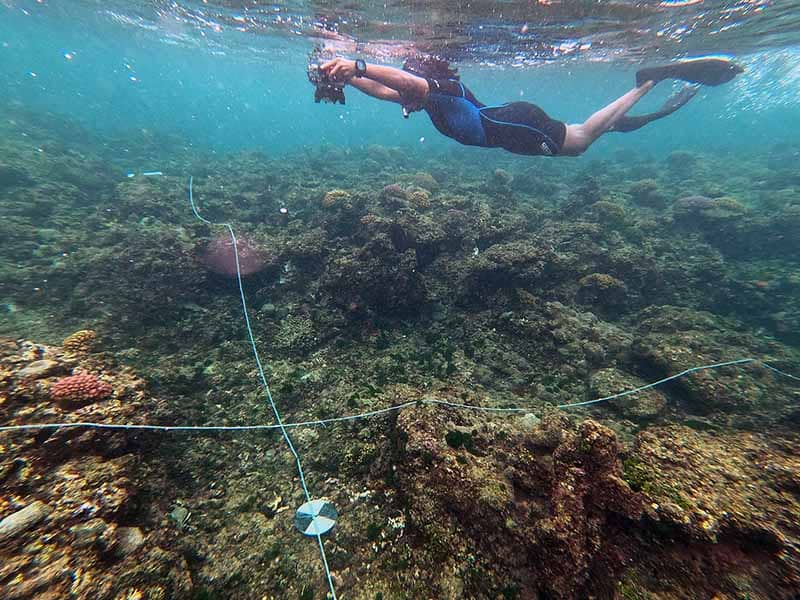 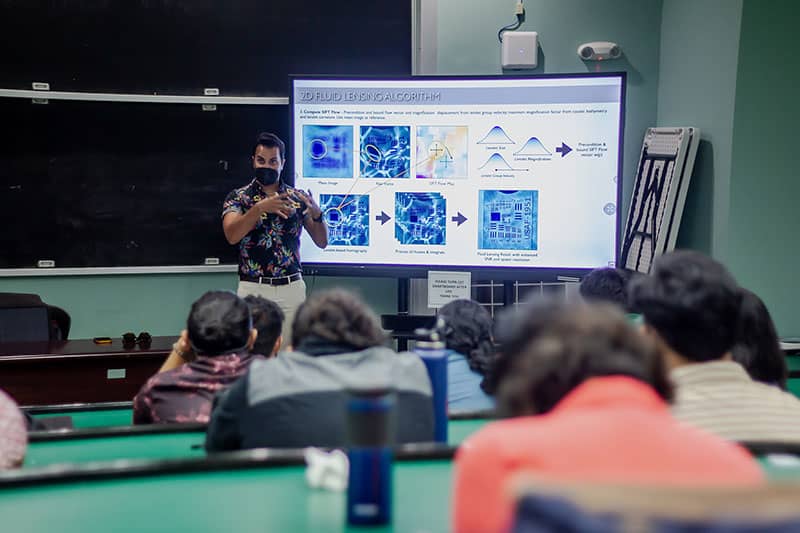 Ved Chirayath presents to summer math research program students on June 17, 2022, at the University of Guam about the “fluid lensing” remote sensing technology he invented and is now using to create 3D maps of Guam’s coral reefs. The project places Guam at the global forefront for having the highest resolution and most accurate maps of its coral reefs.
❮
❯

With much of Guam’s marine habitats unmapped and unseen by many, one ambitious project is using NASA technology to create 3D maps and reveal what lies beneath the surface. The project has placed Guam at the global forefront for having the highest resolution and most accurate coral reef maps in the world.

The products from this mission will highlight critical information that will help natural resource managers assess the overall health of the reefs — such as the rate of bleaching events, the success of coral restoration over a period of time, and how reef structures are affected by climate change and human activity.

“This unprecedented precision mapping is made possible through ‘fluid lensing,’ which I developed that cuts through the distortion of ocean waves and provides clear images of shallow marine habitats from above,” said Chirayath, who invented the fluid lensing remote sensing technology while obtaining his doctorate in aeronautics and astronautics at Stanford University. “With this technology, we can build upon what we know about Guam’s reefs through a new perspective and provide technical assistance to the managers who help protect them.”

Chirayath was previously the director of the NASA Ames Research Center Laboratory for Advanced Sensing and now works at the University of Miami's Rosenstiel School of Marine & Atmospheric Science as the endowed G. Unger Vetlesen Professor of Earth Sciences, the director of the Aircraft Center for Earth Studies (ACES), and a National Geographic explorer.

From May 21 to June 20, Chirayath and King led a team of drone pilots and volunteer free divers to collect photogrammetry data from three of Guam’s marine preserves — Tumon Bay, Piti Bomb Holes, and the Achang Reef Flat — and other sites of interest, like Sharks Cove and Ague Cove. This year’s field campaign was the second phase of the 3D reef-mapping project, following the first phase in 2019.

The collected imagery will later be processed and rendered to create the high-accuracy maps, which are also able to show some of the sea creatures that dwell in those habitats.

“We were able to map more than we initially planned for this particular field campaign, which we are proud of,” King said. “This work has not only been a service to our coastal reef ecosystems, but also to local capacity-building. By training more drone pilots, we will be able to do more of these excursions and eventually map most of Guam’s coastal marine habitats. We are grateful to Dr. Chirayath for lending his resources to provide much-needed data for our island community.”

King, who holds a doctorate in geography and is an associate professor of geography at the University of Guam, is the UOG lead for the Pacific Islands Climate Adaptation Science Center and the associate director of NASA Guam Space Grant at UOG.

Distributing the data and information

The team has conducted outreach at various educational levels to share the significance of this project. Joined by Field Campaign Manager and University of Miami graduate student Stephanie Wright, Chirayath shared highlights of the project to middle school, high school, and college undergraduate students.

"Our coral reef ecosystems feed and protect our island community as well as support our economies,” said Gov. Lourdes Leon Guerrero. “In return, we must do what we can to preserve them. I am hopeful that the products that come out of this project will be instrumental in managing our coral reefs and determining the best courses of action for preventing or mitigating any harm that comes to them.”

Lt. Gov. Joshua Tenorio added, "The technology used in this project will surely boost our understanding of our reefs and emphasize areas of concern in our surrounding waters. I am interested in seeing these processes blossom among our island community. We are thankful to Dr. Chirayath and Dr. King for spearheading this project and their passion to be good stewards of our ocean."

The project is primarily funded through a grant from the Department of the Interior Coral Reef Initiative and administrated by the Guam Bureau of Statistics & Plans. Other funders and partners include NASA, the University of Guam, the University of Miami, the Guam Department of Agriculture, the PI-CASC, NASA Guam EPSCoR, NASA Guam Space Grant, and the National Park Service.

Chelsa Muña-Brecht, director of the Guam Department of Agriculture and manager of the DOI grant, said the agency is excited for the outcomes of the project and its ability to show a new perspective of Guam’s reefs.

"The products from this project will prove to be a vital resource for our local community-based management and coral reef habitat restoration work,” she said.