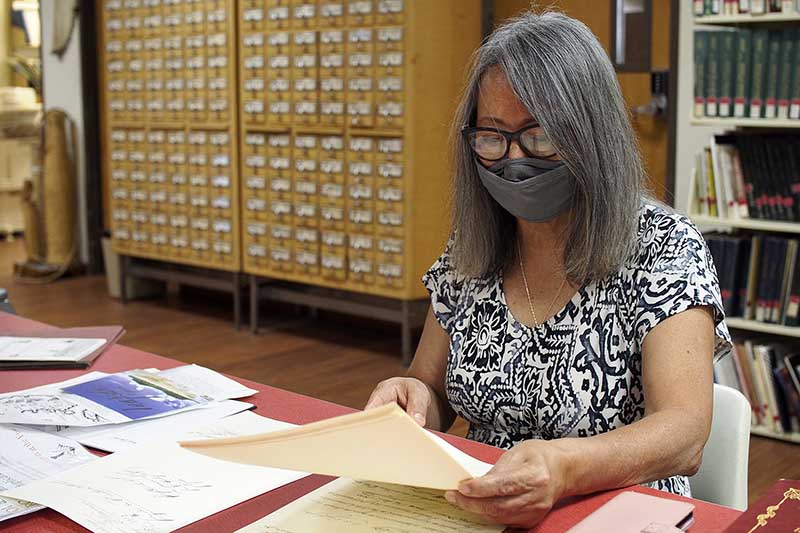 Debbie Torres looks through copies of documents related to her family’s property in the Micronesian Area Research Center. Torres has been visiting MARC since 2011 and has been able to create a timeline of her family’s Jinapsan property dating back to the late 1600s. 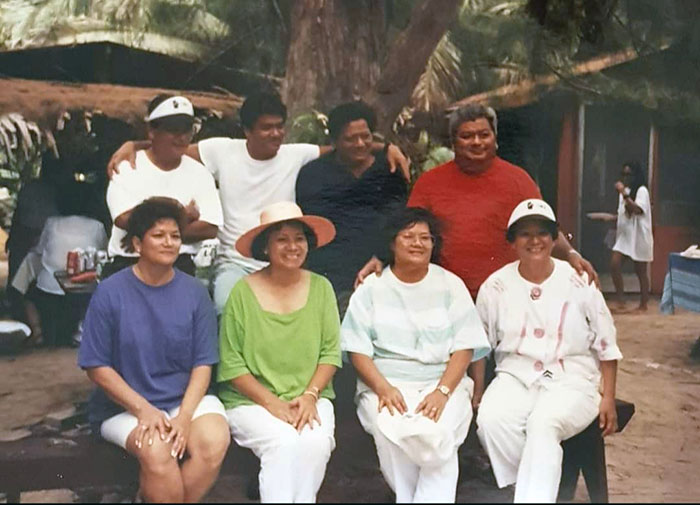 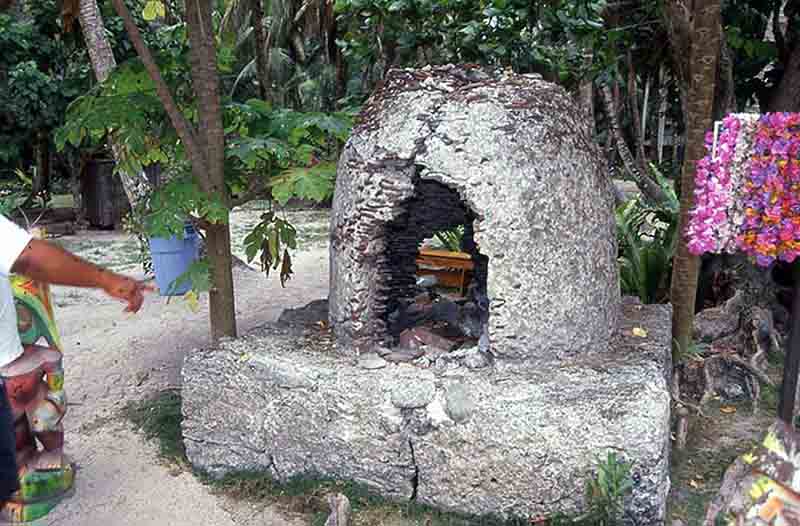 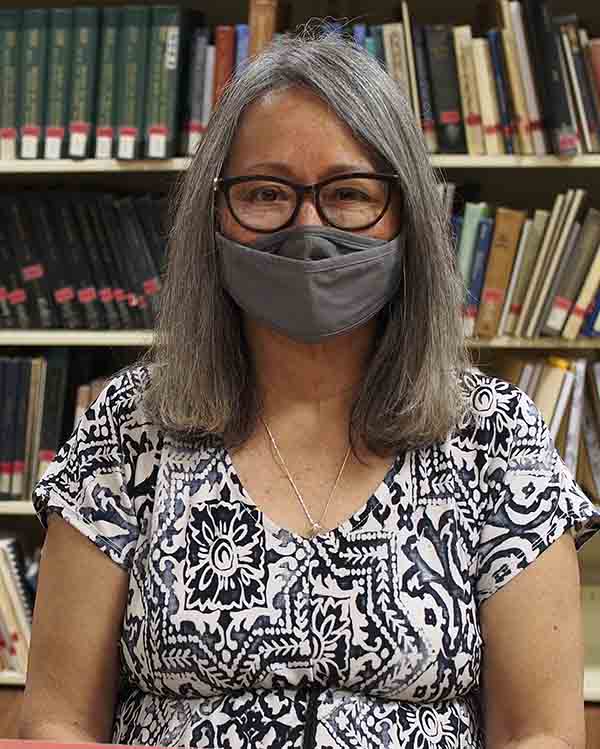 “I’ve been told I have an insatiable curiosity — to want to know things,” Debbie Torres says, leafing through her tabloid-size copies of old Spanish land documents in the Richard F. Taitano Micronesian Area Research Center at the University of Guam in Mangilao.

The 65-year-old Torres has been visiting MARC since 2011, examining its collections of documents, maps, photographs, and manuscripts and tracing her family history back through the generations.

Her first visits, however, were focused specifically on her family’s Jinapsan property between Ritidian and Tarague beaches in northern Guam.

“I wanted to find out more about the property,” Torres says. “The genealogy I wasn’t into — I just wanted to know about the land, how we got connected with it. Where did it all begin? Did ‘Jinapsan’ exist? Who settled it? That’s what I wanted to know.”

She says it was great to have stories from her family of the property and how it had been passed down, but she eventually decided to look for more tangible evidence.

“I needed facts to back up the stories, and this was the recommended place to find those facts,” she says. “It’s the only way for me that I could paint a picture of my family’s Jinapsan history — you know, by validating the stories I’ve been told with the facts I find.”

What’s in a name?

Torres says she began her search for those facts more than 10 years ago with the help of Omaira Brunal-Perry.

“She came in kind of curious, to see if we had any documentation on the land,” says Brunal-Perry, an associate professor of Spanish legal historiography and curator of the Spanish Documents Collection and the Manuscripts Collection at MARC.

Brunal-Perry asked for the name of Torres’ grandfather, or even his father.

“I said, ‘We’ll look into the database and see if we have that name,” Brunal-Perry says, and there they found Torres’s great-grandfather, Santiago Castro y Ojeda.

“The documents are in Spanish, so I did a verbatim translation for her,” Brunal-Perry says. “She was fascinated to discover [it]. That was a big satisfaction for me, too. You know, we process these documents, we care for the documents, but we want to have the connection of the people with the documents and for them to understand their value.”

Torres says she became “emotional” upon viewing those first records relating to her great-grandfather.

“It was the petition to own Jinapsan that was made by my great-grandfather, and it was dated 1897,” she says. 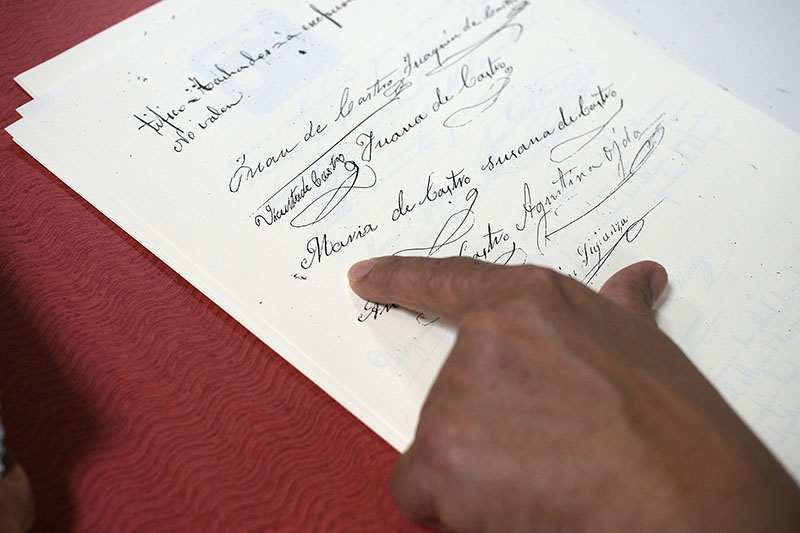 Debbie Torres points to the signature of her great-grandfather’s sister, Maria de Castro y Ojeda, on a document from 1895 petitioning for the title for her family’s present-day property on the northern coast of Guam. The signatures of three Spanish governors of Guam are also on the document.

The documents were from the Spanish Court of First Instance in the Mariana Islands.

“This is the information and the testimony of Don (Mr.) Santiago de Castro y Ojeda,” Torres says, reading from her copy of the document.

Her voice cracks as she describes what she felt looking through the records, reading her great-grandfather’s testimony in his petition to officially own the property, and seeing the signatures of his own relatives who served as witnesses.

“The nice thing about this whole thing, this document, is that the testimony was written and stated everything he stated, which gave me an insight into my great-grandfather. I’m closer to him, through this document. … Through this, I told my mom, I feel like I know him more. I feel close to him.”

Through the information she’s collected on her visits to MARC over the years, Torres has been able to create a timeline of her family’s Jinapsan property dating back to the late 1600s. She has also created a more detailed family tree as she finds previously unknown names in the records.

Torres is now looking into the origins of the Jinapsan name itself — which over the years has also been spelled as Inapsan, Hinapsan, and Ginapsan.

MARC: Historical documents at your fingertips

“Most of the history of Guam today is known because of the translations of these primary sources,” says Brunal-Perry, who has worked at MARC for more than three decades. “Here we have been working since the foundation of MARC in 1967 in collecting the documents pertaining to this specific area.”

Much of the documents in MARC’s collections have been gathered here from archival facilities around the world “for the convenience of the people of Guam,” she says.

“So the major value of these collections — all these materials are here at the tip of your fingers.” 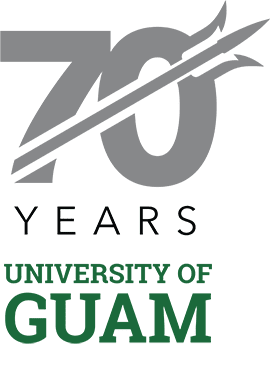 The month of March is focused on the University's impact on Micronesian history and culture. Stay posted on all University of Guam 70th Anniversary events and stories at www.uog.edu/70th-anniversary.