Matthew Mills is a research associate at the University of Guam Marine Laboratory. Mills worked on the Ramicrusta study as part of his master’s thesis. 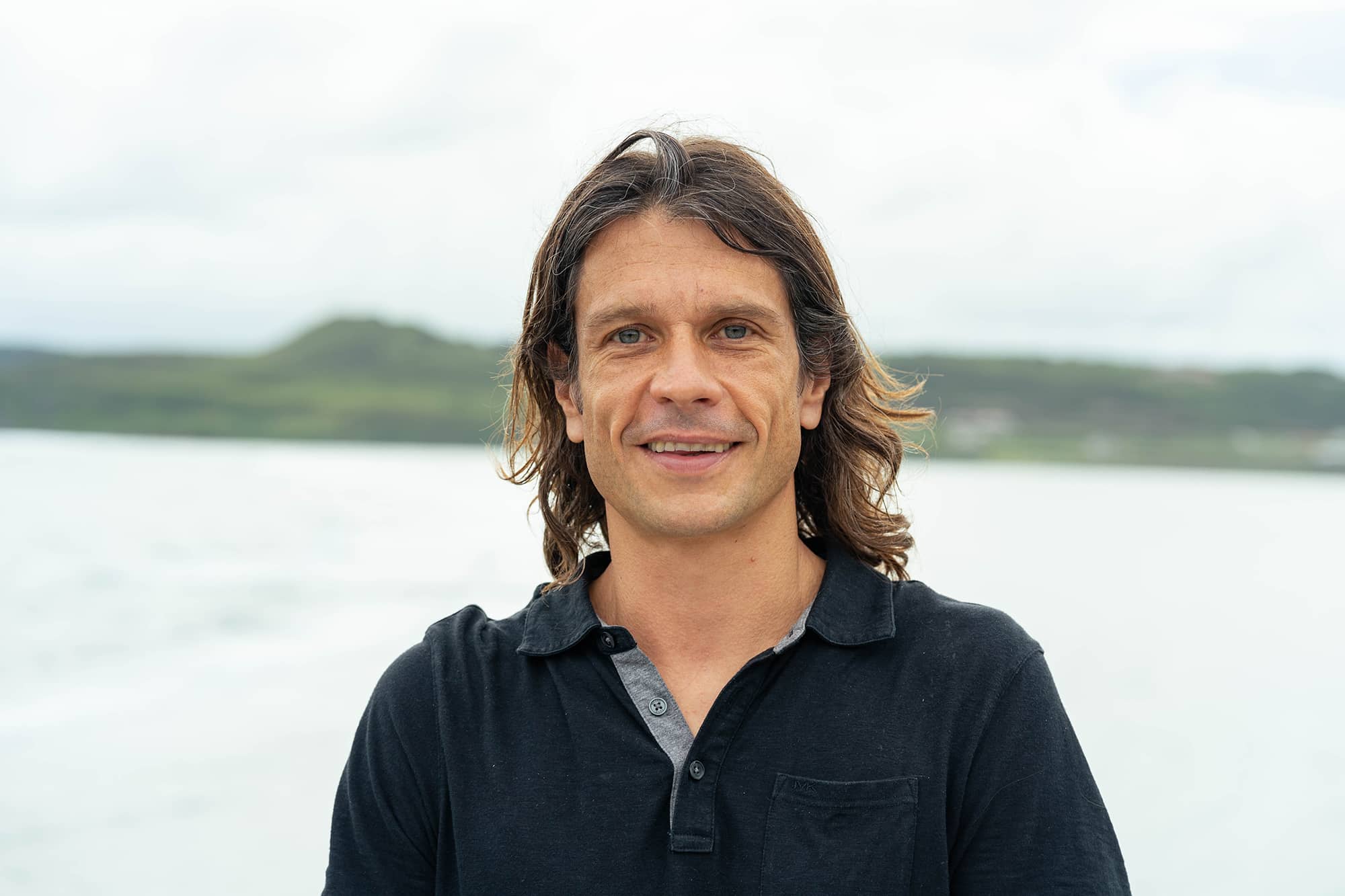 Tom Schils is a professor at the University of Guam Marine Laboratory whose research interests focus on the unique biodiversity and ecology of tropical seaweeds in the Mariana Islands. 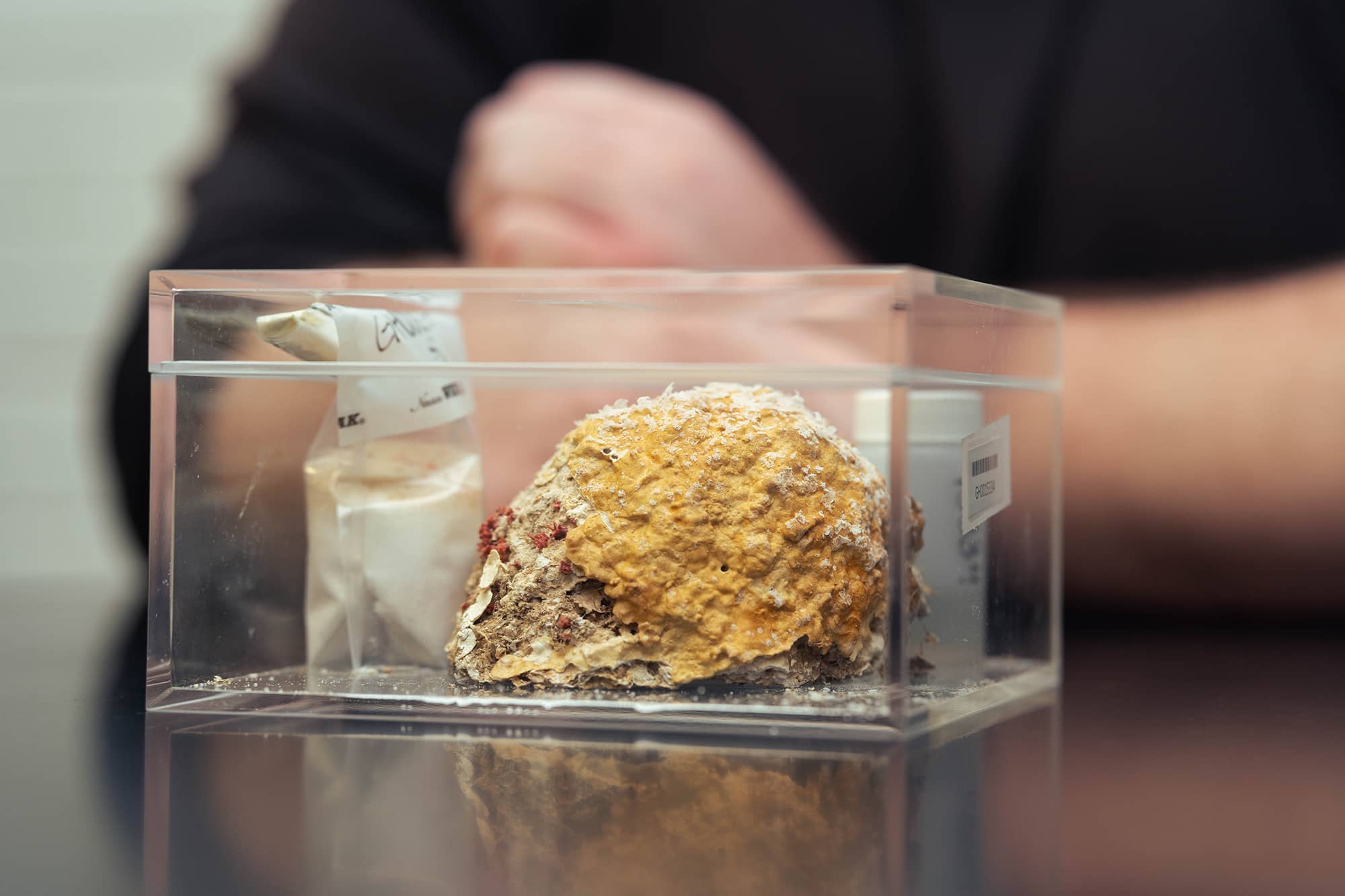 Ramicrusta adjoulanensis is a species of algae newly discovered by University of Guam Marine Lab researchers. They named it after Adjoulan Point, which is located at the mouth of Talo’fo’fo Bay in Guam.
❮
❯

University of Guam researchers have discovered four new species of Crustose Calcifying Red Algae (CCRA), a group of marine algae that deposits limestone-like stony corals. The discoveries, made official by the publication of their research in November in the peer-reviewed journal PLOS ONE, make Guam equal to Vanuatu in the highest documented diversity in the world of the CCRA species known as Ramicrusta.

CCRA are a dominant and diverse group of organisms on Guam’s reefs that are difficult to identify and have sometimes been mistaken for coral. They serve several important ecological functions on reefs, such as building and cementing reefs together or serving as the preferred settlement substrates for coral larvae, which then further develop into adult colonies.

“Given their ecological importance, we decided to investigate them in detail,” said lead author Matthew S. Mills, a UOG alum who is now a research associate in the UOG Marine Laboratory.

Since 2017, more than 500 CCRA specimens have been collected from numerous sites around the island. Included in those specimens are six species of red algae belonging to the genus Ramicrusta, four of which are new to science.

Mills and his co-author on the research — Tom Schils, a UOG professor of marine biology — named the four new CCRA species after the CHamoru names of their collection sites.

Two of the new species were found in Pago Bay. They were named Ramicrusta taogamensis — after Taogam Point, which delineates the northern boundary of Pago Bay — and Ramicrusta labtasiensis, whichwas collected from the seawater intake channel behind the UOG Marine Laboratory and named in recognition of the lab’s 50th anniversary last year.

“Most of the anniversary celebration events were canceled because of the pandemic, so we thought it was fitting to name this new species after the Marine Laboratory for all the important biodiversity work that has been conducted at the unit since its founding in 1970,” Schils said.

“This species is a common alga at this popular beach in Ipan,” Schils said. “As a seaweed biologist, I had always been bothered that I could not identify this alga from a beach that we visited often with the family. Now, we have finally resolved that this is a new species of a genus that had previously not been reported for Micronesia.”

Mills and Schils are working on a larger diversity assessment of CCRA from Guam.

“Before we started our studies, the only in-depth survey of CCRA on Guam was done in 1975,” Mills said.

Schils added, “CCRA play an important role in the community changes that we are witnessing on Guam’s reefs. Resolving the diversity of this group is a first step in understanding their contribution to reef health.”

The study was funded by the university’s National Science Foundation EPSCoR grant.