A survey of University of Guam alumni shows that UOG graduates gain various professional advantages after earning their degrees. According to 1,350 alumni surveyed in 2020, the majority say their degree has led to increased employment and promotion opportunities, feeling well-prepared in their job or career, and higher annual earnings.

“This survey sheds light on the undeniable benefits of earning a degree from the University of Guam,” said Maria Claret M. Ruane, a professor of economics at UOG who led the study through the UOG School of Business and Public Administration.

Conducted between Feb. 19 and March 20, 2020, the survey sought information from alumni on their perceived usefulness and value of their degree. Its questions were largely patterned after a 2014 Pew Research study titled “The Rising Cost of Not Going to College.”

The report noted increased employment opportunities for alumni, including getting promoted and finding employment.

Most of the respondents held jobs while earning their degrees, and of those who did, 84% of undergraduates and 61.2% of graduates (Table 7) saw promotions with their current employer or took jobs with new employers as a result of their degree, resulting in up to $15,000 higher earnings compared to before their degree.

Of those who weren’t employed over the course of their degree, the majority found work within three months of graduating (Table 6).

“The earning potential is clear, but UOG alumni also felt strongly about the non-monetary benefits, such as enjoying an overall better quality of life and being able to be a better role model,” Ruane said.

Prepared for the workforce

The alumni surveyed reported feeling prepared for the workforce and finding a meaningful career path.

More than 90% of respondents reported that their UOG degree is useful in their current job or career (Table 9), with the same percentage saying their degree provided them with the right qualifications or higher qualifications than are required in their jobs (Table 12). Furthermore, 86% reported that their academic major is closely related to the work they’re doing now (Table 13).

The survey also asked respondents about their student loan debt, revealing that one-third of undergraduate students and nearly half of graduate students who responded did not borrow any money to pay for their degree (Table 17). Of those who did, the amounts borrowed ranged between $10,000 and $14,000.

“This study underscores the impact UOG has on students’ social mobility,” said UOG President Thomas W. Krise. “We hope the positive feedback of our graduates in this report will encourage more of our region’s young adults to invest in their future by attending UOG.”

The University of Guam was recently named a “Top Performer on Social Mobility” by U.S. News and World Report for the second straight year, recognizing the high number of Pell grant recipients, or low-income students, who complete their degrees at UOG. 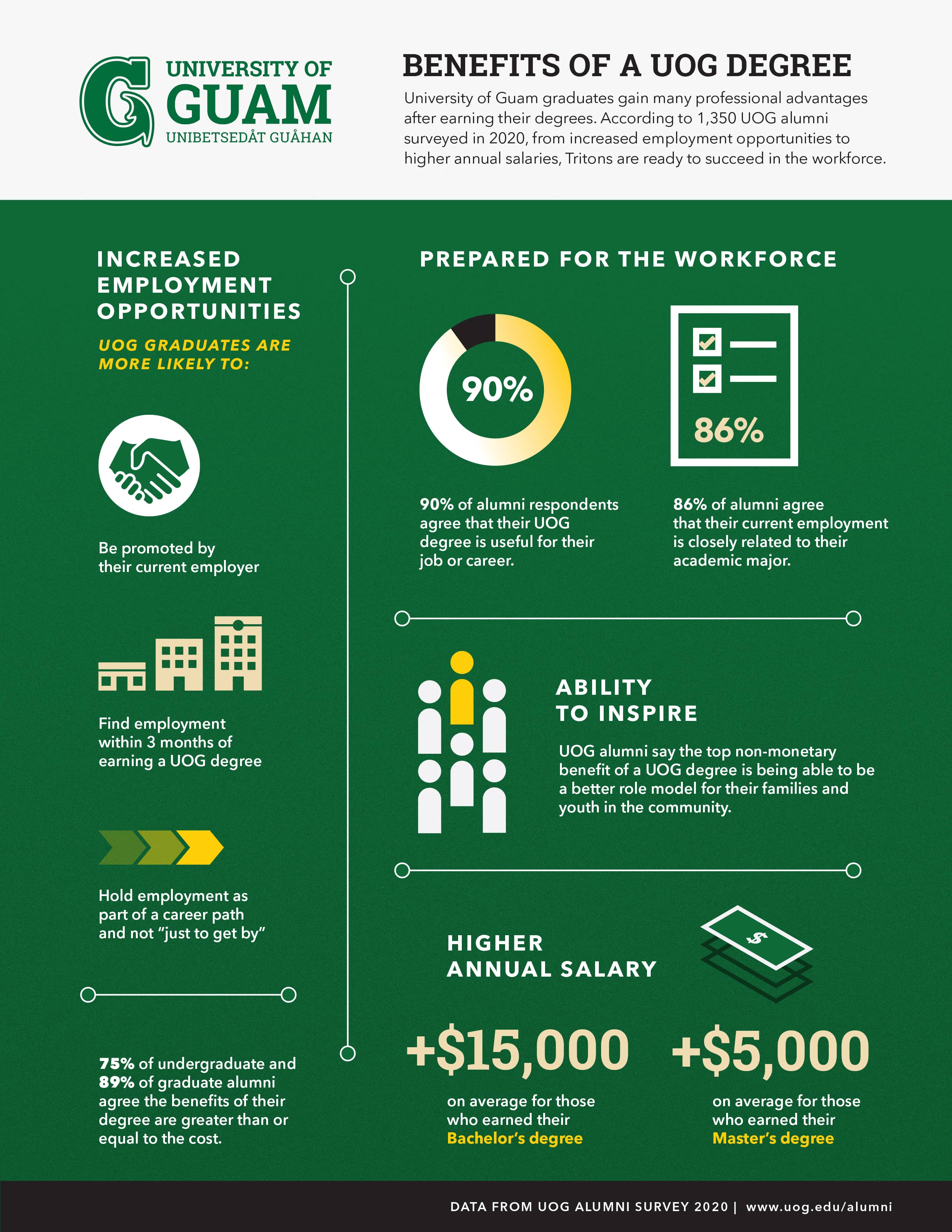