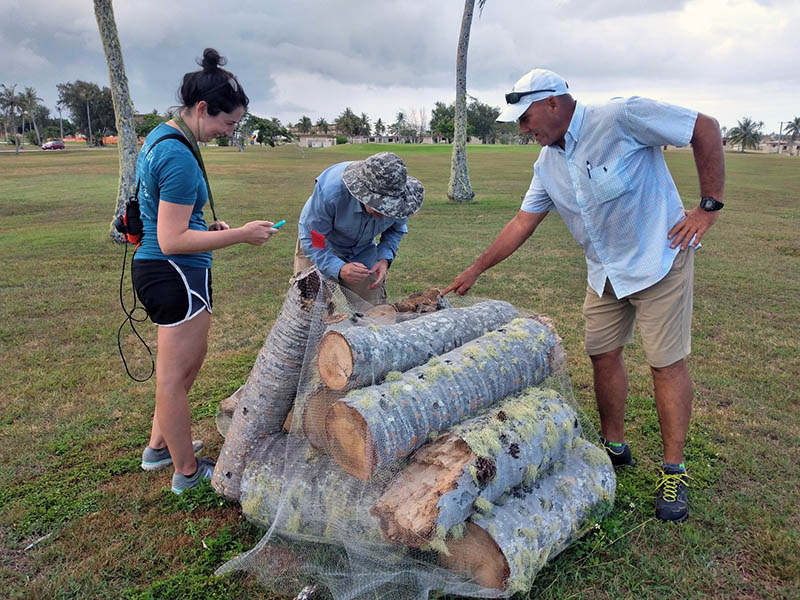 Superintendent Russell Young of the Palm Tree Golf Course on Andersen Air Force Base points to rhino beetles trapped in tekken netting wrapped around decaying tree trunks in April 2021. With the support of UOG extension agents, he has been successful using the method to attract, capture, and slow the spread of the beetle on the golf course. Photo courtesy of Palm Tree Golf Course 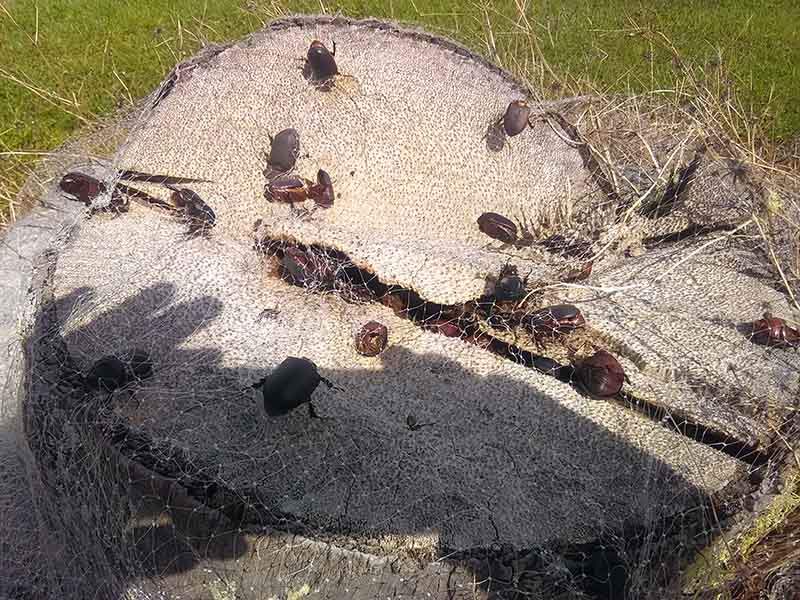 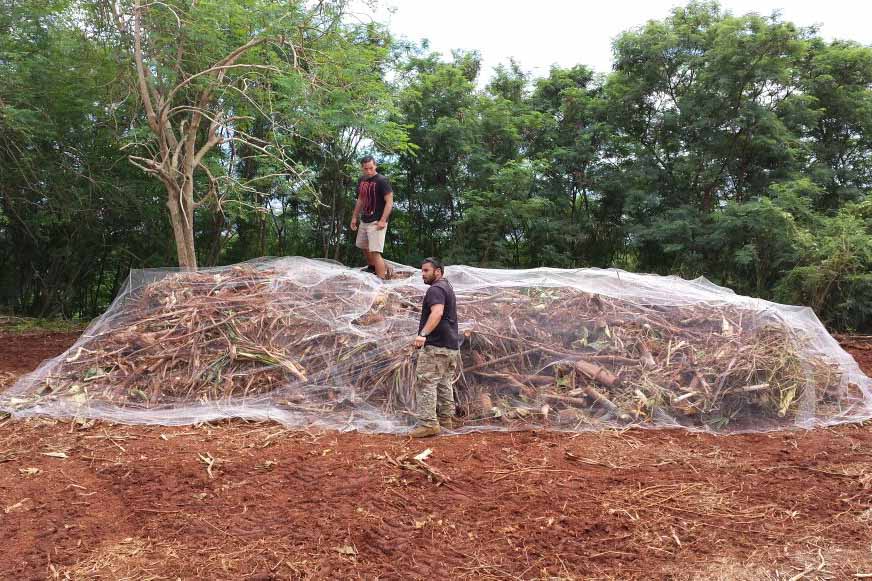 Russell F. Young, superintendent of Palm Tree Golf Course on Andersen Air Force Base, was one of four recipients to receive a 2022 Environmental Leaders in Golf Award on Oct. 27 from the Golf Course Superintendents Association of America for his success in using the technique.

“We had a problem where we were losing palm trees like crazy,” Young said.

The coconut rhinoceros beetle, an invasive species in Guam, has decimated coconut palms island-wide. The adult beetles bore into the crowns of coconut palms to feed on sap. The Andersen golf course has lost around 300 palms to date.

Young had noticed some people on island were using netting to trap the beetles, so he reached out to UOG Extension Agents Roland Quitugua and Aubrey Moore, who specialize in invasive species.

Quitugua and Moore got the idea of using netting to trap the beetles from the Hawaii Department of Agriculture in Hawaii in 2014, shortly after the beetle was discovered in Oahu. They were using bird netting, designed to keep birds out of gardens, to catch the beetles entering and leaving a large pile of dead coconut material, where they mate and lay eggs.

“We did observations and took data there,” Quitugua said. “There were a lot of beetles coming out of the green waste, and the netting was trapping some, but not all. When we got back to Guam, we tested a number of other types of netting.”

One was the tekken netting, a gill net used by Chamorro fishermen, which they found out about from local fishermen Johny “Atulai” Taitano and Frank Cushing, who were using their gill nets over compost piles on their properties.

They found the tekken netting had the best size of spacing between the filament, resulting in a 70% capture rate. Ideally, it was also affordable and easy-to-use.

“We’ve caught thousands using that method,” Young said, estimating they’ve caught a total of 6,000 beetles over the past six years, which has effectively slowed their spread.

UOG extension agents are now assisting the golf course with planting ironwood trees in place of the palm trees, with 250 planted so far.

How to trap rhino beetles

For residents and businesses wanting to protect their coconut palms and control the spread of the rhino beetle on their properties, tekken netting can be purchased at Guam Home Center in Dededo. They can also reference the “Trapping Methods” brochure published by University of Guam Cooperative Extension & Outreach or contact: