Home » Isla Center For The Arts » Our Audience

The Isla Center for the Arts at the University of Guam is the only non-commercial art gallery on Guam.  Because of this unique position, the entire population of the island could be considered as a broad potential audience.  Isla serves an island population of approximately 120,000, divided ethnically as follows: Chamorro (native Guamanian) 40%, Asian 23%, Filipino 20%, White 10%, Other Pacific Islanders 4%, African-American 2%, other minorities 1%.  To achieve maximum utilization of its limited resources, the programming efforts of the Center have been designed to reach specific segments of the island audience. 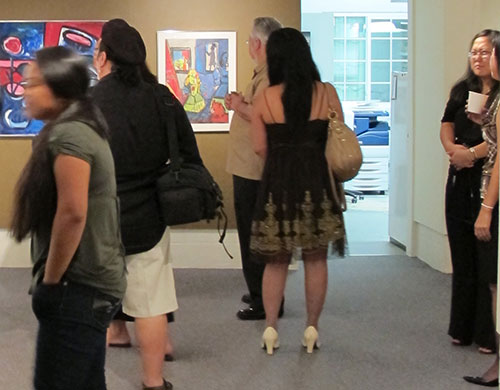 The exhibitions at the Center do not "play down" to children and are definitely not "children's shows," but cover a sophisticated range of subjects. However, the staff of the Center ensures that each exhibit has elements which would pique the interests of grade school students. Isla has the full cooperation of the Department of Education, the principals, and teachers who consider Isla exhibitions and programs valuable adjuncts to the school curricula. The staff of Isla keeps the schools informed about upcoming exhibits and suggests ways in which the shows can be integrated into the curricula.

Field trips to the gallery are scheduled with school hours in mind, visiting students are given guided tours of each exhibit, and tours are supplemented with take-home activities related to the exhibits.

University art instructors integrate exhibitions with study plans, assign reaction/research papers, and have students study exhibited works. The Center provides guided tours and arranges lectures and workshops by visiting artists in conjunction with the concurrent exhibit. For example, in the exhibit "Timeless Visions, Gentle Thoughts: The Prints of Atsushi Shimizu," Mr. Shimizu came to Guam and conducted a series of mezzotint workshops for University students which were also open to the public.

The general public is invited to attend all exhibitions. Exhibit openings and lectures are specifically scheduled for evening hours so that the working public can attend. Many adults visit the Center as a result of word-of-mouth advertising, or are brought by their children who have previously seen an exhibit with their school class. Attendance by the general public has grown steadily in the last few years.

It was not until mid-year of calendar year of 1996 that Isla began negotiations with the Guam Visitor's Bureau and the various tour companies on island regarding inclusion of Isla on the list of tourist destinations. Most tourists visiting Guam are from Asian countries. They travel in groups via tour busses, and not individually. To date there have been very few tourists groups visiting the gallery; however, in the future, this could develop into a sizable segment of Isla's audience.