Home » Isla Center For The Arts » Our Collections

A specific purpose of the Center has been that of collecting and preserving extant examples of indigenous Micronesian arts and crafts. Therefore, the majority of the current collection comprises items acquired from Guam and its neighboring islands. The collection includes very fine examples of indigenous weaving, carving, and ceremonial arts. Other nearby Pacific island groups represented in the collection include Indonesia, Polynesia, and the Philippines. A parallel purpose of the Center has been to expand the cultural awareness of people of the area by exposing them to a wide range of international art traditions. Works in the collection from Asia (Japan, China, Korea, and Taiwan) include tea ceremony accouterments, carved blocks for printing fabrics, and ukiyo-e prints. One hundred European graphic art prints improve the scope of the collection,. These include etchings, engravings, lithographs, and woodcuts (e.g.. a complete set of Francisco Goya's Los Caprichos, Grove of Olive Trees by Aristide Maillol, and The Ship of Fools by Albrecht Durer). 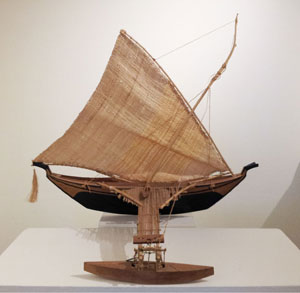 The current collection is comprised of art which was accumulated by Isla primarily between 1980 and 1989, under the supervision of its first Director, Dr. Marvin Montvel-Cohen, who was a professor of cultural anthropology at the University of Guam. In addition, private collectors have donated objects to the collection, confident that the works would be appreciated and appropriately displayed and stored by Isla. With the absorption of Isla into the University administrative structure, all art owned by Isla is considered to be the property of the University.

Following the death of the original Director, the anthropological continuity has continued through the guidance of Dr. Donald Rubenstein, a professor of anthropology with the Micronesian Area Resource Center at the University of Guam who is currently a member of the Isla Advisory Board. Through his expertise, the continued excellence of the Isla collections has been guaranteed.

Isla has received considerable publicity in the local print and television media regarding its interest in and collection of traditional Micronesian art forms and is recognized locally as a major repository of Micronesian art. For this reason, local collectors who wish to donate art works for personal or tax purposes, have given these items to Isla. Since 1989, University-purchased additions to the collection have been limited by budgetary constraints, and private donations at this time are limited by the lack of secure, climate controlled storage. The only donations which are accepted are those which can be safely stored.

The origin of Isla's collection was the need of the art faculty for a teaching resource and explains the range of examples of European, American and Asian art. Graphic art prints from the collection are used constantly by professors of printmaking, art history, and drawing to illustrate Western and Asian traditions and techniques. In-gallery drawing classes use three-dimensional folk objects from the collection as subject matter enabling students to become familiar with Western Pacific motifs and designs while improving their drawing skills.

Since the inception of the Center, the cultural ethnicity of the island has faced an onslaught of "mainland 'Americanism.'" As a reaction to this overwhelming influence, the people of Guam have become more aware of their own heritage and this has manifested itself in a growing interest in the indigenous arts and crafts of Micronesia. Archaeological digs on Guam have revealed many religious sites, artifacts, and other interesting facts about the original inhabitants of the island. With the increasing interest in the history of the region, there has also been an increase in the public interest in the objects in Isla's collection.

In response to this growing interest, Isla has assembled several small, portable "mini-shows" of thematically related items from the permanent collection. These materials are taken into area classrooms where they serve as visual aids for short talks by Isla staff on various aspects of Micronesian culture.