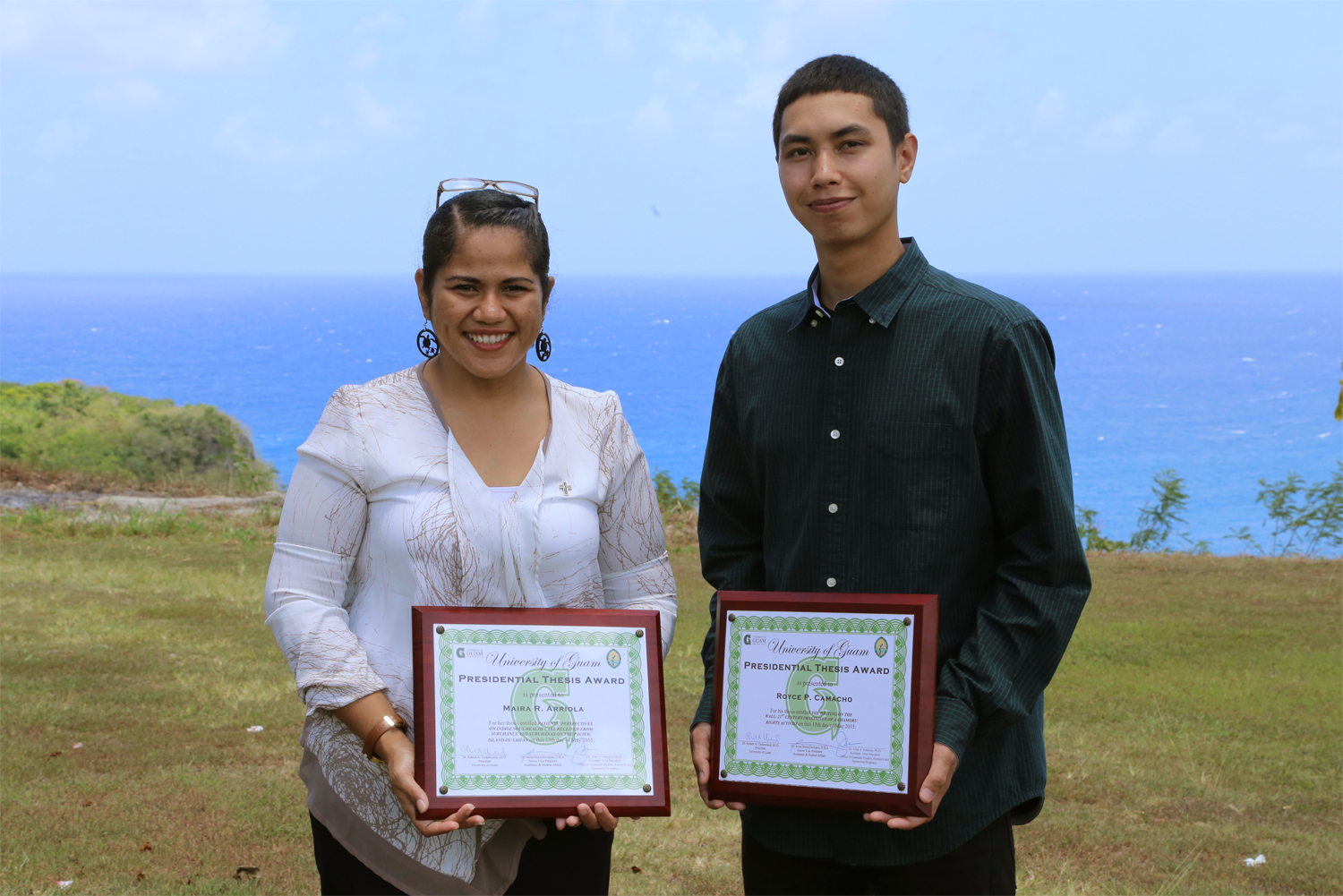 Graduate students Maira Arriola (left) and Royce Camacho were recognized with the Presidential Thesis Award on May 13.

“I’m very pleased to see a growing interest in relevant topics that have meaning not only to this island but to the region,” said Dr. Anita Borja Enriquez, Senior Vice President for Academic and Student Affairs. “I’m proud of UOG for providing an ecosystem of support for these two scholars.”

Camacho, who received a Master of Arts in English, explored the various identities of former Sen. Angel Santos in his thesis titled, “The Writing on the Wall: 21st Century Imaginings of a Chamoru Rights Activist.

“I saw this void in the literature on his activism in terms of his writing,” he said.

Arriola, who received a Master of Science in Clinical Psychology, used this opportunity to continue preliminary research from her senior honors thesis that focuses on the role of traditional healers in treating mental health. Her thesis is titled, “Patients’ Perspectives on Indigenous Healthcare Received from Suruhanus and Suruhanas from the Pacific Island of Saipan.”

“Often times, the literature focuses on the healers not the patients,” she said. “My thesis is about celebrating our practices of traditional healing.”

Along with plaques, the students were given a financial award of $500 each as recipients of the Presidential Thesis Award. Both Camacho and Arriola said it was an honor, noting the impact their studies have to the perpetuation of the Chamorro culture.

Students are selected at the end of the academic year after each graduate studies program submits its nominee for the award. A committee appointed by the graduate council then deliberates and chooses winners. This year, four students were nominated for the award.

Royce said that the University of Guam staff and English masters program have been invaluable to completion of his thesis.

“I can’t imagine doing what I’ve done somewhere else,” he said. “Being here makes it that much easier.”

Arriola, who’s originally from Saipan, said attending UOG from undergrad until now has been a great experience because she gets to be close to home but also surrounded by a larger academic community.

“It’s a great opportunity,” Arriola said. “I’ve grown as a person just being exposed to the university community.”