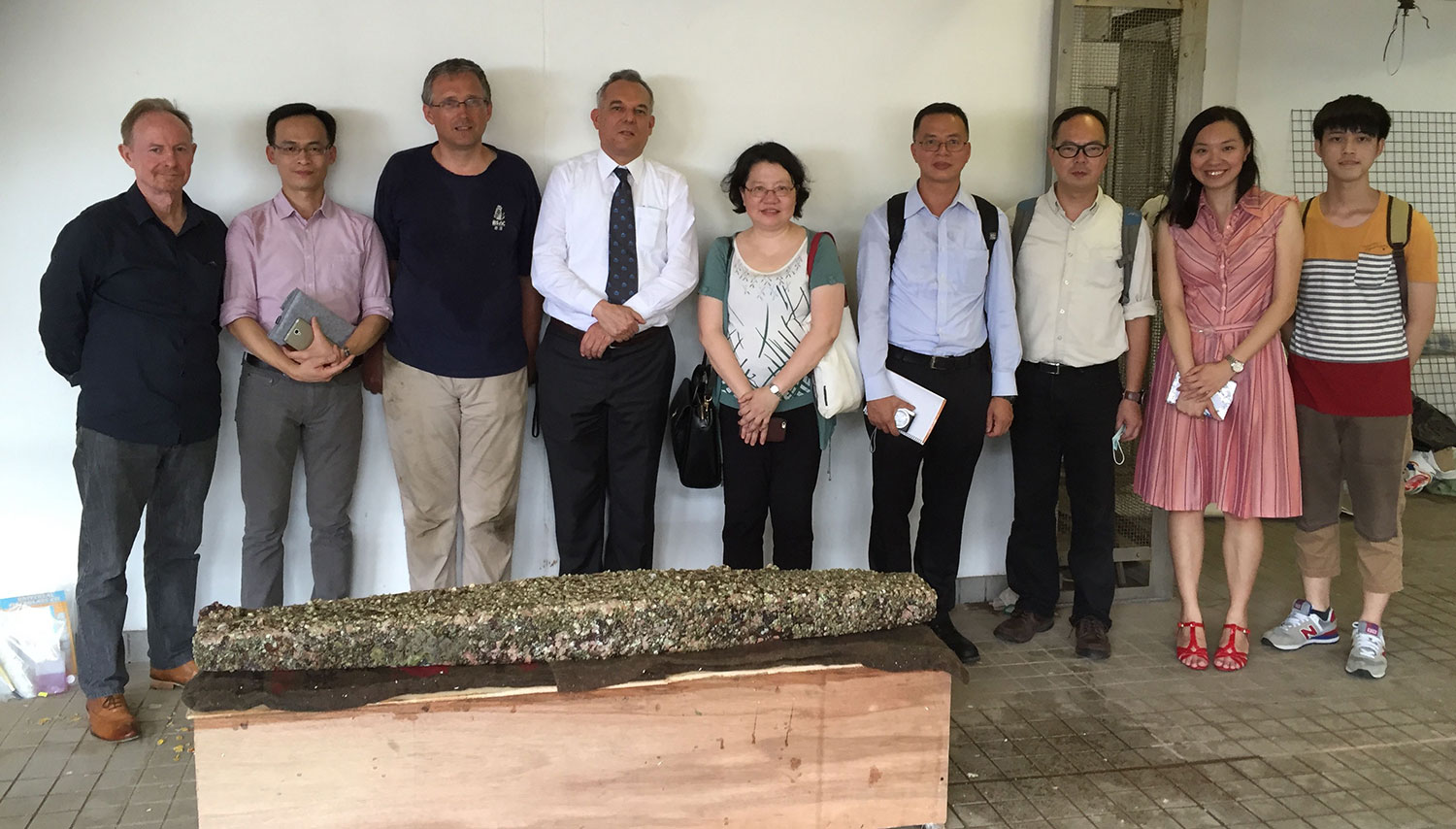 Dr. Bill Jeffery (first from the left) stands with staff from the Leisure and Cultural Services Department and Hong Kong maritime Museum with the ancient Chinese anchor stock.

He knew he had come across something special.

The size and shape—oblong and nearly the length of a barbell—it looked nothing like the nearby rocks situated in the murky, shallow waters off the coast of High Island save the ocean wear and tear. But it did remind him of something he saw at the Nanhai No. 1 & Guangdong Maritime Silk Road Museum in YangJiang a while back.

“I noticed this object that’s straight and nicely formed,” he said. “I’ve seen one in a museum in China—a smaller version maybe from a local coasting vessel.” 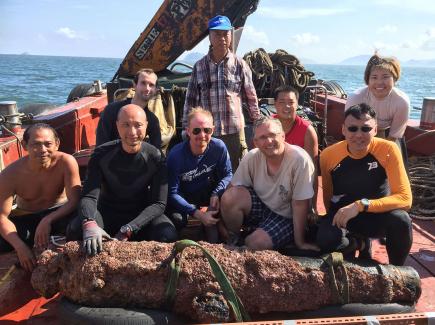 Dr. Bill Jeffery, associate professor of Anthropology at the University of Guam, and a team of about nine local divers from Hong Kong two years ago were surveying ceramics in the eastern part of Hong Kong’s waters when they stumbled upon an archeological find that later would be determined to be Hong Kong’s oldest maritime artifact.

Covered in barnacles, rocks, and other hard matter accumulated on the outer surface arose from the water an anchor stock that dates back to China’s Song Dynasty—almost 1,000 years old—excavated in July by Jeffery and the Hong Kong Underwater Heritage Group. And according to the maritime archeologist, this crossbeam once mounted to the top of an anchor is not an unusual find for those waters.

“For 2,000 years, ships would have been sailing through Hong Kong waters,” he said, rounding the southern tip of Hong Kong and sailing west into what is now called Guangzhou, which, many years ago, served as a trade hub for the surrounding areas.

Shipwrecks and plundering pirates could be the reason why parts of ships such as the anchor stock could be found in Hong Kong’s waters hundreds of years later, Jeffery said, which is why it came as no surprise when a second treasure was found just less than two miles away from the anchor stock site. 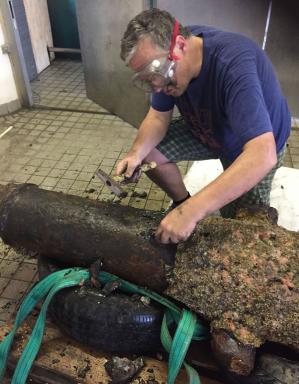 Conservator Paul Harrison from the Hong Kong Maritime Museum chips away at the hard matter accumulated on the surface of a centuries-old cast iron British cannon found off the coast of Hong Kong this summer.

Sunken beneath 14 meters of water perched upon an underwater ledge sat a 6 ft.-long cast iron cannon glued to the seabed by shells and algae.

“We spent 20 dives carefully chipping around the edges on both sides of the cannon,” Jeffery said, and with the help of a car jack and a lift bag, he and the other divers were able to successfully raise the cannon out of the water and tow it to the crane boat waiting nearby.

Back on land, a little more chipping away at the concretion revealed a British crown symbol near the cascabel and the letters E, T, C, embossed below. Although archeologists have yet to determine the exact company to which the cannon belonged, Jeffery said it’s not more than a couple hundred years old.

Now housed at the Hong Kong Maritime Museum, the artifacts are in the hands of a conservator who treats the materials to stop decay and prepares them for display at the museum.

“Archeology doesn’t stop at the waterline,” Jeffery said, noting the cultural significance of maritime artifacts waiting to be found just below the ocean’s waves. “Not much has been done to look for or survey for materials underwater so it’s important to show Hong Kong that there are artifacts in the water. And with the techniques and sophisticated technology, it’s relatively easy to survey and excavate.”

Jeffery hopes that with these two new discoveries, the government and people of Hong Kong will invest more resources into underwater surveys in search of ancient artifacts sitting just a few feet from the shoreline.

Anchor stock by billjeffery on Sketchfab

A 3-D rendering of the anchor stock, shown above, was composed by Jeffery with software purchased through a College of Liberal Arts and Social Sciences Creative Scholarly Research Seed grant.