Shown above is the betel quid--the nut packaged with added ingredients.

Culturally, the chewing of areca nut—or betel nut—can be traced throughout history and is widespread not only throughout the Micronesian region but globally in parts of Asia, Africa, Europe and the United States.

But research detailing the impact the various methods of chewing areca nut has on the human body is less established than the practice itself—leaving little information available to help doctors, researchers, and even the public understand the effects. 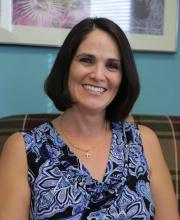 Dr. Rachael Leon Guerrero, a Principal Investigator for the University of Guam’s recently renewed U54 cancer research grant, said two of the three research projects in the grant focus on understanding not only the effects chewing the areca nut but the behavioral aspect as well—answering questions such as what are some of the factors that lead people to chew the areca nut, and what will it take to get them to stop?

“We’re serving both a local and global need,” Leon Guerrero said. “Because betel nut and the oral cancer rate is higher here than it is in the U.S. Mainland—it’s an issue very unique to the region, but it’s also worldwide.”

Since 2003, the University of Guam and the University of Hawaii Cancer Center (UHCC) have been working in collaboration to advance health equity in Pacific Islanders through cancer research, education and outreach.

Last fall, the UOG was awarded a $4.3 million grant to support its ongoing partnership with the UHCC which addresses cancer health disparities among Pacific Islanders in Guam, Hawaii, and neighboring U.S. Associated Pacific Islands.

Over the years, the National Cancer Institute has invested nearly $27M ($15M UOG, $12M UHCC) in support of this partnership, funding that will continue through August 2020. 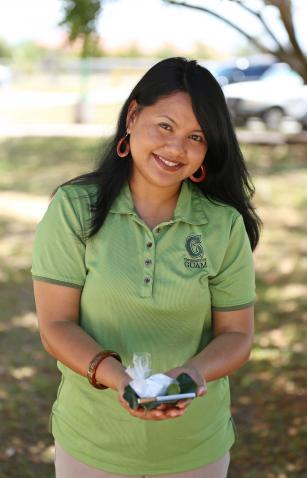 Paulino holds the ingredients of the betel quid. Current Project

“Based on our analysis, we were able to identify the high-risk group as those who chew the young betel nut and add other ingredients to it, particularly tobacco,” Paulino said. “I think the more you can educate people, I think they’ll start to listen, but the only concrete thing I can stay about betel nut chewing is that it’s always evolving.”

Both Leon Guerrero and Paulino said there is little research that directly links chewing just the areca nut and developing cancer.

“There is very little epidemiologic evidence that states the areca nut alone causes cancer,” Paulino said. “At least in what we’re seeing, when you add tobacco it does increase the risk for oral cancer,” which is why the class two chewers are the main targets of the intervention study.

Last month, Paulino attended the International Conference on Betel Quid and Areca Nut held in Kuala Lumpur, Malaysia—a two-day gathering of stakeholders from around the world looking to understand the cultural, medical and economic impact of chewing areca nut and betel quid.

“Ten percent of the world’s population chews betel nut—about 600 million people,” Paulino said. “In other countries, they are finding ways of commercializing it. In 2007, 12 percent of people on Guam were chewers.”

Collaborating with people and researchers from around the world helps propel the research forward, she said, since there are so many aspects to understanding the impact. 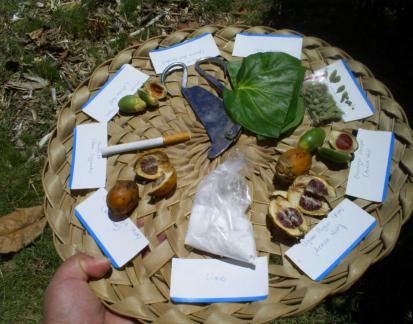 Shown above are the different elements to betel nut shewing including different types of areca nuts, ingredients such as cardamom seeds and cigarettes, scissors, the betel nut leaf, and lime used in chewing.

“When you start to involve investigators from the different disciplines, you come up with a better approach—not just to the research but translating the information into public health measures like programs or policies or education,” Paulino said. “I appreciate that we’re working more and more collaboratively. You can’t do it by yourself, and you have the expertise at the University to bring those people together.”

The trial cessation intervention, which was modeled after a tobacco cessation program, was recently approved by UOG’s Institutional Review Board (IRB) and is pending review from University of Hawaii’s IRB. Depending on the results on the intervention, Paulino said a fully developed cessation program could be the next step to helping people who wish to quit chewing betel quid.

For more information, call the Guam Cancer Research Center at (671) 735-3036 or visit online at www.guamcancerresearch.org.