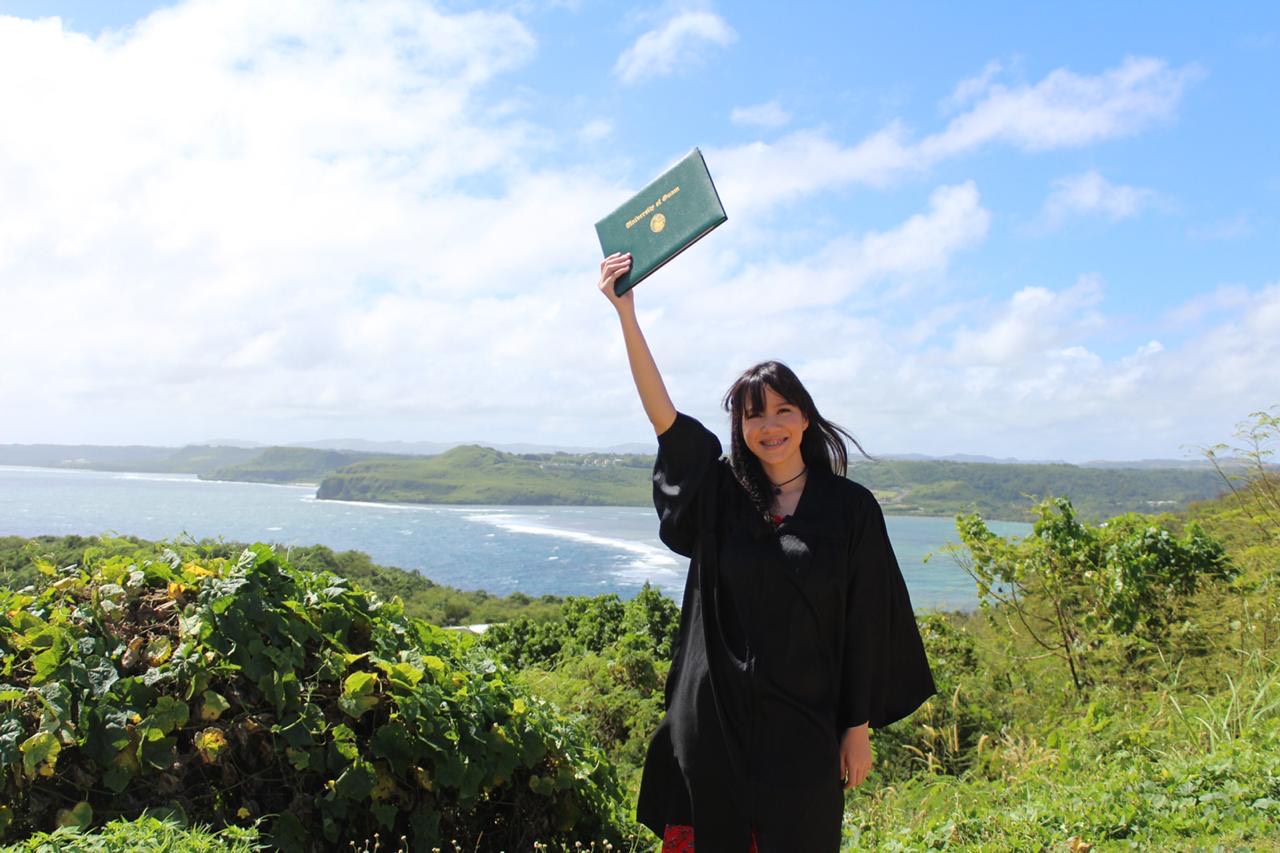 Maya Nena D. Nanpei holds her diploma up high over Pago Bay. She earned her bachelor's in English on Dec. 27, 2020, and graduated as the valedictorian of her class.

Like many high schoolers upon graduation, the world looked intimidating for Maya Nena Desnacido Nanpei. It seemed too big for her to find her place and lacked guidance, support, and direction. And considering her struggle with attention-deficit hyperactivity disorder almost prevented her from graduating high school at all, she lacked confidence that she’d be able to take on anything greater.

But over the next four years, things took a complete 180, and something happened that, as a high schooler, she never could have dreamed. She graduated at the top of her class as the University of Guam valedictorian for Fanuchånan 2020. And her journey to that point was also unlike anything she could have imagined.

“Growing up, I didn’t really enjoy going to school,” she said. “I didn’t have a firm handle on my ADHD, so it was hard for me to stay engaged in class and focus on my work. The only activity that I truly enjoyed was reading. I read during snack time, at home, and sometimes, in class — to the annoyance of most of my teachers.”

Feeling lost and unsure of herself and hoping to find some direction, she decided to cross-enroll at the University of Guam and Guam Community College, clinging to the one thing she knew she enjoyed.

“Reading, analyzing, and discussing — these were my favorite school-related activities. … I knew that I would be an English major. I declared right when I applied, and I never changed my mind,” she said.

To her surprise, her choice of study proved much more than an escape from reality. Instead of feeling alone, she found community — peers with similar interests and at similar junctures in their lives. And instead of struggling to get assignments done, she found a genuine interest in the subject matter. She bonded with her classmates over late-night essay writing, over deep discussions on literature and life, and sometimes over a good cry when stress set in.

“Staying in Guam for college was the best choice I could have made for myself,” she said. “[…] It helped me realize that it is true what everyone says: There’s no place like home.”

Getting through four years of college — a challenge in itself — was even more complicated for Nanpei, who had the additional hurdle of ADHD. Additionally, she and her classmates unexpectedly had to finish their senior year online due to the pandemic.

But alongside those challenges, she found support and encouragement from her professors and her fellow English majors.

“They stood by me, challenged me, and, ultimately, taught me lessons that will continue to shape my life in the years to come,” she said of her professors. And of her classmates, she said, “I found a home in them.”

‘I realized where I wanted to be’

Her undergraduate experience also brought clarity about what her career would eventually look like. Having had an early interest in law and having been the captain of her high school mock trial team, she had a long-term plan of going to law school, but her undergraduate activities followed a theme that revealed a different path.

She helped plan writing workshops as a member and secretary of The English Society, she was a judge for essays and creative works written by elementary, middle, and high school students in the Island Wide Writing Contest, she presented at the Language Arts Conference on classroom activities involving theater to make teaching literature more engaging, and she tutored her peers at the D.E.A.L. Writing Center on campus.

“I later realized that the classroom was where I wanted to be,” she said. “From technical skills, like grammar and mechanics, to more complex ones, like analyzation, there are so many things that can be taught in literature and composition classes. To be able to impart this knowledge onto students is something I hope I can do within my future classrooms.”

Inspiration for the future

Nanpei ended her undergraduate experience with an inspirational speech to her fellow Tritons at the Fanuchånan 2020 Commencement Ceremony on Dec. 27.

“I hope that we leave our time at UOG feeling like we belonged to something outside of ourselves,” she said, “and use that feeling to inspire us in future endeavors.”

For Nanpei, her future endeavors include gaining experience as a teacher here on island and preparing to apply to a master’s program focused on rhetoric, composition, and teaching English. Eventually, she wants to get her doctorate as well and return home to Guam to teach college-level English.

Like many high schoolers, Nanpei wasn’t sure who she was or what she wanted to become. But she followed a passion, she found a community, and she discovered the world has a place for her after all.