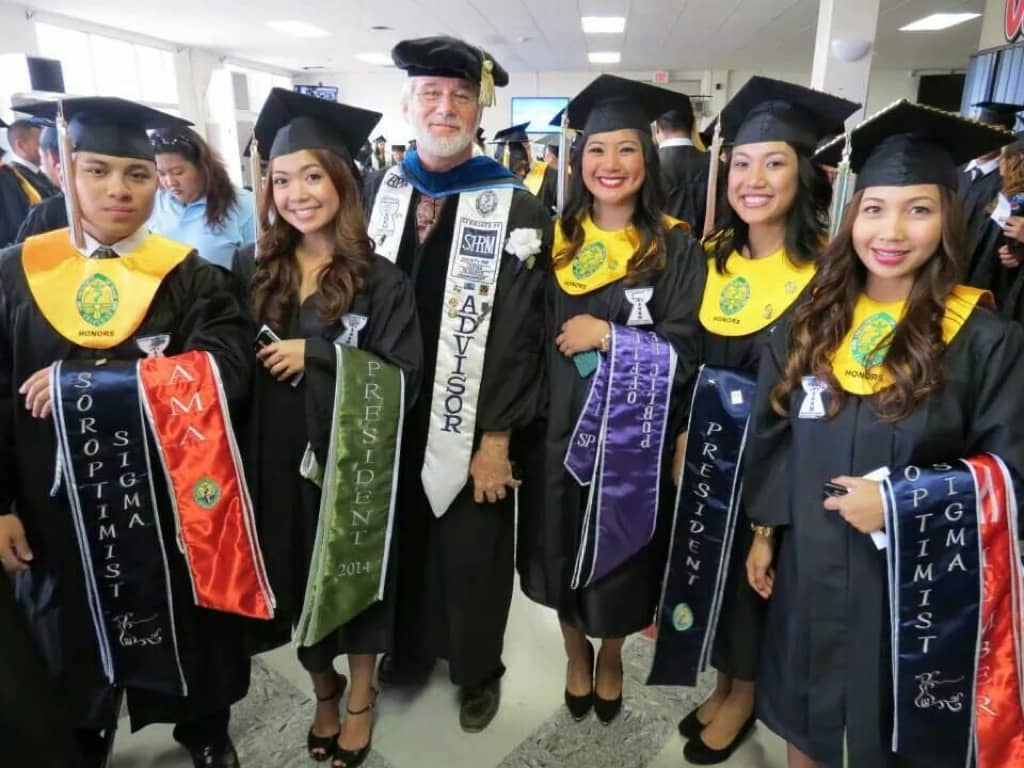 Colfax with 2014 graduates of the human resource concentration of the Business Administration program, a specialization he founded while at UOG.

A familiar name and friendly face of the School of Business & Public Administration will be noticeably absent this coming semester. Professor Richard S. Colfax — or “Papa Shmurf,” as his students came to know him — retired this semester after 26 years with the University of Guam, leaving a lasting impression on thousands of students and a well-lit path for students into the profession of human resource management.

The founding father of HR at UOG 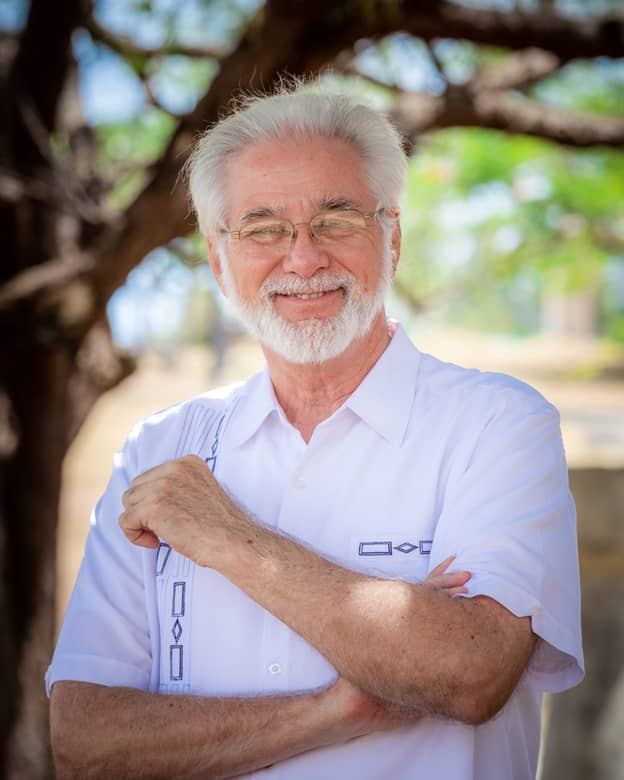 When Colfax first came to the University of Guam in 1994, the study of human resources was only a single course. Recognizing the demand within the professional business community for something bigger and encouraged by then UOG president John Salas and then president of the Guam chapter of the Society for Human Resource Management Andrew Andrus, Colfax proposed the HR courses in place today and the development of a minor. He later developed UOG’s capacity in human resource education into a concentration within the Bachelor of Business Administration program.

“I’m extremely grateful and happy that students have seen the need for HR management and discovered their potential to make it a lasting and fulfilling career,” Colfax said.

Not all students are familiar enough with human resources to venture into the program on their own, so the success of the program requires recruitment and creating opportunities for students to see themselves in the profession.

“I think if Dr. Colfax could, he would entice every SBPA student he met to major in HR,” said Annette T. Santos, dean of SBPA. “He was always such a strong advocate for the discipline of human resource management.”

One of the tools he coordinated to enrich the program was a Mock Job Fair, in which business students of varying concentrations take a role in creating fictitious companies, developing job announcements and applications, and setting up a professional job fair booth and conducting interviews. It has taken place every semester for the past five years, giving upperclassmen tangible experience in the role of an HR manager and giving younger classmen exposure to multiple careers.

Beyond the classroom, Colfax helped launch the SHRM Student Chapter at UOG in 1996 and served as the main advisor throughout his career. The chapter has repeatedly won awards from the national SHRM organization, receiving 22 consecutive Superior Merit Awards and three Outstanding Chapter Awards. Colfax was awarded as well, receiving the SHRM Foundation Advisor Impact Award in 2019.

He also completed an alignment of SBPA’s human resources degree concentration with the national SHRM eligibility requirements for the SHRM-CP exam so that graduating UOG seniors could earn the credential sooner than ever before. This year, he has gotten to witness the first five UOG graduates benefit from this and earn their SHRM-CP credentials immediately after graduating.

“Dr. Colfax went above and beyond for each student,” said Iris Guinto, a 2019 graduate of UOG’s Bachelor of Business Administration program and one of the first graduating seniors to pass the SHRM-CP exam. “He was inspirational in all his knowledge and achievements, and he was willing to share that with those willing to learn.”

He received several accolades from UOG during his career, including a UOG Faculty Award for Teaching Excellence in 1998, a Faculty Teaching Excellence Award from SBPA in 2013, and All-Star Awards from the vice president of student affairs in 1998, 1999, and 2000. He was also named Carnegie Professor of the Year for Guam in 1999.

“He was instrumental in setting professional standards for our students, both in attire and in attitude,” Santos said. “He was involved in professional organizations and represented the Triton spirit favorably. Overall, Dr. Colfax demonstrated unwavering commitment to the mission of SBPA and of UOG.”

While Colfax said there are countless memorable moments from his time with the Triton family, graduation has always been a high point. He had a long-standing tradition of shaking hands with every single graduate, whether his students or not, as they descended down from the stage. He believes that every student should be greeted, recognized, and celebrated on their major accomplishments.

Over the years, Colfax has maintained his relationships with his former students and joins them in their celebrations when they reach career and life milestones and successes.

In leaving UOG, he said he hopes he has inspired students and the UOG community as a whole to follow in his footsteps and keep learning and pursuing professional certifications.

“I hope students and everyone I had contact with continue to be lifelong learners — don’t stop. I’m still learning myself — I have more letters after my name than in my name itself!” he said.

Now retired, Colfax has plans to travel to see his grandchildren when conditions are safe and to spend more time on his writing projects and art, while continuing to stay involved with the University of Guam. The UOG Board of Regents awarded Colfax the status of Emeritus Professor of Human Resource Management, which will ensure that he continues his connections with the university.

And while he may no longer be in the halls of SBPA, mention of the name Colfax will be no less frequent as students continue to make their way down the path he paved. 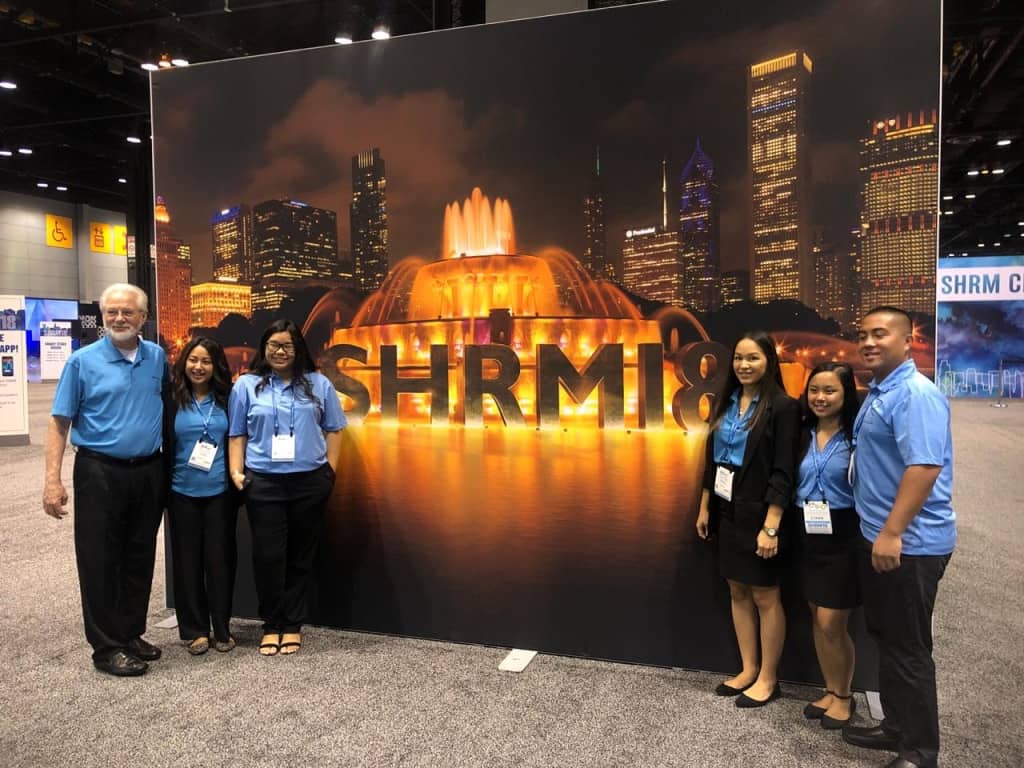 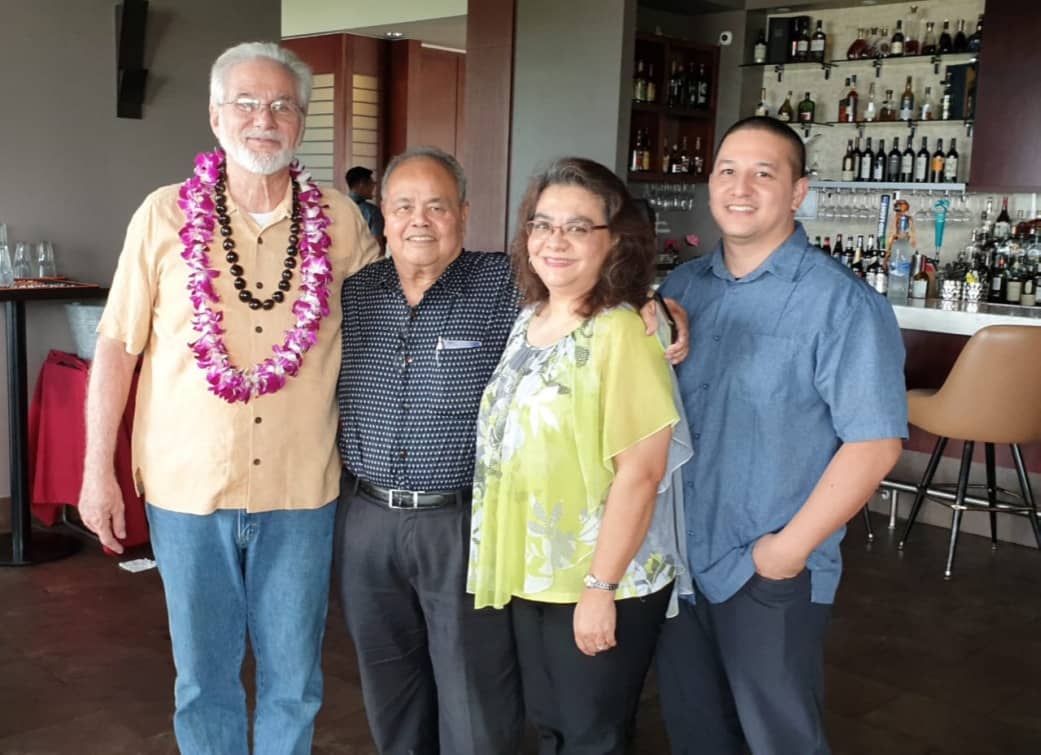 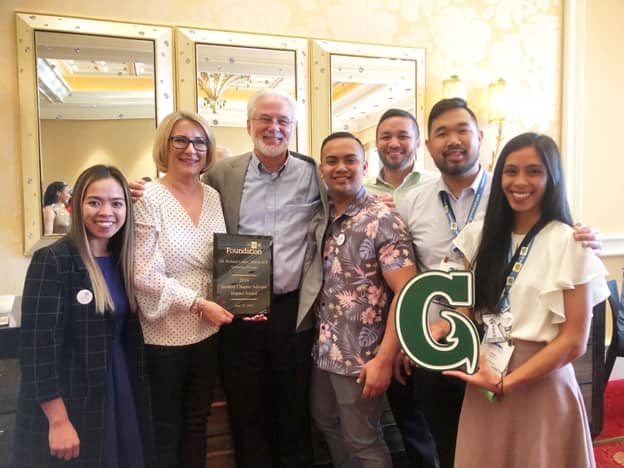