Everyone living on Guam has seen the damage to coconut palms caused by coconut rhinoceros beetles. CRB have been on Guam since 2007, but until recently, the number of palms being damaged and killed on Guam was unknown. Standardized surveys of CRB damage are needed to monitor changes over time and space, especially in response to control activities and for early detection of CRB in new geographic areas.

Previous methods for monitoring CRB damage relied on direct observation or image analysis by human experts and are too time-consuming and expensive for routine monitoring over large areas.

Moore's island-wide roadside CRB damage survey for Guam is an automated version of a survey method developed by Trevor Jackson, an entomologist working for AgResearch New Zealand. Jackson’s method is based on a five-level scale for classifying CRB damage to individual coconut palms and is being used extensively on CRB-infested islands in the South Pacific.

In Moore's automated survey, a smart phone mounted on a car or truck records continuous videos while the vehicle is driven along all major roads on Guam. The smart phone uses a couple of free phone applications: OpenCamera records videos and GPSLogger records GPS coordinates.

Recent technical breakthroughs in AI have made it much easier to train computers to recognize objects in digital images. Moore collaborated with OnePanel Inc., an AI tech company, to create and train a couple of object detectors using a technique called “deep learning.” The first object detector finds all images of coconut palms in the survey videos and classifies each one using Jackson’s damage scale. The second object detector locates and counts V-shaped cuts in the fronds of each coconut palm. Data extracted from the videos are saved in a SpatialLite database.

To visualize survey results, Moore uses Quantum GIS, to make a publicly available interactive web map. There are links on the web map to download the survey database and QGIS map project for more detailed analysis.

The first operational island-wide survey on Guam, completed during October 2020, indicated that about 19% of Guam’s coconut palms show CRB damage symptoms. The Guam surveys will be conducted bimonthly. An island-wide roadside video survey is also being done on Rota for early detection of CRB damage.

There is interest in use of roadside video surveys for CRB damage elsewhere in the Pacific, and Moore plans to evaluate drone imagery for use on islands without extensive roads. The Guam roadside video survey was designed to be adaptable by using only free open-source software (FOSS) components. Custom-written software for the project as well as videos, databases, and GIS projects from surveys will also be made available for download from public repositories hosted on GitHub.

It is interesting to note that this is not the first time that Moore has dabbled with AI. Thirty years ago he trained an artificial neural network to identify free-flying mosquitoes. 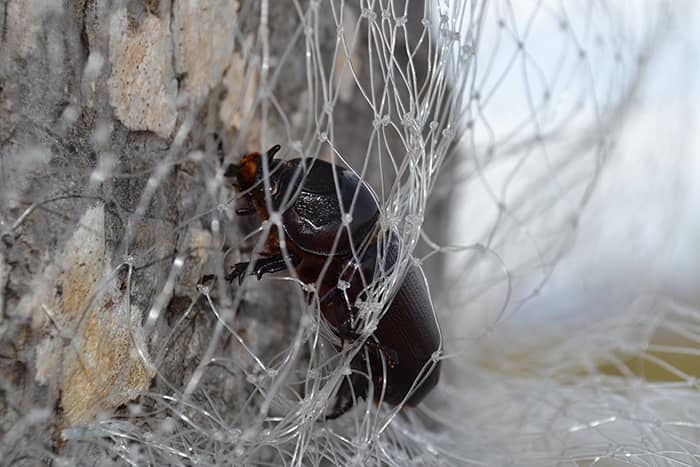 A coconut rhinoceros beetle caught in tekkan netting on a palm tree, one of the methods being used to control the spread of the beetle on Guam. 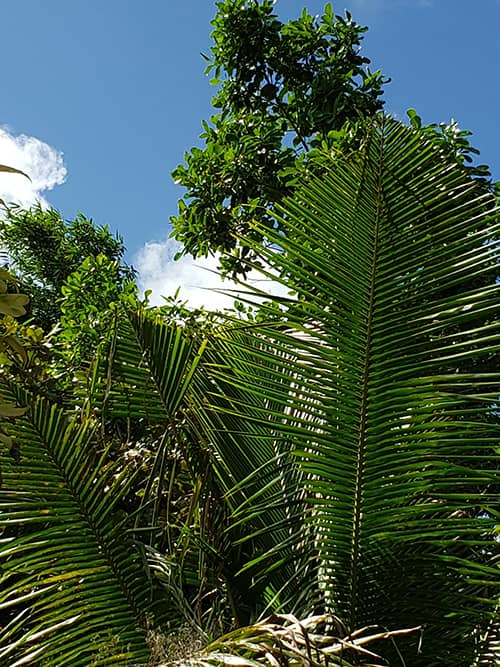 The presence of coconut rhinoceros beetles within a coconut palm is evident in the V-shaped ends of a palm frond. 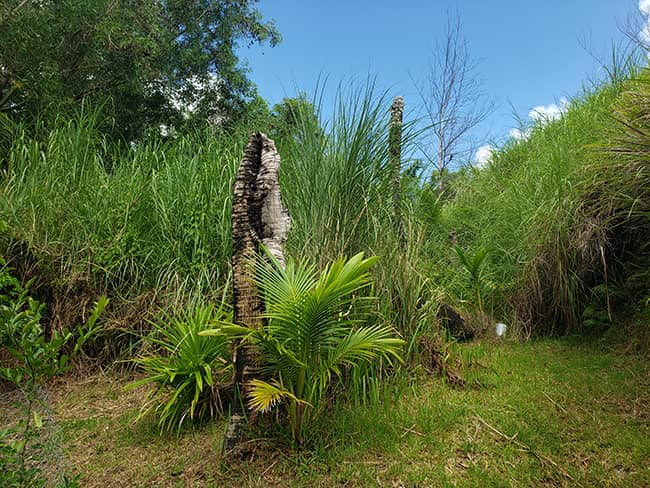 The remains of a coconut palm that has been infested with coconut rhinoceros beetles.
❮
❯
News Categories